The H.J. Andrews Experimental Forest, a 15,800-acre area in the Willamette National Forest, “is a thoroughly western Oregon place of steep mountain slopes, narrow valleys, and cascading streams that empty into Lookout Creek, the main tributary to Blue River. One of four U.S. Forest Service–designated experimental forests, “The Andrews” is renowned nationally and internationally as a site for forestry research and ecosystems studies. In this research article, William G. Robbins recounts the seventy-year history of the forest by drawing on archival resources and oral histories located at Oregon State University (OSU). Fundamental research conducted in the forest includes the characteristics of old-growth forests, maintaining heathy streams, and how northern spotted owls changed thinking on forests and prompted a shift in federal forest policies. According to Robbins, “despite its seeming anonymity, the Andrews is a busy and hospitable place that continues to expand the boundaries of our understanding of natural systems.”

In this Oregon Voices article, Pearl Alice Marsh reflects on growing up African American in eastern Oregon — recalling childhood memories she describes as “warm and delicious,” but also included “hurtful encounters with racism.” Marsh’s parents moved to Wallowa County in 1939 when her father sought work cutting timber for one of the region’s lumber companies. Many of her childhood remembrances told in this essay include her experience in a lumber town and the interactions between white and African American families. Marsh attributes her strength and character to her mother and father “who challenged racial barriers that might have impeded [her] way.” Her story is an important part of Oregon’s history as well as part of a “national story of growing up African American outside the Jim Crow South.”

Voices of the River: The Confluence Story Gathering Interview Collection

The Confluence Story Gathering Collection, a non-profit organization that conducts interviews with Indigenous people of the Columbia River, aims to broaden the history of the Pacific Northwest, which is often centered on the Lewis and Clark Expedition and migrants who came to the region by way of the Oregon Trail. In this Research Files essay, Lily Hart describes the Confluence Project, its partners, and highlights some of the stories it has collected since 2011.

In this review essay, Rich Wandschneider explores the extensive and growing literature written about the Nez Perce Indians. The Tribe first came into white Americans’ view during Lewis and Clark Expedition through Pacific Northwest in 1805 and later during the Nez Perce War of 1877. From Alvin M. Josephy, Jr.’s, 1965 publication titled The Nez Perce Indians and the Opening of the Northwest to Daniel J. Sharfstein’s recent Thunder in the Mountains: Chief Joseph, Oliver Otis Howard, and the Nez Perce War, Wandschneider takes readers through a journey of how the history of the Nez Perce has been told over the past fifty years. According to Wandschneider: “At every turn there is a story, and the literature and people who are drawn to it reflect that story as well as their own.”

Research Report: Were the HOLC Residential Security Maps the Origin of Redlining?

In this response to reader questions following a public history roundtable “Housing Segregation and Resistance in Portland: Notes on New Research,” published in the Fall 2018 issue of the Oregon Historical Quarterly, Helen Ryan surveys the history of the Home Owner Loan Corporation (HOLC) residential security maps and their effect on redlining in the United States. Kenneth Jackson first made a link to redlining and HOLC maps in a publication in 1980, but misinterpretation of his findings have led many scholars to attribute redlining practices to that agency alone. Ryan argues that “the consensus of scholars is difficult to attain on any matter, and the significance of HOLC’s residential maps and appraisal methods is no exception.” 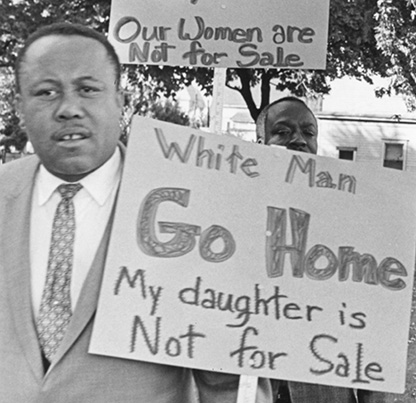 Dawson Park, located at Northeast Stanton Street and Williams Avenue, is a Portland city park located in the heart of the Albina neighborhood. On September 28, 1968, community members, frustrated by an increasing number of men seeking prostitutes in the area, protested in the park. Along with the accompanying photograph, the Oregon Journal reported that in addition to the added crime in the area that “school girls,...