Trouble in Paradise: A Historical Perspective on Immigration in Oregon

In this essay, guest editors Robert Bussel and Daniel J. Tichenor introduce a special issue of the Oregon Historical Quarterly following the November 2016 symposium, "Oregon Migrations," that gathered scholars and activists to discuss how human migration has affected the state's development. The essay provides a context for the articles in this issue, which include the stories of tribal peoples, Roma (gypsies), Mam refugees from Guatemala, African American migrants, and undocumented workers from Mexico. According to Bussel and Tichenor,  those groups all "made claims for recognition and belonging that reflect a long tradition of challenging the hegemony of Euro-American settler-colonialists in Oregon who consciously created mythic images of pioneer virtue to reinforce their sense of entitlement and privilege."

Tribes of the Oregon Country: Cultural Plant Harvests and Indigenous Relationships with Ancestral Lands in the Twenty-first Century

Documented human presence in Oregon dates to at least 12,000 to 14,500 years ago, and Oregon Tribes "have ongoing legal, ecological, and cultural relationships with their ancestral lands even when they have been forcibly removed from them." In this article, the authors discuss research they conducted to document the importance of understanding Native cultural plant harvesting and access rights on U.S. government land. The authors argue that "to sustain the Pacific Northwest's ecosystems and all the people who now call the region home, then there is a role for management that includes traditional knowledge….because Indigenous systems for tending plants and animals have been influencing forests and sustaining humans for millennia."

Roma have resided in Oregon since the early twentieth century, however, many Oregonians know little about the community beyond "gypsy" stereotypes. Although Romani people arrived in the state from Europe, most Oregonians treated them as non-White outsiders. In this research article, Carol Silverman describes the history of Roma in Oregon — immigrants that are often ignored by scholars — and "highlight[s] the tension between continuous discrimination and the challenge of keeping Romani language and culture vibrant." Through strong family and community ties and selective integration, Romani remain resilient.

In this research article, Lynn Stephen documents Mam Indigenous people immigrating to Oregon from Guatemala seeking refuge from violence and harsh economic and social inequities. "For many Guatemalans...who fled violence in their home communities, seeking asylum in the United States is one of the only routes to safety." Since the 1980s, Mam have brought to Oregon a diversity of languages and cultures, relying on transborder social connections to create new lives and communities. As Stephen argues, "like Germans, Swedish, Irish, English, and other immigrants who have settled in Oregon, Guatemalan immigrants are adapting to the state and integrating their families into local communities, bringing with them unique skills and knowledge."

While conducting research for his Ph.D. dissertation on the Bracero Program, Mario Sifuentez discovered a troubling lack of documentation on those workers in the Pacific Northwest. According to Sifuentez, "the voices of the people I was trying to write about were absent. Official documents treated braceros like data in a mathematical equation on agricultural output." Having grown up in eastern Oregon in a family that had been coming to the Northwest for generations to work in agricultural fields, this research was deeply personal. Sifuentez began recording oral histories of braceros in the Pacific Northwest that were eventually uploaded the online Bracero History Archive and led to his recently-published book, Of Forests and Fields: Mexican Labor in the Pacific Northwest.

At this public history roundtable, a group of scholars and holders of community history gathered for a discussion on public history projects related to Oregon migration. Gwen Trice, the daughter of an African American logger in Maxville, Oregon, described how the Maxville Heritage Interpretive Center educates visitors on Oregon's early timber industry and the effects of discrimination. Gabriela Martínez, a journalism professor at the University of Oregon, presented a collaborative project to produce a special traveling exhibit on Latino history in Lane County, Oregon. Urban designer Suenn Ho described her work as designer of Astoria's award-winning Garden of Surging Waves, a community space that invites visitors to consider the experience of Chinese Americans.

In the Shadow of the 2016 Election: Immigration Debates in Oregon and Beyond

In this record of the lunchtime panel discussion moderated by Daniel J. Tichenor of the University of Oregon Wayne Morse Center for Law and Politics, panelists discussed the issue of immigration following the 2016 presidential election. Touching on the importance of discussions about immigration leading up to the election, demographics in the electorate, and how immigration advocates are mobilizing following the election, the panelists also engaged the audience with a question and answer session. 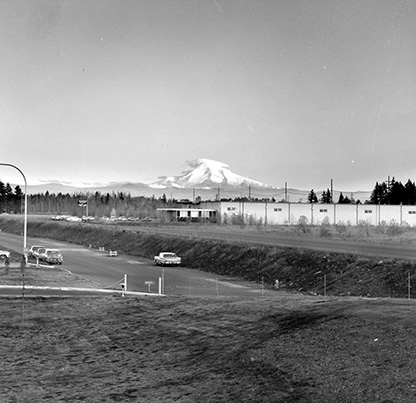 This view looking east toward Mt. Hood from the new John Deere Regional Distribution Center is near the corner of 181st Street and San Rafael Street in Gresham, Oregon. The photograph, one of a series, was taken in November 1965 by Photo Art Studios on behalf of Deere & Company for their annual report at a cost of $250.00. Gates Rubber Products, no longer at this location, is visible in the distance.