The Unwanted Sailor: Exclusions of Black Sailors in the Pacific Northwest and the Atlantic Southeast

Jacki Hedlund Tyler, a recipient of the 2014 Donald J. Sterling, Jr., Graduate Research Fellowship in Pacific Northwest History, documents little-known Pacific Northwest sailor laws and their role in racial oppression in Oregon. Tyler compares Oregon’s early black sailor laws, beginning prior to the Civil War and continuing past statehood in 1859, with Negro Seaman Acts of slave-holding states in the Atlantic Southeast. On both coasts the laws helped “legitimize claims of authority and ownership made by white inhabitants over non-white populations” and were “linked to debates over the institution of slavery; the desire to regulate maritime trade; and efforts to prohibit the spread of ‘contagion’ in the form of racial hostilities.” This research article is an important addition to the history of black American sailors during the nineteenth century.

During the mid nineteenth century, non-Native settlement and activities disrupted and changed historic Chinook and Clatsop communities at the mouth of the Columbia River. Indian Place in what would be Seaside, Oregon, became home to a number of displaced peoples and an enclave where “the living gathered with the remains of the dead,” for “modest protection from the apocalyptic changes that so radically disrupted tribal lands, lives, and worldviews.” Douglas Deur documents tribal migration to the Indian Place during the late nineteenth and early twentieth centuries and calls attention to many of its significant early residents. Transitional communities such as Indian Place, Deur attests, “defined the nineteenth- and early-twentieth-century Native experience in northwestern Oregon and beyond.” While the Indian Place no longer exists, it remains an “important [conduit] for tribal cultural knowledge, values, and practices that endure today.”

The Malheur Occupation and the Problem with History

In this essay, William G. Robbins reflects on the 2016 armed occupation of the Malheur Wildlife Refuge in Harney County through the lens of land ownership history in Oregon. The occupiers, Robbins argues, “raised timeworn historical issues regarding the federal estate in the American West: access to and use of land, the legal boundaries between public and private ownership, and the constitutional questions involved.” Oregon is one of twelve public-land states, with 52.9 percent of its land is under federal jurisdiction, and “many residents feel excluded from decision-making.” Robbins asserts, however, that “states have been intimately associated with federal initiatives from the beginning,” and the Malheur occupiers’ motivations for privatization of public land in Oregon based on a “misconstrued history.”

Writer Frederic Homer Balch dreamed of becoming a writer as a young boy, and is most notable for his role in Pacific Northwest literature and his 1890 novel Bridge of the Gods. Richard W. Etulain explores Balch’s career and personal development to document some of the defining moments in the author’s life. In his youth, Balch moved frequently with his family as his father sought work. During their travels, he became acquainted with Oregon and the Washington territory, which served as inspiration for many of his novels. Throughout most of his adult life, Balch struggled with what he deemed an irreconcilable conflict between his faith and desire to write fiction. Although Balch’s climb to recognition was slow, Etulain suggests in this essay that “Balch deserves attention as a talented, pioneering novelist of the Pacific Northwest.”

A Conversation with Geoff Wexler: Photography and the Davies Family Research Library Collections

Jennifer Strayer interviewed the Oregon Historical Society’s former Library Director Geoff Wexler about his work to “provide greater visibility for archival collections, not only through the traditional venues of library reading rooms but also through innovative exhibits that ease the tension between art and duration, history and imagination.” In this Oregon Voices piece, Wexler discusses the Oregon Historical Society’s photograph collection, which “is estimated to be around six to seven million images” in collections ranging from studio portraits to landscape photography to newer acquisitions of two large African American collections. OHS is currently working on a new digital infrastructure that will greatly expand online access to its archival images, a collection that has been built by “many years of labor of previous staff members,” and “without their work, OHS would not hold one of the premier photography collections in the United States.” 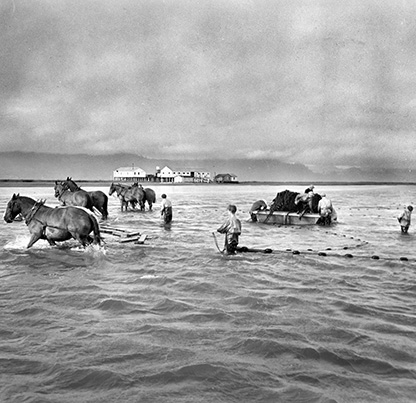 For thousands of years the Columbia River has supplied people with fish, especially salmon. Fishing has taken many forms, including Native Americans fishing from platforms at Celilo Falls and Willamette Falls and fish wheels operating twenty-four hours a day. In the late nineteenth and early twentieth centuries, Astoria’s canneries were supplied by fishermen using seine nets pulled through the water of the Columbia...