Between 1981 and 1985, the intentional community of Rajneeshpuram near Antelope, Oregon, hosted up to 15,000 followers of Bhagwan Shree Rajneesh, a spiritual leader from Pune, India. In this essay, Carl Abbott examines the rise and fall of Rajneeshpuram within the context of western history, which "centers on the processes of migration, settlement, displacement, and rearrangement." Drawing parallels to earlier religious closed communities, such nineteenth century Mormon settlements, Abbott describes how Rajneeshees fit into the "overarching storylines of frontier utopias and the…narrative of settler colonialism." Unlike Mormon communities, however, Abbott concludes that Rajneeshpuram ultimately failed because its leaders were not willing to compromise community goals when faced with larger state regulatory systems.

The Value of a Historical Landscape: Heritage and Nature at Bridal Veil

Few traces of the company town of Bridal Veil exist today, and its transformation from a remnant industrial landscape to an ecologically focused scenic area caused considerable debate during the 1990s. That debate reflects a larger national discussion on evaluating significance of cultural resources. The Bridal Veil Falls Timbering Company established the town in the 1880s to support its timber harvesting efforts, which continued well into the twentieth century. The company's operations over eight decades left a historic imprint no longer visible today, a transformation that Benac argues "destroyed a valuable piece of cultural heritage, one that locals and cultural resource professionals sought to save."

by Nate Pedersen and Jeffrey Johnson

In 1924, Frank T. Johns was nominated as the Socialist Labor Party's (SLP) candidate for president of the United States. Known as "Comrade Johns" by fellow SLP party members, Johns became interested in socialist industrial unionism as a young mail carrier and became an outspoken proponent of SLP principles. During his 1924 presidential run, Johns won only 0.1 percent of the national popular vote, but the SLP was thrilled by his sincere "dedication to his party's principles." Johns became the party's candidate for president again in 1928, but died during a campaign speech while attempting to rescue a drowning boy from the Descutes River. "Socialism in the century's first two decades was viable political philosophy," the authors explain, and Johns's short political career "offers documentation of the brief but important SLP moment both nationally and in Oregon."

Pearl Alice Marsh shares her father's story as an African American logger in McNary, Arizona, Wallowa County, Oregon, and Kyberz, California. Amos Marsh, Sr., began his journey as a farmer in Jackson Parish, Louisiana, looking for better working conditions, wages, and a chance to escape the harsh realities of Jim Crow laws in the South. Many African Americans migrated from the South to mill towns in the Southwest and West between 1920 and 1960 — "'every Tom, Dick, and Harry was hoboin' somewhere' in search of jobs," as Marsh said. He arrived in Oregon in 1939 with his wife and young son to work for Bowman-Hicks Lumber Company in Maxville, where he stayed until about 1959. "Marsh's time working in the logging industry…is an important piece of the histories of Oregon's African American community, Wallowa County, and the state's lumber industry."

The contents of an old steamer trunk found in the basement of a Portland home were on display in a summer 2015 exhibit at the Old Portland Hardware (OPH). "What, at first glance appeared to be a 'random collection of vintage ephemera from the 20s and 30s'," told the story of James L. Wasson's life in Portland's Albina area from the 1920s through 1980. Wasson was a soldier during the Mexican Revolution and World War I and worked as a mechanic and automobile electrician. His passion for photography is well documented throughout the trunk's collection, including self-portraits, negatives of portraits of Portland's African American community members, a receipt for professional photography equipment, and numerous photographs of his wife Marcelita. OPH donated the collection to Portland State University Library Special Collections, where it is open to the public for research. 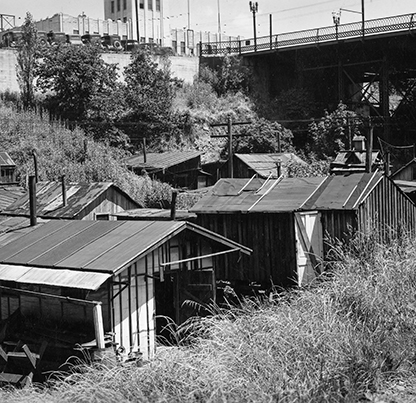 Before I-84 existed, next to the train tracks in Sullivan's Gulch and between Northeast Twelfth and Northeast Twentieth streets, a village made of temporary buildings offered shelter to those who had lost jobs and homes during the Great Depression. Across the country, people built thousands of such shelters, often called Hoovervilles (in reference to President Herbert Hoover). By June 1941, when this photo was taken,