They Came for the Harvest: The Bracero Program in Jackson County, Oregon, 1951–1955

Following its entry into World War II in 1942, the United States entered into labor agreements with Mexico to alleviate severe labor shortages in the agricultural industry. The agreement established the Bracero Program, which continued past the war into the 1950s. In Jackson County, Oregon, agriculture has long held a prominent position in the region’s local economy, and the industry has been challenged to find sufficient labor for the annual pear harvest. In this research article, Madelina M. Cordia examines the Rogue River Valley pear industry following World War II, “a significant, yet understudied decade in Oregon’s relationship with the Bracero Program.” While many scholars agree that the Bracero Program across the country resulted in growers exploiting Mexican laborers, however, in Jackson County, “the program may have come remarkably close to meeting its stated goals of a mutually beneficial arrangement between Mexican workers and American growers.”

“What’s in a name?”: The University of Oregon, De-Naming Controversies, and the Ethics of Public Memory

by Matthew Dennis and Samuel Reis-Dennis

In this essay, Matthew Dennis and Samuel Reis-Dennis explore the significance of honorific building naming on college campuses. According to Dennis and Reis-Denis, “questions about honorific naming opportunities…are not just academic — they are edifying. In 2015, African American students at the University of Oregon presented university president Michael Schill with a list of demands to address racism on campus, including removing the names of Matthew Deady and Frederic Dunn from campus buildings. Deady, a prominent lawyer, judge, and president of the 1857 Constitutional Convention, held pro-slavery views and advocated for black exclusion but also protected Chinese who faced discrimination and violence. Dunn, a classics professor at the university from 1898 to 1937, helped lead Eugene’s chapter of the KKK as its Exalted Cyclops. Ultimately, Schill decided to rename the Dunn building but not Deady Hall, a move the authors suggest “excused the inexcusable,” and elevated Deady’s efforts on behalf of Chinese inhabitants over his racist views.

In this Oregon Voices piece, Li Chen documents six Chinese students who pursued legal studies at the University of Oregon in the early twentieth century. “Set against the backdrop of ignominious exclusion practices  that limited Chinese economic and geographic mobility,” Li explains, “are the relatively unknown stories of these six path-breaking Chinese law students.” Their previously untold “stories of pursuits and exclusion that encompassed the first half of the twentieth century,” and as such are important accounts in the state’s history. 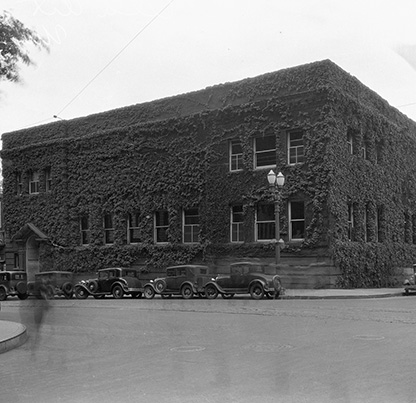 This ivy covered building, located at the corner of Southwest Fifth Avenue and Taylor Street in downtown Portland, Oregon, was the second location of the Portland Art Museum (PAM). Founded in 1892, PAM’s first space was located in a public library at the corner of Southwest Seventh Avenue and Stark Street and was primarily a venue for small exhibitions. The museum, expanding in collections and staff, quickly outgrew...