Between 1790 and 1793, John Hoskins created a map of the Northwest Coast of North America that included ninety-one place names documenting Native communities. The map is the earliest example of such detailed documentation by an American and was rediscovered in 1852 at the Cartographic Archives Division of the National Archives and Records Administration. In this research article, James Walker and William Lang provide a historical context for the map, including comparative charts that break down the Native names that Hoskins documented into seven cultural groups. According to Walker and Lang, the map “opens a window to what American traders knew, what they perceived about the region, and what they may have understood about the Native landscape.”

Women’s “Positive Patriotic Duty” to Participate: The Practice of Female Citizenship in Oregon and the Expanding Surveillance State during the First World War and its Aftermath

Kimberly Jensen explores the practice of visible female citizenship in America during and after the First World War. During that time, thousands of women in Oregon participated in “visible civic pageantry” associated with national Liberty Loan drives and “an emerging surveillance state that included new strategies for scrutiny.” Jensen documents local and national forces “on women to conform to wartime norms,” and highlights ways in which women resisted wartime surveillance that challenged their civil liberties.

In this introduction to the Oregon Historical Quarterly’s virtual roundtable on the centennial anniversary of World War One, Kimberly Jensen and Christopher Nichols explain that the war sparked “many complex questions and changes to Oregon and the nation.” Jensen and Nichols provide context for and highlight important arguments from the roundtable essays that highlight that one hundred years later, “we are still gleaning fresh insights, asking innovative questions, and finding new sources to better understand the significance and impact of the First World War.”

The Americans Who Opposed The Great War: Who They Were, What They Believed

Michael Kazin discusses the Americans who actively fought U.S. engagement in the First World War and continued to promote peace after the United States entered the war in 1917. According to Kazin, “until the Untied States entered the war, those activists organized the largest, most diverse, and most sophisticated peace coalition at that point in U.S. history.” The anti-war activists experienced retribution from the government through espionage and sedition acts with the knowledge that “as long as [conflicts] continued, resisting would yield them more hardships than victories.”

In his essay, Michael Helquist discusses the Espionage and Sedition acts enacted by Congress during World War One that led to the arrest of nearly one hundred dissidents in Oregon. Based on research conducted in the digital version of the Oregonian, Helquist compiled data on nearly two-hundred accounts of disloyal citizens – two-thirds of those reports were made by “neighbors, colleagues, casual observers, and local officials.”

World War I and the Northwest’s Working Class

According to Steven Beda, “America has never had a single working class,” and “this is especially true in the Pacific Northwest because the region’s major early-twentieth-century industries…tended to draw a racially and ethnically diverse group of workers.” In his essay, Beda discusses the relationship between those diverse groups, and how during World War I, skilled, White workers employed bargaining power to exclude workers of color.

Following World War I, African American camp worker Kathryn Johnson and YMCA volunteer Addie Hunton produced a memoir to document stories of Black soldiers during the war. Johnson and Hunton’s efforts mirrored those of other writers, historians, and civil rights activists “to generate a Black counter-memory of the war.”  Those histories, Lentz-Smith attests, “were not simply defenses of Black men and women’s honor; they were also calls to action.”

In Search of Citizenship: The Society of American Indians and the First World War

In her essay, Candice Bredbenner discusses American peace women and their anti-war campaign that “remains the most ambitious undertaking in the nation’s chronicles of women’s activism.” Having recently gained the right to vote, these women “finally possessed both political capital and organizational strength” to try and make World War I the last war in U.S. history.

Picturing the Past, Looking to the Future: The Forest History Society’s Repeat Photography Project

The Forest History Society began a project in 2011 to establish a collective database of repeat photography—a series of photographs taken at the same location at two or more different times. Sara Pezzoni, the project’s photo archivist, describes how various partners across the country, including “private landowners, conservation groups, national associations, government units, forest-reliant communities, and many others,” are working together to make this searchable database available to the public. 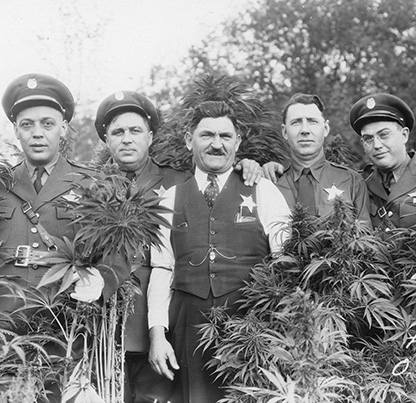 On September 17, 1931, the Oregonian reported that the Oregon State Police had arrested Paul Welter and Jose Flores for growing marijuana — also known as “Indian hemp” or “Mexican weed” — just west of Goble, Oregon. The plants were described as being “as tall as corn” and covered approximately 1.5 acres. Since no one on the police force had ever seen it growing, a sample plant was taken to a botanist in Portland...