The Lewis and Clark Centennial Exposition ­—held in Portland, Oregon, between June 1 and October 15, 1905 —garnered over one and a half million visits, paying tribute to the nation's westward expansion and new commercial and immigration ties to Asia. At the world's fair, visitors experienced a series of live-display concessions that included Native Americans, Filipino, and Japanese performers dressed in costume and participating in "sensational ceremonies." Emily Trafford explores those live displays and argues that they "were important cultural arenas for the perpetuation and rehearsal of racism." She explains: "Rather than providing an object and definitive lesson on a particular nation or populace, the concessions worked together to create a site at which white supremacy could be exercised in its various and changeable forms."

“To the World!!”: The Story Behind the Vitriol

Featuring a broadside recently acquired by the Oregon Historical Society, Stafford Hazelett documents an eight-month discussion — held primarily in the editorial pages of the Oregon Spectator on the controversial 1846 emigration by way of the Southern Route (Applegate Trail). The increasingly rancorous discussion migrated from the paper to private letters between Jesse Quinn Thornton and James Nesmith, both early emigrants to Oregon, and finally ended with a challenge to a duel. Although shots were never fired, “debates over the route have continued in published histories since 1847… about what actually happened and who or what was to blame.” Hazelett explains that this primary document “reminds us that returning to the past with fresh eyes is always a worthwhile endeavor.”

“We were nothing but rust”: Beatrice Green Marshall’s Wartime Experience

Beatrice Green Marshall arrived in Portland, Oregon, in 1942 to work in the Kaiser Shipyards. Prior to arriving in Oregon, Marshall trained at the National Youth Administration to become a skilled machinist. Instead of finding work in Portland for which she was trained, Marshall was assigned to unskilled, dirty labor in the hull of boats scraping rust. Marshall explained: “There were just certain jobs Negroes were not allowed to hold, and the machine shop was one of them.” In this Oregon Voices piece, Melissa Lang introduces Marshall’s story as one “full of frustration, disappointment, and confusion.” Her World War II experience “offers a better understanding of the complexities of experiences along stories of triumph.”

“Go into the yard as a worker, not as a woman”: Oregon Women During World War II, a Digital Exhibit on the Oregon History Project

“World War II blurred the distinction between women who had to work and women who wanted to work,” and over one hundred thousand joined the Oregon workforce in shipyards, chemical depots, as pilots, and even as spies. In this Exhibit Feature, Amy Platt highlights those stories featured in a digital exhibit, Oregon, WWII, Women, and Work, curated by the Oregon Historical Society (OHS) Research Library. The exhibit draws from over 200 records, including letters, photographs, and scrapbooks, documenting women's roles during the war. Each historical record is linked to scholarship published on The Oregon Encyclopedia. Readers can access the full digital exhibit online at the  Oregon History Project.

The Augmented Reality of Oregon History 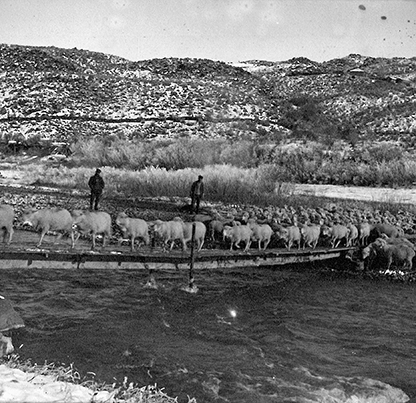 The southeast corner of Oregon is thought of by many as empty land. It is not. Watered by the Owyhee River and its tributaries, it is a land of cattle and sheep. Since the late nineteenth century, many immigrants, especially Basques, have settled in the area.