Oregon's Civil War: The Troubled Legacy of Emancipation in the Pacific Northwest

When working with the Oregon Historical Society to create the exhibit 2 Years, 1 Month: Lincoln's Legacy, project historian Stacey Smith sought to answer a number of questions about Oregon's place in the Civil War. Drawing on themes from the exhibit and new scholarship on the Civil War in the American West, Smith reveals the Pacific Northwest's critical role in shaping Reconstruction policy and challenges "the myth that Civil War Oregonians were disengaged from the national struggle over slavery and civil rights." Smith describes Oregon as a multiracial society led exclusively by white men, noting that Lincoln's Emancipation Proclamation forced the state's leaders to consider citizenship rights beyond just the black-white politics emphasized in most histories of the Civil War. Drawing the story into the 1870s, Smith shows how congressional representatives from Oregon played a prominent role in ensuring that African American enfranchisement did not extend to others, particularly Chinese-born immigrants.

The Oregon Historical Society's exhibit 2 Years, 1 Month: Lincoln's Legacy brings together rare documents and artifacts that utilize the allure of Abraham Lincoln while situating the national figure within a rich regional history. Museum Director Brian J. Carter explains that the exhibit creates "a space for exploration of stories surfaced by Lincoln's wake" and provides "an interpretive path that allows exhibit viewers to move from the evidence of history . . . through the monumental dilemmas of the era - war, slavery, families, and communities who coexisted with Lincoln." The exhibit essay includes images of OHS-owned artifacts and manuscript material displayed in the exhibit as well as contextual notes prepared by Amy Platt, Project Manager for the Oregon Encyclopedia and Oregon History Project,, all of which can also be accessed through the Civil War in Oregon page of the Oregon Encyclopedia ( www.oregonencyclopedia.org).

From the 1880s to 1920s, increasing development in Oregon defined the lives of both rural and urban residents. Jennifer Mower and Elaine Pedersen examined that history through close study of ninety-eight garments from historical institutions across the state and consultation with numerous historical records, contemporary publications from the time period, and secondary sources. They suggest that garments, while often overlooked by historians as a resource for information about personal and social history, reveal the ways in which women in Oregon adapted to their changing environments, including new consumer-driven behaviors, modes of transportation, and means of commerce. Clothing and textiles are valuable resources that, when used with written and visual historic documents, can shed new light on local and regional history.

In May 1919, the Typographical Journal printed reminiscences written by Emily Chenoweth McCown and Wilkie Duniway - both former printers for the Oregonian - after the death of the newspaper's publisher, Henry Pittock. This primary document is a rare first-hand account of skilled trade workers, including engravers, lithographers, and stereotypers, who worked with newspaper printers and pressmen during the 1880s and 1890s. Harry Stein explores the lives of those workers during a time of rapid change in the North American newspaper industry. Linotype machines and improved printing presses introduced mechanization and speed to printing processes and, as a result, altered labor practices and divisions within newspapers. Through Stein's introduction, the historical significance of the letters is revealed.

Thomas Vaughan was Executive Director of the Oregon Historical Society (OHS) for thirty-five years. He transformed OHS and left a lasting legacy in Oregon. At a memorial service held on March 13, 2014, in Portland, he was remembered by current OHS Executive Director Kerry Tymchuk, former OHS Associate Director Millard McClung, former OHS Director of Publications Bruce Hamilton, editorial cartoonist Jack Ohman, Senator Betsy Johnson, and Governor John Kitzhaber. This tribute is a record of the speeches given at that memorial.

History from Below: Connecting Rural Oregon to Its Social Movement History

In this local history spotlight, historian Sarah K. Loose describes the Rural Organizing Project (ROP) travelling workshop, "History from Below: Exploring Rural Oregon's Social Movement History," a project designed to engage citizens in their local history through primary document analysis. The workshops brought together politically diverse groups of community members in three locations around Oregon to discuss local history that is relevant to the present. Historians and scholars introduced community members to historical social movements, and they guided small groups through archival document review. Through those primary documents, residents found connections to challenges they face today. 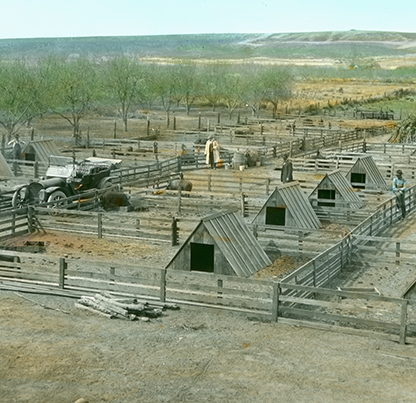 For decades schools have used visual images in their classes. Such visuals have included videos, films, slides, and in the early twentieth century, lantern slides. Lantern slides were large, generally 3 1/2 inches by 4 inches, and were originally printed on glass. Later slides were made of film sandwiched between glass sheets. Nearly all lantern slides were black-and-white photos, but they were often hand-colored, as