“He took up arms against the loins from which he sprang and the womb that bore him”: Gender and Parricide during the American Agrarian Crisis—A Case Study

In the fall of 1895, eighteen-year-old Loyd Montgomery murdered his parents, as well as a visiting local businessman, at their farm near Brownsville, Oregon. Roughly two months later, Loyd met his own demise at the end of a hangman’s noose behind the Linn County Jail in Albany. Historian Peter Boag situates this tragedy in the depression of the 1890s, showing that the economic turmoil of the time challenged rural families and communities and undermined the highly gendered systems of authority on which these twin pillars of society had been based. Gender was central to the way people understood and documented the parricide. As they struggled to make sense of it, people near to and far from the event either attempted to reinforce the rural gender system that the murders had undermined, or invoked newer models of gender emanating from urban-industrial America.

Historian Johanna Ogden explores the often overlooked but critical role of Punjabi laborers of Oregon in forming the radical Indian nationalist Ghadar Party in 1913. She addresses the international, national, and local forces behind the Punjabis’ migration to the state and the particular conditions they encountered once there. Framed by a series of post-9/11 concerns about the targeting of Arabs, Muslims, and South Asians, this article explores not only historical and social constructions of “us” and “them,” citizen and non-citizen, but the experience of Punjabi migrant laborers in remote Astoria, Oregon, where hardened racial and national lines were seemingly loosened.

“the kind of person who makes this America Strong:” Monroe Sweetland and Japanese Americans

Oregon-born Monroe Sweetland (1910-2006), who grew up in conservative Constantine, Michigan, became a prominent civil rights activist, first with the socialist League for Industrial Democracy in the early 1930s, and then as the founder of the Oregon Commonwealth Federation when he moved to Oregon in 1936. Over the course of his long life, Sweetland worked with African American, Filipino, Chinese, Japanese, and Mexican American communities in seeking redress against discriminatory policies. His association with Japanese Americans, historian William Robbins explains, began in the 1930s and continued throughout his long and productive life. Frank Hachiya, a young Japanese American with the Army’s Military Intelligence Service—whom Sweetland met in the Pacific during the Second World War—provides the narrative thread to this story. Hachiya, who died on Leyte Island, became a living presence in Sweetland’s moral and ethical comportment for the remainder of his life.

Reflections of my Father: the Architecture and Legacy of Pietro Belluschi

The Oregon legacy of the renowned architect, Pietro Belluschi, is evident in the many buildings he designed around the state and now in the exhibit his son, Anthony Belluschi, curated for the Oregon History Museum (running May 17 to September 9, 2012). The younger Belluschi provides an intimate look at his father’s work and architectural philosophy in his description of the exhibit’s organization and unique elements, including a “room within a room” featuring a woven wood ceiling—one of many innovations Belluschi brought to the architectural style known as Pacific Northwest Regionalism.

The town of Maxville was once a logging town in Wallowa County, Oregon. Many African American families came from the South and Midwest to work in the Bowman-Hicks logging industry in Maxville in the 1920s. When the logging operation collapsed in the 1930s, the town was dismantled and the town disappeared. In 2008, Gwendolyn Trice—the daughter of an African American Maxville logger, Lucky Trice—founded the Maxville Heritage Interpretive Center (MHIC) in Wallowa, Oregon, to recover the history of the logging community in Maxville. Today the MHIC is highly active in community life. The center hosts the Annual Maxville Gathering, maintains partnerships with regional universities, is developing a musical play about Maxville with Marv Ross, and continues to invigorate the tourism industry in Wallowa County. 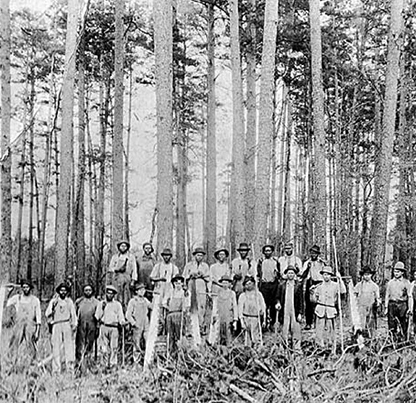 In 1923, a Missouri lumber company built a town in northeastern Oregon named Maxville. Hundreds of loggers left Arkansas and Mississippi to live and work there. Many brought their families, and many were African Americans. While the town has long since disappeared, the Maxville story is still unfolding. The Logger’s Daughter follows Gwen Trice, an African-American woman who was born and raised in Eastern Oregon,...