Laurie Mercier documents influential women in Oregon’s labor movement between 1945 and 1970 and how their work at the state level intersected with national movements. According to Mercier, “union leaderships’ fixed belief in labor hierarchy reflected the stubborn ideology of the white male breadwinner,” and unions in the Pacific Northwest “emphasized physical strength and masculine solidarity in their defense of sex-segregated work.” As a result, little has been written about working-class women’s grassroot efforts following World War II to employ multi-pronged strategies for workplace reforms. In this research article, Mercier sheds light on some of those women and how their efforts helped shape a growing feminist movement that “accelerated the rate of change in working women’s lives.”

In this research article, Stuart Barker documents the development of the Oregon Skyline Trail from a scenic highway to an eventual hiking trail as a “glimpse into Americans’ recreational demands during the 1920s and 1930s,” and a case study in outdoor recreational planning during the early twentieth century. In 1920, Frederick W. Cleator of the U.S. Forest Service organized the Skyline Party to explore a potential route for a scenic highway from Mount Hood to Crater Lake. Prompted by the bourgeoning auto-tourism industry and a push to preempt the National Park Service from claiming a similar rout of its own, Cleator and promoters championed this road as a way to “open the scenic wonders of the Cascades.” The scenic roadway ultimately went unbuilt and the eventual hiking trail became part of the Pacific Crest Trail, demonstrating changing attitudes toward nature tourism in the United States.

“Out of order”: Pasting Together the Slavery Debate in the Oregon Constitution

Amy E. Platt’s and Laura Cray’s recent research on the Oregon State Constitution for Oregon Historical Society (OHS) exhibits and digital collections prompted this reflection essay to commemorate OHS’ 160th anniversary and the opening of its new permanent exhibit, Experience Oregon. Platt guides readers through Oregon’s slavery debate by examining accounts of the Constitutional Convention proceedings and select readings from the final document and draft copies held at OHS. Cray describes how those draft pages were digitized and how they reveal the physical work of cutting and pasting changes that were required to produce this guiding document. Platt describes those changes as “remnants of issues that newly arrived mid nineteenth-century Oregonians had been wringing their hands over since the 1840s: who could live and work in Oregon; who could own property; would Oregon be a slave state; and how was the government going to control it all?” That process of changing a word and pasting a sentence “helped create one of the most racially exclusionary states in the country.”

Building the Oregon Coast Highway: An Oral History of the 1931–1932 Work Camp at the Cape Creek Bridge, Lane County, Oregon

In this Oregon Places article, the history of the Cape Creek Bridge construction in Lane County, Oregon, is told through oral history interviews of Charles W. Manning, a concrete crew foreman at the work site, and his son, Clyde E. Manning, also one of the authors. Scenes from the bridge construction are also documented in this heavily-illustrated article, many of them from Charles Manning’s own collection. The authors take readers through a narrative about the work on site, the construction work camp living conditions, and work camp community. Charles Manning passed away in 2016, but this account of the Cape Creek Bridge, according to Rick Minor, reveal the “important contributions to history of the Oregon Coast Highway.” 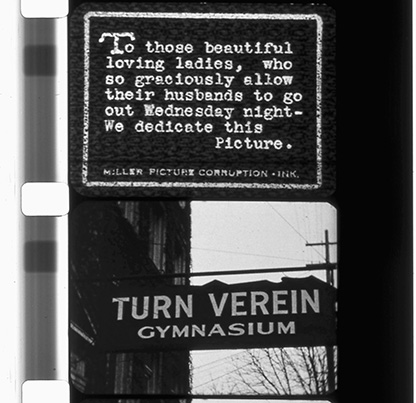 Grunts and Groans, a 1933 silent film, was made by Herbert Miller, a member of the Portland, Oregon, chapter of the Amateur Cinema League (ACL). The film shows a day in the life of the Turn Verein Gymnasium, which was located at 1139 Southwest 13th Avenue in downtown Portland.