In this research article, Martin White documents Black students' attempt to implement a Black Studies program at Reed College in Portland, Oregon — a struggle that ultimately "failed to take root." In 1968, Black students at the college, many of whom had been actively recruited through a scholarship program, formed a Black Student Union (BSU) that advocated for expanding Reed's curriculum beyond its Eurocentric focus. During the next two years, Black students demanded, and ultimately established, a Black Studies Center on campus; however, lack of funding and institutional commitment undermined the program. In 2018, "the echoes of past conflicts are again being heard on the Reed campus," as students are renewing that debate. As White points out, "racial justice remains a central issue in American life," and "Reed College will decide the role it will play."

After seventy-five years of tenuous financial security, insufficient facilities, and dwindling enrollment, in 1942, Albany College trustees took "a leap of faith into an uncertain future." In what Jean Ward describes as a "kairotic moment," the trustees purchased a new campus and renamed the school Lewis & Clark College. Ward documents the early history of Albany College through its transformation on the Fir Acres campus in Portland's southwest hills, when it was described by journalists as "Oregon's Cinderella College." In 2018, Lewis & Clark College celebrates its 150th anniversary and seventy-fifth year on the Fir Acres campus. This "story of survival and renewal" is a fitting tribute to that anniversary, and it would not have been possible without the help of "loyal trustees, alumni, and other friends of the school."

William Lovell Finley spent his career advocating for the protection of birds and wildlife and was a leading figure in the early-twentieth-century conservation movement. While Finley was prominent during that time, his work has fallen into obscurity due to the scattered nature of his archival materials.  In this heavily illustrated Research Files essay, Laura Cray — digital services librarian at the Oregon Historical Society — documents Finley's career and the year-long digitization to make available online nearly all of his archival materials held at the Oregon Historical Society and Oregon State University. Included in the project are nearly 7,000 images and over 8,000 pages of manuscript materials that are available at digitalcollections.ohs.org and oregondigital.org/sets/finley-bohlman.

In this Reflection Essay, Diane Simmons describes the research she conducted for her book, The Courtship of Eva Eldridge, a biographical narrative of a young woman during World War II. Eldridge worked at a cafeteria in the Kaiser Swan Island shipyard beginning in 1944. During her research, Simmons looked at runs of Kaiser's company newsletter, The Bo's'n's Whistle, to give her insight into Eldrige's experience. Through that research, Simmons found that women first faced a cold reception, but by 1944 when Eldridge arrived, the company's efforts to make the environment more appealing to women was evident. After being integrated into the workforce, many women then encountered propaganda urging them back into the domestic sphere.

History by Headline: Browsing the Newspaper Repository of the Marshfield Sun Printing Museum

The Marshfield Sun Printing museum, located in Coos Bay, Oregon, has a newly-established repository of over 30,000 print copies of significant daily newspapers, including the Coos Bay Times, Coast Mail, Marshfield Sun,and Empire Builder. According to Lionel Youst, the museum's curator, "thousands upon thousands of headlines in the Marshfield Sun Printing Museum's collection reveal only a hint of the history embedded within the columns, but one of the delights in perusing those pages is the headlines." Youst describes the history of newspaper headlines and how the editors of the Coos Bay Times implemented headline changes during its hundred-year run. 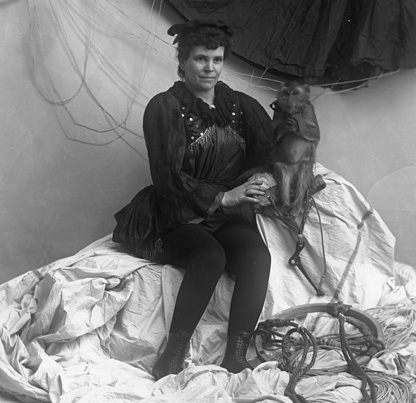 In the latter part of the nineteenth century, Miss Hazel Keyes, along with her pet monkey Jennie Yan Yan, would don parachutes and jump out of hot air balloons to the delight of many. The daring aeronauts performed up and down the West Coast, including at a “free exhibition” on Mount Tabor in Portland, Oregon, in September 1893. That performance was followed a month later by a one-mile ascent above Salem, Oregon, to...