Although Oregon adopted its first anti-abortion law in 1854, Portland's first prosecution of a "criminal operation" (abortion) did not occur for nearly twenty years. The Oregonian coverage of abortion trials from 1870 to 1920 reveals many obstacles prosecutors faced during that time, including lack of sufficient evidence and ambiguities in the state's anti- abortion law. Through case studies and data collected from Oregonian articles during that time period, Michael Helquist explores Portland's early abortion trials that highlight "the nuanced and disparate reactions of physicians who found themselves on the front lines of abortion services, policies, and enforcement." Helquist argues that "an understanding of the conflicts over reproductive policy [is] as important to women's and the nation's history as the struggle to achieve woman suffrage and other rights of citizenship."

"The Job was Big, but the Man Doing it was Bigger": The Forgotten Role of Thomas B. Watters in Klamath Termination, 1953­-1958

Matthew Villeneuve argues that "much of the history of Klamath termination can be understood as a story that hinged on whose voices were the loudest, whose voices decision makers believed spoke on behalf of others, and whose voices were silenced entirely." In 1955, Thomas B. Watters became a Management Specialist charged with overseeing the Tribes' separation from the federal government and, as such, his voice was disproportionately loud. Rather than use his position to silence Klamath concerns, however, he joined calls to Congress to revise the terms of the Tribes' separation. Studying Watters's role "offers compelling support for the understanding of termination as a program not of emancipation but of abandonment."

A Foreigner's View of Oregon: The Portland Photography of E.O. Hoppé

Emil Otto Hoppé , a London-based photographer, travelled to Oregon in 1926 while photographing the United States for his book Romantic America. Jennifer Strayer provides readers a context for the six photographs of Oregon reproduced in the book, which was published as part of a travel series marketed to tourists from multiple countries. She also argues that examining the Oregon photos "adds to the growing picture of Hoppé and his work" and that "the choices he made as a photographer helped create a story of place that was as much a construct as an objective depiction" of Oregon and the United States.

Western Landscape Photography: Then and Now

Rachel McLean Sailor explores the history of photography and its role in place-making in the West, while engaging examples of contemporary photography that "can respond anew to a singular moment, and a singular place, while simultaneously encompassing the deep history of its subject matter . . . medium, and the cultural history of all who have attempted such representations in the past." Readers are guided through a number of photographs from the past as well as contemporary examples from the Oregon Historical Society's exhibit, Place: Framing the Oregon Landscape. This exhibit essay touches "on the many ways that the artists in this exhibit are responding not only to place, but also to the histories of landscape . . . and how photographic styles and conceptual approaches have rapidly transformed in America from the 1840s to today."

From 1882 to 1885, P.I.B P¡ng was stationed in Oregon as a special agent for the General Land Office, a predecessor to the Bureau of Land Management. While his specific duties are unclear, P¡ng traveled around the state and documented his experiences in over thirty letters that were published in the Girard Press, his hometown newspaper in Kansas. In this Oregon Voices piece, Lynn Summers, P¡ng's great grandson, presents excerpts from approximately 68,000 words written by P¡ng on the Pacific Northwest. Readers will experience a fascinating outsider's perspective on Oregon during the period, including P¡ng's descriptions of modes of transportation, the arrival of the transcontinental railroad, and what he considered strange farming practices.

How Do You Celebrate a County's Centennial?

In this Local History Spotlight, Jarold Ramsey highlights the Jefferson County centennial, a celebration that took place in the summer of 2014. Rather than planning a one-stop festival at a central location, the ad hoc commemoration committee devised a four-skit mobile "Centennial Road Show" that stopped at local festivals throughout the summer. The skits were performed by a local theater troupe called the Centennial Players and included scenes from historic events in the county. Ramsey writes, "the Road Show, itself, contributed something to [the] process of historical self-identification. . . . . and we are glad to recommend the project to any other county pondering what to do about celebrating its own centennial."

Allen V. Pinkham and Steven R. Evans, Lewis and Clark Among the Nez Perce: Strangers in the Land of the Nimiipuu, reviewed by Doug Erickson

Will Bagley, South Pass: Gateway to a Continent, reviewed by Laura Woodworth-Ney

Patricia Junker, Modernism in the Pacific Northwest: The Mythic and the Mystical, reviewed by Bonnie Laing-Malcolmson

Diana L. Di Stefano,Encounters in Avalanche Country: A History of Survival in the Mountain West, 1820-1920, reviewed by Jeff Crane 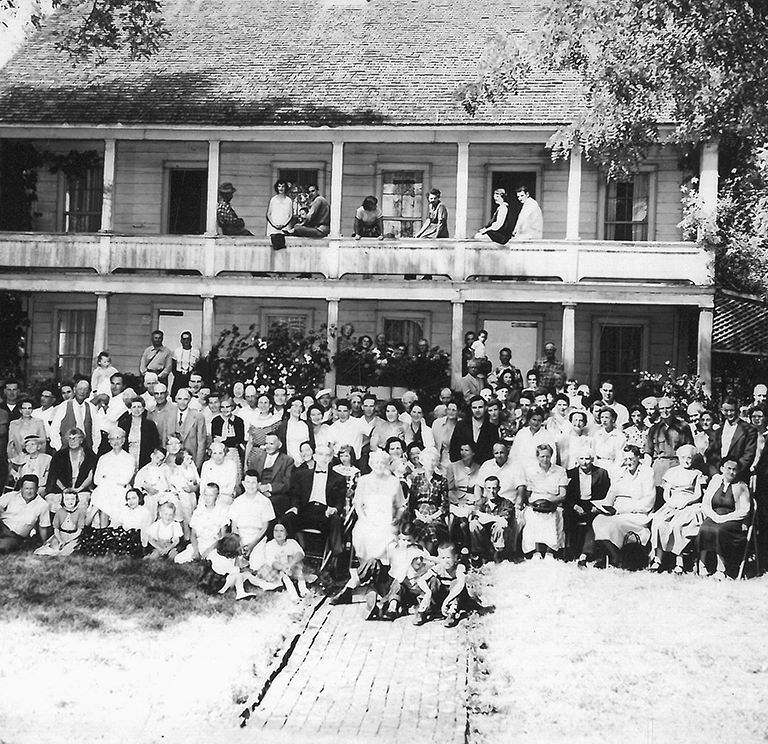 The Applegate brothers, Charles, Jesse, and Lindsay, came to Oregon with their families in the Great Migration of 1843. After brief stops at Fort Vancouver and near Salem, they settled near Dallas for a few years. In about 1850, all three brothers moved to a small community in northern Douglas County, which Jesse named Yoncalla. According to Oregon Geographic Names, the name came from a Native American phrase meaning