“The Road that Won an Empire”: Commemoration, Commercialization, and the Promise of Auto Tourism at the “Top o’ Blue Mountains”

On July 3, 1923, over 30,000 people — including President Warren G. Harding and First Lady Florence Harding — gathered in Meacham, Oregon, for a two-day celebration orchestrated by Walter E. Meacham, president of the Old Oregon Trail Association (OOTA). The purpose of the events was twofold: commemorating the eightieth anniversary of the first immigrant train to the Pacific Northwest and dedicating the Old Oregon Trail Highway. Over 5,000 cars arrived with the first day’s onlookers who travelled on a roadway that had once served wagon trains into the West. The first couple was symbolically adopted by the Cayuse, who presented the first lady with a blanket designed for the ceremony by the Pendleton Woolen Mills. Historian Chelsea Vaughn argues that the celebration combined commemoration with commercialization, signifying a shift in trends around historical memory of the settlement period. She further notes the importance of Native participation and outspokenness within what was essentially a celebration of their colonization.

In June 1870, Nose Sakae travelled from his native Japan on a merchant ship bound for San Francisco, California, one of many young Japanese who explored the world during the late nineteenth century. Nose was recruited that same year by Sidney Marsh, Pacific University’s first president, to study at the university in Oregon. After returning to Japan, he and several other students introduced Western ideas to the nation’s emerging education system. Although Nose enthusiastically accepted the liberal arts education he received at Pacific University, after returning to Japan, he eventually “established nationalistic and conservative values that caused him to develop prejudiced views toward American approaches to education, especially regarding Christianity and women’s education.” Literary scholar Yasutaka Maruki argues that Nose’s dramatic shifts in beliefs and perspective are reflective of the dynamic transformation Japan underwent during the Meiji Era.

Young women of the 1960s and 1970s countercultural revolution era were not only active in a wide range of social justice movements but also began organizing and advocating for women. A number of women during that time emerged as lesbians, finding a place for themselves in the back-to-the-land movement, another emerging subculture. Separating themselves from mainstream society, Jean Mountaingrove and Bethroot Gwynn created safe spaces for women to interact. Historian Heather Burmeister argues that the women’s experiences on their own lands and creation of published material helped create regional, national, and even global networks through which women could re-create themselves and construct and express their new identities through art, spirituality, and other forms of creative culture. Burmeister’s introduction is followed by edited selections from oral histories she conducted with Mountaingrove and Gwynn.

Oregon was an early adopter of prohibition laws, banning alcohol four years before the 1920 Constitutional amendment. When prohibition ended in 1933, Oregon legislators passed the Liquor Control Act and the Oregon Liquor Control Commission (OLCC) to retain control over alcohol consumption, which generated much-needed revenue for the state. Despite state control over alcohol, bootleggers made sizeable profits and OLCC agents, such as Warren Niete, were tasked with stopping bootleg alcohol consumption with very few resources available. Niete’s captivating recollection provides insight on OLCC law enforcement agents’ challenges as they worked to regulate the sale and consumption of alcohol during the 1950s.

Thompson’s Mills, Oregon’s oldest water-powered grist mill, is located just east of Shedd in Linn County on the Calapooia River. The mill operated commercially for 146 years, and its owners adapted the mills to evolve with changing regional and national events. Milling began on the site in 1858, and through a dam system, the Calapooia River generated power for the mills until 1986. The Thompson’s Mills State Park is a unique resource for Oregon historians, containing artifacts that document the state’s technological, political, and social past. Journalist and park staff person Kristine Deacon traces the mills’ complete history, drawing out the significance of the historical record in the buildings and collections and narrating the personal, political, and economic impacts on the story with particular attention to the importance of water rights.

Dr. Eckard V. Toy, Jr., grew up in the Pacific Northwest and earned his Ph.D. in American history at the University of Oregon. Beginning with his 1959 Master’s thesis, “The Ku Klux Klan in Oregon: Its Charter and Program,” the Klan and related topics were a primary focus of his research and writing. After teaching at several universities in the Midwest and on the Pacific Coast, he retired to the Hood River Valley. He is remembered in this tribute by friends and colleagues. 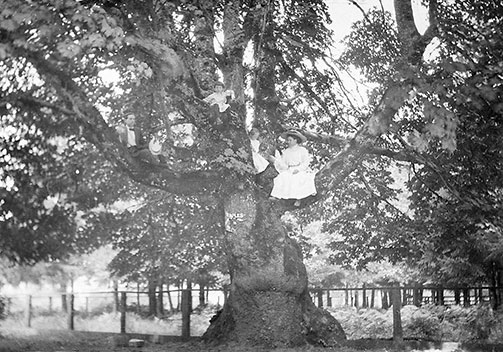 Though people have lived in the lower Willamette Valley for millennia, few identified sites remain from the times before the arrival of newcomers in the late eighteenth and early nineteenth centuries. One such place is The Pow Wow Tree, a big leaf maple tree (Acer macrophyllum) that grows near the Clackamas River. Near this tree, the Clackamas and Multnomah tribes would meet with other people to conduct business and...