“Providence will take care of me…I  will wear a crown”: Frontier Circuit Rider, James O. Rayner, and the Land Laws  of Early Oregon

James O.  Rayner served as an itinerant minister for the Methodist Episcopal Church (MEC)  in the Oregon Territory from 1848 to 1859, where he worked circuits from  Astoria to Jacksonville to reach a quickly expanding population of white  residents. Through primary documents, including Rayner’s unpublished papers,  James V. Walker examines the personal struggles of a mid nineteenth-century  circuit rider and how they reveal “not only the idealized goals of missionary work  but also the realities of fron­tier life and the forces that promoted America’s  settler colonial expansion in the Pacific Northwest.” Rayner’s diary and family  letters provide readers a “narrow view” into how one minister “understood the  contempo­raneous historical events and forces that affected his life in  Oregon,” including the 1850 Oregon Donation Land Act, inception of the Cayuse  War, forced removal of Indians from the Umpqua Valley, and the Rogue Indian War  in Southern Oregon.

Author Craig Owen Jones  writes “the failure of American Cricket to flourish in the late nineteenth and  early twentieth centuries is the Rorschach inkblot test for sports historians —  each sees in the failure whatever they wish to see.” In this research article,  explores the history of cricket in Oregon, and especially the Portland Cricket  Club, “with an emphasis on cricket clubs’ sociological and demographic makeup.”  The earliest reference of cricket in Oregon are in newspaper reports on cricket  games being played in Portland in 1873. By the late 1870s, cricket had expanded  beyond Portland to areas as far apart as Albany, Astoria, and Corvallis. Jones  ultimately concludes that cricket’s failure to establish in Oregon was due to  major cricket clubs taking on an exclusionary membership of mainly upper-class  players, and failed to establish a broader appeal. Although cricket never took  off in Oregon, Jones emphasizes that “it nonetheless played a persistent, if  small, role in sporting life for almost three quarters of a century.”

An Oral History of the All American Toy Company: An Oregon Original

by Martha A. Solomon

In this Oregon Voices  article, Martha A. Solomon documents the history of the All American Toy  Company, founded in 1947 in Salem, Oregon, which has captivated generations of  children and adults. During its peak years, the company sold a wide range of  toy trucks, all modeled after full-scale vehicles used in various industries in  Oregon, to major retailers across the country. Solomon writes that “even  decades later, former All American Toy Company truck owners can recall when  they and their friends received the toys as gifts.” That sentiment is reflected  in excerpts of oral history interviews with former employees who each shared  “recollections and personal history of [their] time with the All American Toy  Company, many memories dating back to 1947.” An exhibit about the All American  Toy Company will be on view at the Oregon Historical Society between September  13, 2019, and January 26, 2020. 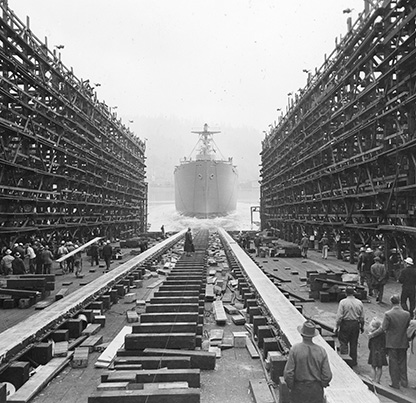 Liberty Ships, a type of cargo ship built between 1941 and 1945, were critical to maintaining supply lines during World War II. The Thomas Condon, pictured here during its June 17, 1943, launch, was named after a noted Oregon geology professor and educator. The Thomas Condon was one of many ships built by the Oregon Shipbuilding Company, one of Kaiser’s largest shipyards in the Northwest.