Master of His Medium: E.B. Aldrich, the East Oregonian, and the First  Global Conflict in Pendleton

E.B.  Aldrich, editor of the East Oregonian newspaper  for forty-two years, shaped Pendleton’s response to World War I through his  editorial guidance. Brigit Farley documents Aldrich’s role as “chief recruiter,  cheerleader, and enforcer for the cause” of war in the small town. Through the  newspaper, Aldridge demanded everyone do their part for the war effort by  featuring spotlights on local champions (including women), and publicly calling  out “slackers” who dodged the draft, those who overindulged on rationed sugar  in their coffee, and withheld support for the war effort. Following the  November 1918 armistice, Aldrich advocated peacekeeping efforts and championed  President Woodrow Wilson’s peace proposals. Aldrich’s presentation of World War  I and beyond, Farley argues, “yields some interesting insights into the conflict’s impact beyond the major urban centers.”

Housing Segregation and Resistance: An Introduction

On Sunday, April 8, 2018, local researchers  gathered for a roundtable discussion at the Oregon Historical Society to  present research they had uncovered about housing segregation and resistance in  Portland, Oregon. Carmen P. Thompson moderated that discussion and presented to  attendees an introduction to housing segregation. In this record of her  presentation, Thompson documents how housing segregation in Portland, Oregon,  stems from policies and practices rooted in the enslavement of people of  African descent. These policies, she attests, “instituted a national racial  hierarchy of white supremacy and Black inferiority.” Thompson also reflects on  each of the presenters’ research and draws connections to “institutional  racism, Black resistance, and private citizens’ silence,” during this  commemoration the fiftieth anniversary of the 1968 Fair Housing Act.

Greta Smith, one of three  presenters at a public history roundtable at the Oregon Historical Society commemorating  the fiftieth anniversary of the 1968 Fair Housing Act, describes her research  on restrictive covenants used as early tools in Portland, Oregon, to segregate  neighborhoods. In this record of her talk, Smith describes how restrictive  covenants written into property title deeds were designed to protect “neighborhoods  from the encroachment of  economically undesirable features,” such as types and locations of buildings on  a property and, in the early twentieth century, the kinds of people who could  inhabit a property. Enforcement of these covenants “took the work of private  citizens with state support,” citing quality of life concerns to maintain  homogenous neighborhoods through “redlining.” Smith concludes by discussing how  covenants and redlining may have protected white and wealthier homeowners’  property values, but they affected generations of African Americans through  disinvestment and exclusion.

“A place under the sun”: African American Resistance to Housing Exclusion

Melissa Lang was one of three  panelists at a public history roundtable at the Oregon Historical Society commemorating  the fiftieth anniversary of the 1968 Fair Housing Act. In this record of her  presentation, Lang documents African American resistance to housing exclusion  by highlighting stories of those Portlanders who “fought back and uplifted their community from within.”  Three ways that resistance manifested included Black realtors and investors who  helped circumnavigate the system of exclusionary practices and redlining;  Black-owned banks and credit unions that provided loans for property upkeep;  and Black activist organizations beginning in the 1940s that advocated for  better housing policies. Lang argues that by “capitalizing on their  industriousness,” these resisters “developed a network of realtors and  investment opportunities when they were otherwise excluded, and they founded  and utilized community organizations to keep the work of the city and the state  in check.”

Small Steps on the Long Journey to Equality: A Timeline of Post-Legislation  Civil Rights Struggles in Portland

Leanne Serbulo presented a  timeline of civil rights struggles in Portland, Oregon, at a public history  roundtable at the Oregon Historical Society commemorating the fiftieth  anniversary of the 1968 Fair Housing Act. In this record of her presentation, Serbulo  documents milestones in dismantling racial discrimination between 1949 and 1990.  For this timeline, Serbulo researched Metropolitan  Human Relations Commission (MHRC) records held at the Portland City Archives  and traces how the commission navigated the process of improving race relations  in the city and Multnomah County. As Serbulo argues, “civil rights legislation was simply the first step in a  long and unfinished journey toward equality.” As the timeline shows, dismantling  racial discrimination occurred primarily in public agencies during that time  period, as “MHRC and other civil rights organizations had little influence over  the myriad of diffuse transactions in the housing market, and the public  agencies that were empowered to regulate those markets were reluctant to  aggressively police the private housing industry.”

This Local History Spotlight documents Portland State University students’ research on how  barriers to homeownership in communities of color have influenced the  concentration of wealth and inequality in Portland, Oregon. The students conducted research by using crowdsourcing efforts to obtain property deed  information, and partnered with other university students and local  organizations to disseminate their initial findings. The authors concluded that “by documenting racially restrictive covenants, we revealed the many ways that people of color have been denied access to property in Portland, how they navigated restrictions to  purchasing homes, and the ongoing legacies of housing inequality in our community.”

The Friends in “Friends of MacDonald”

In 2018, the Friends of  MacDonald (FOM) celebrated its thirtieth anniversary as a committee of the Clatsop  County Historical Society in Astoria, Oregon. The group celebrates the life of  Ranald MacDonald, a descendant of Chinook Chief Comcomly, an officer for the  Hudson’s Bay Company, and the first English teacher in Japan following a time  period when the country had been closed to foreigners. In this Local History  Spotlight, Jim Mockford, who served as the chair of the group for ten years,  recounts the efforts to form FOM to honor MacDonald’s story through activities fostering friendship, mutual  understanding, and cultural and educational exchange between Americans and  Japanese. MacDonald’s history is one that has reached national attention, and  as Mockford describes, “the story of the Oregon-born adventurer who travelled  the world now brings people from around the world to travel in his footsteps.”

G.  Thomas “Tom” Edwards grew up in Taft, Oregon, and earned his Ph.D. in history  from the University of Oregon. He had a long, distinguished career at Whitman  College, where he taught for thirty-four years. There, Edwards earned a  reputation as a notable scholar of Pacific Northwest history and lifelong  mentor to his students. In this tribute, he is remembered as a “brilliant, yet  humble” teacher and colleague for whom “history was more than just his  profession. It was his life.” The many stories recounted here celebrate  Edwards’s life and the lasting mark he made on the history of the Pacific  Northwest. 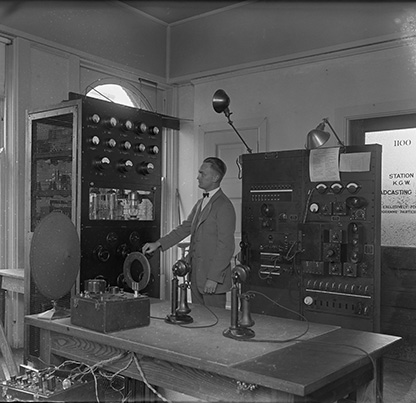 In 1922, the U.S. Department of Commerce granted the Oregon Publishing Company, publisher of the Oregonian newspaper, the ninety-eighth radio license in the country. On March 22 that year, the station began broadcasting for the first time with the call letters KGW — the first station in Portland used for commercial purposes. Located in the Oregonian Building Tower at 537 SW Sixth Avenue in downtown Portland, KGW was...