“The Nomadic Race to Which I Belong”: Squatter Democracy and the Claiming of Oregon

In Oregon Country during the 1840s, when the United States and Great Brittan were competing for control of the region, “squatters — that is, settlers who lacked title to the lands they claimed — had come to occupy a prominent, polarizing position in the nation’s political culture.” Preemption laws passed during that period “not only legalized squatting but also facilitated the practice, contributing to an era of massive territorial conquests spearheaded squatters and enabled by Jacksonian Democrats.” This Squatter Democracy, John Suval argues, not only “conditioned the claiming of Oregon Country,” but also served as “lightning rods at the center of political strife” over slavery in the years leading up to the Civil War.

“I wanted Oregon to have something”: Governor Victor G. Atiyeh and Oregon-Japan Relations

Victor G. Atiyeh served as Republican governor of Oregon from 1979 to 1987, during which time he expanded Oregon and Japan’s international trade relationship. Christopher Foss documents some of Atiyeh’s efforts to “make personal connections and use political power to generate new exports,” in Oregon’s post-World War II economy. A struggling economy prompted Atiyeh to seek new opportunities to sell more goods beyond agricultural and timber to Japan and increase Japanese investment in state. “While hardly the economic savior contemporary accounts make him out to be,” Foss argues that Aityeh should be given credit for “recognizing that Oregon needed to diversify its economic portfolio, even if such diversification yielded variable benefits.”

Merchant and Imperial Diplomat: The Extraordinary Career of Portland’s Moy Back Hin

Building on previous historical research, Chuimei Ho and Bennet Bronson document the career of Moy Back Hin, an honorary Chinese consul and successful merchant in Portland, Oregon. Using Chinese-language texts and collections at the Oregon Historical Society — including Moy Back Hin’s official garments of the Qing Dynasty — Ho and Bronson further document Moy’s diplomatic connections to the Chinese imperial government. “From obscurity as a young servant,” the authors attest, “to fame as a businessman, leader and diplomat, Moy…lived an extraordinary life among Chinese Americans.”

In this Oregon Voices article, G. Thomas Edwards documents Abigail Scott Duniway’s often overlooked Correspondence column in The New Northwest. Edwards argues that while “Duniway’s historical prominence is primarily due to her political advocacy, especially for woman suffrage and temperance,” her correspondence column was written with the goal of “social reform through the immediate improvement of the lives of regional women, especially through what she saw as their need to develop a sense of self-worth.” Using digitized archives of her newspaper through University of Oregon’s Historic Oregon Newspapers website, Edwards presents the column as “a window onto the complexity — and at times contradictions — in Duniway.”

by Russ Karow and Gloria Lutz

In this Local History Spotlight, Russ Karow and Gloria Lutz document a collaborative project to gather historical information about the crops produced in Yamhill County, Oregon. They compiled data from historical agricultural and farm records at Oregon State University and the Oregon Historical Society that resulted in a set of spreadsheets documenting the earliest pioneer-introduced crops through 2012. The spreadsheets were then circulated among community members to fill in the historical gaps based on family records and oral histories. Their documentation also included “first plants” used by Native Americans in the region based on research by Native scholars. 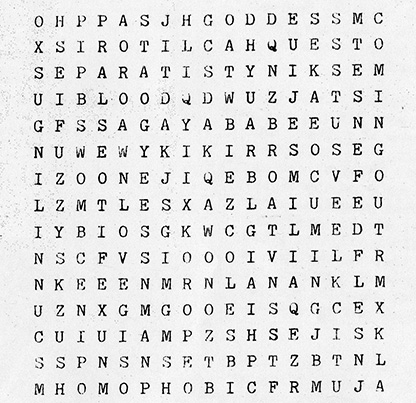 “Find the words below which are closeted in the puzzle. They are trapped vertically, horizontally diagonally, backwards and forwards. Circle them so they can come out and be blatant!” This sentence accompanied the pictured word search in the May 1981 issue of Matrix Magazine. There are fifty-one words total, including: separatist, self-defense, tickle, quest, monogamous, parthenogenesis, fuzzy, gay, play, femme,...