"This is where we want to stay": Tejanos and Latino Community Building in Washington County

During the mid 1960s, Latino families seeking better working conditions and financial prospects began settling in Washington County, Oregon. Many early Tejano (Texas ethnic Mexicans) families abandoned seasonal migrant work to settle permanently in the area and established a strong network of community support systems that helped new arrivals seek healthcare, combat discrimination, and retain cultural identity. Luke Sprunger documents those early community-building efforts through excerpted interviews with five narrators who moved to Washington County during the 1960s. "Their stories give voice to various phases of community growth, activism, and intra-ethnic relations that developed among county Latinos," and "their efforts and initiatives have aided newly arriving Latinos to Washington County and encouraged respect for and among the county's Latino residents."

Grace Russell Fountain and Mabel Russell Lowther were among a handful of women artists in the Pacific Northwest who moved into the professional sphere at the turn of the twentieth century, and whose work contributed to the promotion and protection of Crater Lake. Fountain and Russell both sought opportunities with Southern Pacific Railroad, which promoted tourist destinations along their new rail corridors with landscape art of the American West. "During their lifetimes, the artwork of Grace Russell Fountain and Mable Russell Lowther made their names almost synonymous with Crater Lake." Their artistry "shaped public perceptions of Crater Lake and played an important visual role in promoting [its] scenic beauty…and designation as a national park."

In this Oregon Voices essay, Sandra Hickson Carter shares excerpts from a collection of letters written by her father Robert Hickson, Jr., to his family during World War II. He served in the Army Signal Corps behind the lines of combat for nearly four years. "Hickson's letters reflect ordinary concerns and hopes of a time and place shared by thousands of enlistees and 41st Division draftees assigned to the Army Support Services and Technical Corps." The details and subjects of his letters varied due to strict censorship screening, but readers gain a better understanding of the "daily conditions of many Oregon service company soldiers who spent their whole Army career behind the battle lines, making the machine of war run."

Shared Narratives: The Story of the 1942 Attack on Fort Stevens

During the evening of June 21, 1942, a Japanese submarine opened fire on Battery Russell at Fort Stevens, the Army's southern-most defense at the mouth of the Columbia River. Rather than playing into the hysteria the Japanese hoped to generate among the American population, U.S. Government an media organizations cooperated on voluntary domestic media censorship effort to "present a narrative that minimized danger, encouraged diligence, and enforced perceptions of calm among the coastal population that further minimized the threat." Newspaper editors chose to focus on narratives that prioritized diligence rather than panic, and reports on the attack accentuated the positive. "Fort Stevens' story involves questions of narrative rather than outright restriction of information," and "the dominant reaction to the attack…was that of dismissal."

Gary L. Kopperud began training under his father at age ten to become a clock maker, which led to a lifelong involvement in the trade. In 1997 he started an informal trade school at the Eastern Oregon Correctional Institution (EOCI), transporting his own tools and equipment to teach inmates clock-making skills. Since it began, the trade school has trained fifty-one men, many of whom have entered the clock-making trade. According to Kopperud, "none of them have re-offended or returned to prison." In 2014, EOCI inmates worked with Kopperud to restore the clock tower at the Morrow County Courthouse, a project that received a 2015 Oregon Heritage Excellence Award from the Oregon Parks and Recreation Department. 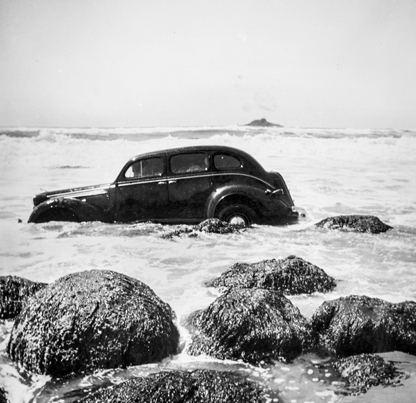 On February 13, 1913, Governor Oswald West signed a law that officially made Oregon’s beaches a public highway. For decades people had been driving their wagons and buggies along the shore. Until Highway 101 was built, the only roads connecting coastal towns were on the north coast, between Astoria and Tillamook, and the south coast, from Coos Bay south to California. Along the central coast no such roads existed....