In 1963, Heacock created this replica of a stamp mill from the early 1700s, when gears were typically made of wood. Miners use stamp mills to crush rock. Heacock used a Diderot Pictorial Encyclopedia as the design inspiration for the mill. This operational replica took Heacock 100 hours to make.

Heacock carved this figure in 1954 based on a painting called The Red Boy by Sir Thomas Lawrence.

Mosaic of plastic inlaid in a walnut plug. The mosaic is of Mount St. Helens. Carved in 1938.

Heacock carved this figure of an ice skater in 1957 from several different types of wood and then painted it. The figure’s skates are made of copper.

Heacock carved this clock, called “the Hunter,” from a picture of a famous clock in Germany taken in 1830. Carved in 1934.

Heacock created this black walnut radio cabinet in 1942 while working at the St. Helens Pulp and Paper Mill. It took 850 hours of his spare time to make this piece. On his catalog card he wrote, “The bottom part represents things pertaining to the sea. The cabinet part pertaining to the land, and the top to the air.”

Detail of the doors of the radio cabinet.

Heacock carved this from an illustration called A Glob’s Life by Walt Kelly, which appeared in LIFE Magazine in 1952. Heacock often used popular culture as inspiration for his work. He carved this piece from many different woods, including myrtlewood, dogwood, black walnut, madrone, and sugar pine, and it took ninety hours to complete. 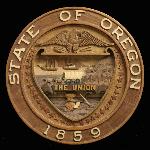 Heacock carved this Oregon state seal in 1953 from a variety of woods, including sugar pine, walnut, holly, myrtlewood, satinwood, and lignum vitae.

Although Heacock began etching on ivory when he was in Alaska, he later used some of the same techniques on plastic. This plastic etching is double-sided, like many of his works, and features a picture of Lake Oswego after sunrise. Carved in 1953.

Heacock often used both sides of his materials, as with this two-sided etching on a piece of fossilized mastodon tusk. Heacock carved this cribbage board from a large walrus tusk that he found, which had been left too long in the sun, making it particularly hard.

Etching on a piece of fossilized mastodon tusk, 1934. The image is the steamer White Horse in five-finger rapids on the Yukon River, Yukon Territory, Canada.

Heacock etched this scene of the wood mill in St. Helens, Oregon, in 1964. Etching and carving on whale teeth and bones is known as scrimshaw, an art form started by sailors on whaling ships in the late eighteenth and early-nineteenth-centuries. At the time, the whaling industry discarded whale teeth, so sailors had plenty of material with which to practice their carving.

This miniature replica of the stamp mill at the Treadwell gold mine in Alaska is made of ivory. Heacock and his father worked as repair technicians at the Treadwell mine from 1915 to 1917. This model is on the scale of one-half inch to the foot. It is made of hundreds of pieces, all joined together with ivory pins. Heacock carved this replica while working at the mine in 1915. It took eight months of his spare time to make.

This elaborately carved key cabinet has an inlaid wood design of Multnomah Falls on the exterior and an etched design of Wahkeena Falls inside. The large carving commemorates the time Heacock spent as a sixteen year old in the Klondike in 1898. Carved in 1961.

Hallie Heacock and his father in an Alaskan mining town, 1910.

Hallie Heacock with some of his carvings. 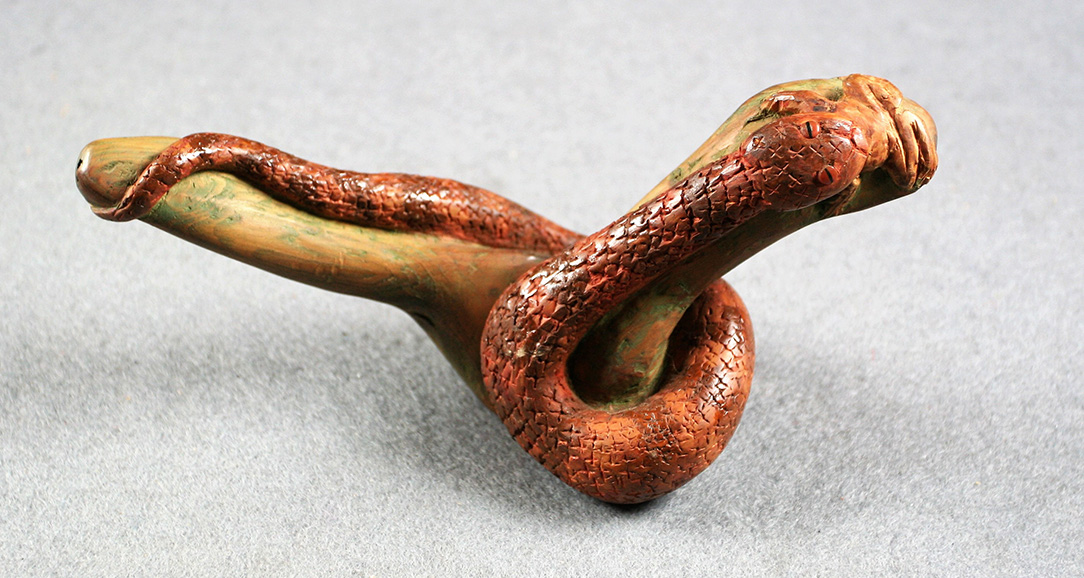 Hallie Heacock and the St. Helens Pulp and Paper Mill