Home Museum Exhibits “A Symbol of Home”: The Environmental and Political Legacy of Tom McCall in Oregon

From the Moving Images Collection

In 1967, the Oregon Beach Bill (HB1601) was being debated in both the state legislature and the media. The bill ensured public access to all Oregon beaches, regardless of private property lines. One of the main stumbling blocks for passage was the disagreement over how much of the beach should be protected from development. Gov. McCall depended on the advice of experts to come up with a precise measurement to determine the line between private and public property. The measurement—sixteen feet above sea level—was based on the desire to leave wet sand free of private structures or infringement. For the final bill, the measurement was made contingent on other landscape features, such as dunes and vegetation lines.

These news clips from KOIN news follow the story throughout May 1967. KOIN's political commentator, Bob Bruce, was a voice of skepticism against McCall's beach plan. He begins with an editorial on the misplaced priorities of the governor and legislature.

In August 1970, the American Legion held its national convention in Portland. A federally chartered organization formed after World War I, the Legion serves as an advocate for veterans, most notably through the GI Bill and the Veterans Administration. It also, in part, advocates a political ideology known as Americanism—notably outing Communists to HUAC during the Cold War. Such positions made the American Legion a target of anti-war protestors during the Vietnam War, many of whom believed that the Legion was too supportive of President Nixon's foreign policy.

When the American Legion announced that Nixon would be speaking at the Portland convention, anti-war groups came together in what was called the People's Army Jamboree. The group called for a massive protest, and organizers informed City Hall that tens of thousands of young people soon would be pouring into the city. Mayor Terry Schrunk, certain that the National Guard would be needed to control the situation, worked with Gov. Tom McCall's office to plan for the protest and held public meetings to discuss where to accommodate all the protestors who would need camping and gathering spaces.

An anti-war group called The Family spoke at the meetings and met with city officials to ask for access to Washington Park in southwest Portland as a gathering place. There was much resistance by city leaders, and McCall's office worked with The Family to come up with a plan to attract the protestors out of the city to Milo McIver Park to attend a free Woodstock-like rock concert funded by the state and private businesses. Vortex I: A Biodegradable Festival of Life was Oregon's way to keep Portland calm during a politically tense time.

Nixon canceled his appearance at the convention, which took some pressure off the city, but business owners still boarded up windows and residents sent letters to the mayor and governor condemning their accommodation of the protestors. The Jamboree still marched through the city, with amused Legionnaires from all fifty-four chapters looking on, and then caravanned to the Vortex festival and concert. The Legion held its own parade through Portland, invited McCall to speak (as a member of the Oregon chapter), and welcomed Vice President Spiro Agnew to the stage in Nixon's place. To the governor, the week was a complete success.

The events were heavily covered by the news media, and the Oregon Historical Society holds video footage shot by KOIN. The film begins with scenes of Portland prepared for the American Legion convention. The audio fades out whenever a reporter speaks over the footage (the reporters' voices are not included), but most of the film contains audio.

The second clip begins with scenes from the anti-war parade organized in part by the People's Army Jamboree. A reporter interviews Legionnaires watching the parade for their reactions. The American Legion parade follows. 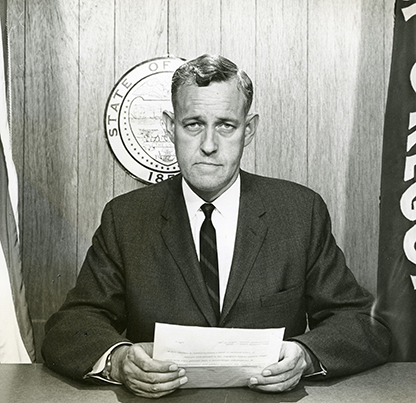 Tom McCall, more than any leader of his era, shaped the identity of modern Oregon. As governor from 1967 to 1975, McCall, a Republican, pioneered a doctrine of balancing economic growth with environmental protections and took the lead in establishing safeguards for the state’s beaches, rivers, and farmlands by curbing pollution and suburban sprawl. His leadership, defined by bold actions and lyrical speeches, helped...

END_OF_DOCUMENT_TOKEN_TO_BE_REPLACED

Planning for a Productive Paradise: Tom McCall and the Conservationist Tale of Oregon Land-Use Policy

Governor Thomas Lawson McCall is remembered by many as a larger-than-life figure who made a mark on the Oregon landscape with his strong land-use planning legislation. Laura Jane Gifford explores that legacy from a new angle through an argument that McCall's vision was tied "to the Republican Party politics of the Progressive Era…. emphasiz[ing] wise use and careful planning to generate progress in place of mere...

A multi-disciplinary, service-learning curriculum focused on Governor Tom McCall’s legacy to Oregon citizens. By learning about Tom McCall, students gain knowledge, skills and commitment to act boldly and responsibly in civic matters. The curriculum is designed to involve young people in decisions and actions that will create “a better Oregon”.