He lectures frequently on historical and current events and can be seen and heard on national and international television and radio. His writings have been translated into Spanish, French, German, Russian, Chinese, Japanese, Korean, and Ukrainian. For the past four years he has been writing a history of the United States in haiku form and publishing it on Twitter. He guesses he will be at it for two more years.

In October 2016, Brands will release his newest work, The General vs. the President: MacArthur and Truman on the Brink of Nuclear War, a riveting story of how President Harry Truman and General Douglas MacArthur squared off to decide America's future in the aftermath of World War II. At the height of the Korean War, President Harry S. Truman committed a gaffe that sent shock waves around the world. When asked by a reporter about the possible use of atomic weapons in response to China's entry into the war, Truman replied testily, “The military commander in the field will have charge of the use of the weapons, as he always has.” This suggested that General Douglas MacArthur, the willful, fearless, and highly decorated commander of the American and U.N. forces, had his finger on the nuclear trigger. A correction quickly followed, but the damage was done; two visions for America's path forward were clearly in opposition, and one man would have to make way. 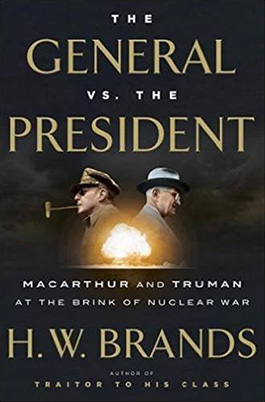 For nearly 20 years, the Oregon Historical Society has presented the Mark O. Hatfield Distinguished Historians Forum, bringing together the nation’s top scholars and award-winning authors for thought-provoking evenings of history.