The Americans who opposed World War I built the largest, most diverse, and most sophisticated peace coalition up to that point in U.S. history. They came from a variety of backgrounds: wealthy and middle and working class, urban and rural, white and black, Christian and Jewish and atheist. They mounted street demonstrations and popular exhibitions, attracted prominent leaders from the labor and suffrage movements, ran peace candidates for local and federal office, and founded new organizations that endured beyond the cause. For almost three years, they helped prevent Congress from authorizing a massive increase in the size of the U.S. army—a step advocated by ex-president Theodore Roosevelt. Then many persevered, in the face of a concerted campaign by the government to silence them. Several anti-war activists founded the organization that became the ACLU to defend those whom the state prosecuted for refusing to change their minds. Soon after the end of the Great War, most Americans believed it had not been worth fighting. And when its bitter legacy led to the next world war, the warnings of these peace activists turned into a tragic prophecy—and the beginning of a surveillance state that still endures today.

Michael Kazin is a professor of history at Georgetown University and editor of Dissent magazine. He is the author of six books about politics and social movements in the United States, including The Populist Persuasion: An American History, A Godly Hero: The Life of William Jennings Bryan, and American Dreamers: How the Left Changed a Nation, and is editor of The Princeton Encyclopedia of American Political History. He is a regular contributor to Foreign Affairs, The New York Times, Politico, The Nation, and other periodicals and websites.

Oregon aggressively embraced the WWI-era Espionage and Sedition Acts with investigations, charges, and prosecutions of at least 100 citizens. Using an analysis of digital newspaper archives, Helquist documents for the first time the individuals who were charged, their alleged offenses, and the outcome of their prosecutions. He will present these findings in a context of similar actions by other western states, and he will consider how this wartime experience reflects Oregon’s sense of exceptionalism.

Michael Helquist is a public historian, journalist, and activist who has worked extensively in the anti-war, economic and social justice, and LGBTQ movements. He has published in several periodicals. He received the 2016 Joel Palmer Award for the best article published in the Oregon Historical Quarterly. Helquist is the author of Marie Equi, Radical Politics and Outlaw Passions, published by OSU Press in 2015.

www.michaelhelquist.com for full list of Oregonians charged with sedition (1916 – 1919) 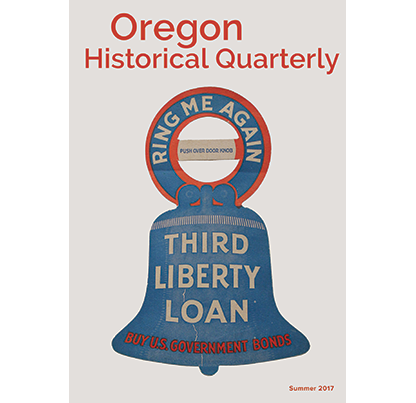 Authors explore topics including the earliest map of the Northwest Coast, visible female citizenship during the First World War, and the Forest History Society’s Repeat Photography project. The issue also includes a special section with reflections on the centennial anniversary of World War One.