Oregon hasn’t played a critical role in the presidential nomination process for many years, but that’s not how it’s always been. There was a time when candidates flooded the state to garner support from voters — a time when Oregon mattered. Here in 1930, members of the election board are seated at a table as people vote at precinct no. 42 in Portland, at the YMCA at Southwest Sixth and Taylor Streets. OHS Research Library, bb012687

Given that I have had a lifelong fascination with presidential campaigns and politics, perhaps it is not surprising that I have occasionally been a little bit jealous of the residents of Iowa and New Hampshire — the states that have kicked off the presidential caucus and primary season for the past many decades. It seems as though voters in those states just need to walk outside their house to have the opportunity to personally meet with each and every presidential candidate. That certainly wasn’t the case in Oregon this year and hasn’t been that way for a long, long time. By the time our May primary occurs in presidential election years, the nominees of each party have all but been decided, and all that we see of the candidates is a brief stop in Portland for a fundraiser and perhaps a rally.

There were times, however, when Oregon played a critical role in the presidential nomination process — times when Oregon mattered. Oregon held its first presidential primary on April 19, 1912, and for six decades was only one of a handful of states to hold direct primaries requiring delegates to select the candidate who won the state’s popular vote. The vast majority of delegates to national convention were chosen by party bosses in their respective states. Political reforms in the 1970s led to more states moving to the presidential primary system. The modern presidential primary system has tended to quickly winnow the field of candidates, often leaving just one candidate as the presumptive nominee by the time Oregon's May primary is held.

This past Tuesday — Oregon’s Primary Election Day — I was pleased to deliver a presentation via Zoom to the generous sponsors of our Mark O. Hatfield Lecture Series, which, of course, is one of the countless events cancelled or postponed due to the COVID-19 pandemic. My presentation focused on three Oregon presidential primaries that received wide national attention and brought candidates to Oregon for extensive campaign swings across the state. I’d like to share that history with readers as well as a slideshow of candidates' photographs from the OHS Research Library's collections. 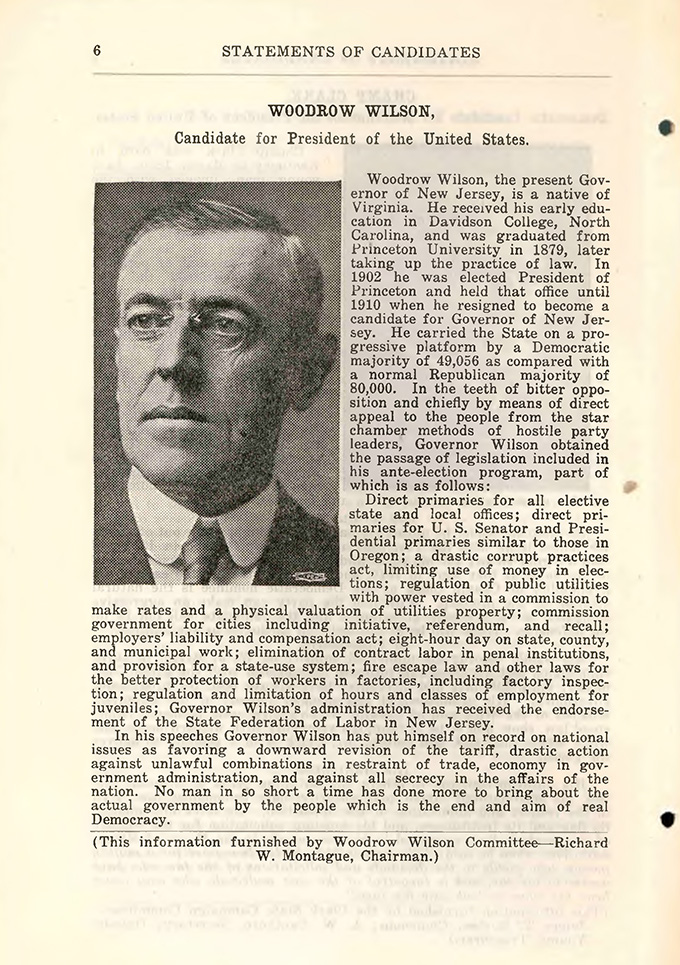 In 1910, Oregon became the first state to use a primary to select delegates for its national conventions, and on April 19, 1912, it held its first presidential primary. This page from Oregon’s 1912 Democratic pamphlet documents Woodrow Wilson’s candidate statement. State Library of Oregon, Digital Collections

New York Gov. Tom Dewey and former Minnesota Gov. Harold Stassen engaged in an epic battle that was the last important contest before the Republican National Convention. Pundits declared that the winner of the Oregon primary would be the Republican (GOP) nominee to take on President Harry Truman in the fall. 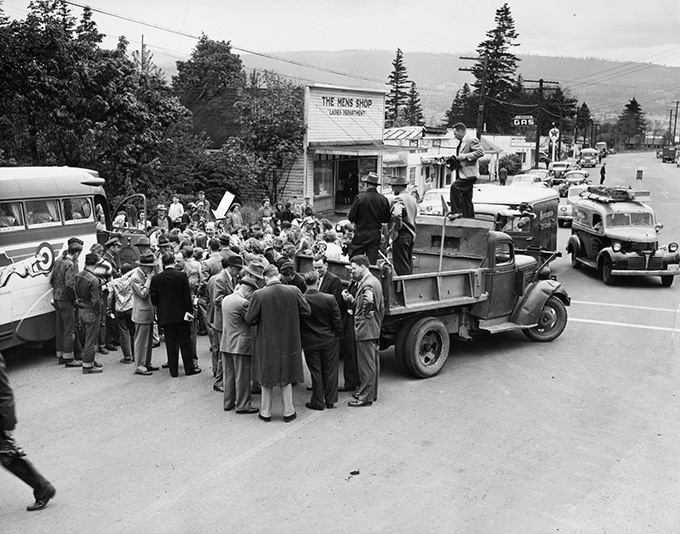 Both candidates had similar positions on many issues, but there was one issue where they stood in stark opposition. As the words “Iron Curtain” and “Cold War” entered the national vocabulary, Stassen supported a proposal to outlaw the Communist Party, and Dewey opposed it. The issue ended up as the sole subject of a Dewey-Stassen radio debate from the Portland studios of KEX that was broadcast by some 900 stations across the country to an audience estimated to be over 50 million Americans.

One of my favorite photographs from our collection is one of Dewey shedding his stuffy image by walking with a delegation of half-naked cavemen during a visit to Grants Pass.

An experienced courtroom prosecutor, Dewey dominated the debate, and I find these words of his to be especially eloquent:

I am unalterably, wholeheartedly, and unswervingly against any scheme to write laws outlawing people because of their religion, political, social or economic ideas. I am against it because it is a violation of the Constitution of the United States and of the Bill of Rights and clearly so. I am against it because it is immoral and nothing but totalitarianism itself. Stripped to its naked essentials, this is nothing but the method of Hitler and Stalin. It is thought control, borrowed from the Japanese war leadership. It is an attempt to beat down ideas with a club. It is a surrender of everything we believe in.

This campaign was a harbinger of the battle between conservatives and moderates that would dominate the Republican party for decades.

The conservative Goldwater was the early frontrunner, but New York Gov. Rockefeller, who was the personification of the liberal eastern establishment, did all he could to stop the bandwagon of the Arizona senator. 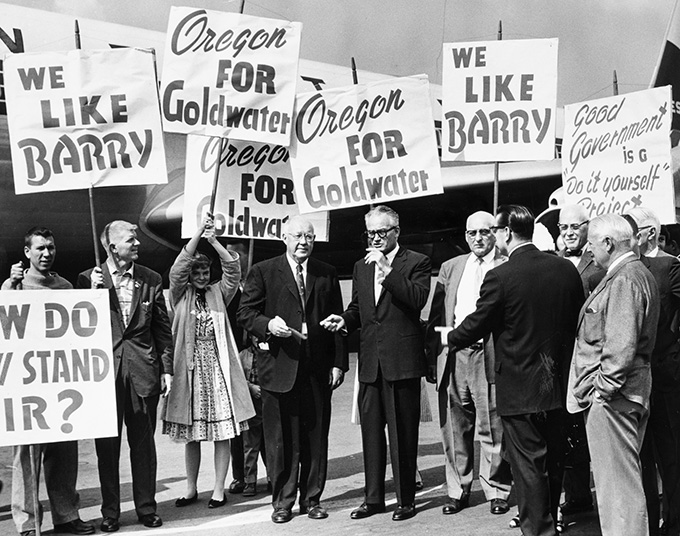 Rockefeller made half a dozen trips to Oregon in April and May, and ran under the motto of “He Cared Enough To Come,” referring to the fact that Goldwater only made a few quick visits to Oregon. Rockefeller won the Oregon primary, but Goldwater would narrowly defeat him in the all-important California primary the next week. Goldwater would go on to win the nomination and then lose in a November landslide to President Lyndon Johnson. 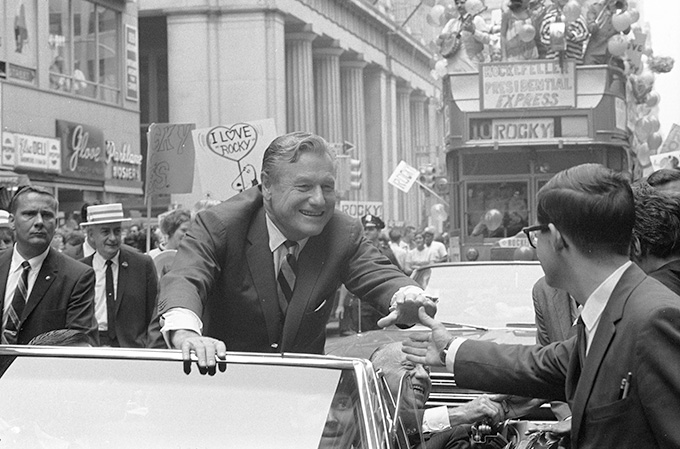 Nelson Rockefeller made several trips to Oregon during the 1964 primary campaign. He is pictured here in 1968 in New York. Library of Congress, 07963u

One of the most turbulent presidential election years in American history was held in 1968. Eugene McCarthy from Minnesota, a strong opponent of the Vietnam War, ran shockingly close to President Lyndon Johnson in the first-in-the nation New Hampshire Primary, and weeks later Johnson would shock the nation by announcing that he would not seek or accept re-nomination. 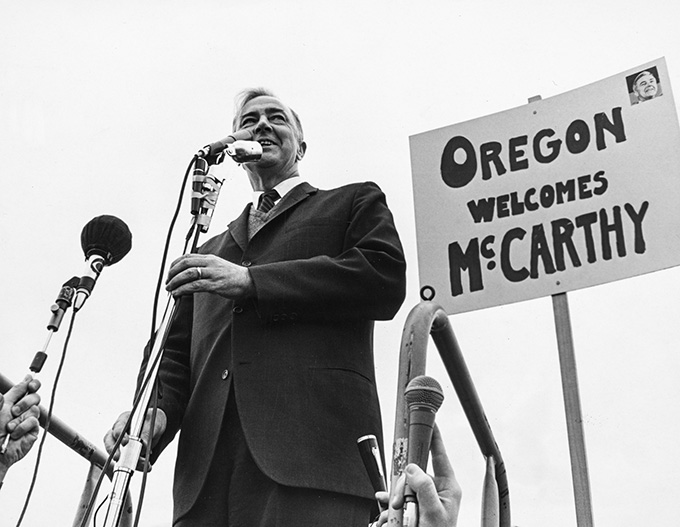 New York Sen. Robert F. Kennedy would then throw his hat in the ring and win the Nebraska and Indiana primaries — the first two he entered. (Imagine a candidate today not entering the race until AFTER the New Hampshire Primary!). The Kennedy brothers — John, Teddy, and Robert — had won 27 consecutive elections in their political careers — a streak that would end in Oregon with a 44 percent to 38 percent McCarthy victory.

Many figures who would play an influential role in politics for decades — including former State Sen. Blaine Whipple and former Speaker of the Oregon House and Portland Mayor Vera Katz — cut their political teeth campaigning for either McCarthy or Kennedy in the 1968 primary.

Tragically, one week after the Oregon primary, Kennedy would be assassinated in Los Angeles, shortly after delivering a victory speech after his narrow victory over McCarthy in the California primary.

New York Sen. Robert F. Kennedy won the Nebraska and Indiana Democratic presidential primaries but was defeated by Sen. Eugene McCarthy in Oregon in 1968. He is pictured here in June 1968 with Oregon Rep. Edith Green after his primary defeat. OHS Research Library, 0091P101

One of the most iconic political photos taken in Oregon was one of Kennedy on the beach near Astoria. The Massachusetts native gazed at the Pacific Ocean and said: “I can’t believe this is so much like home.” Soon after, he kicked off his shoes and socks, rolled up his dress pants, and ran out toward the ocean, with Freckles, his cocker spaniel, at his side.  One can’t help but look at the photograph and reflect on what might have been. 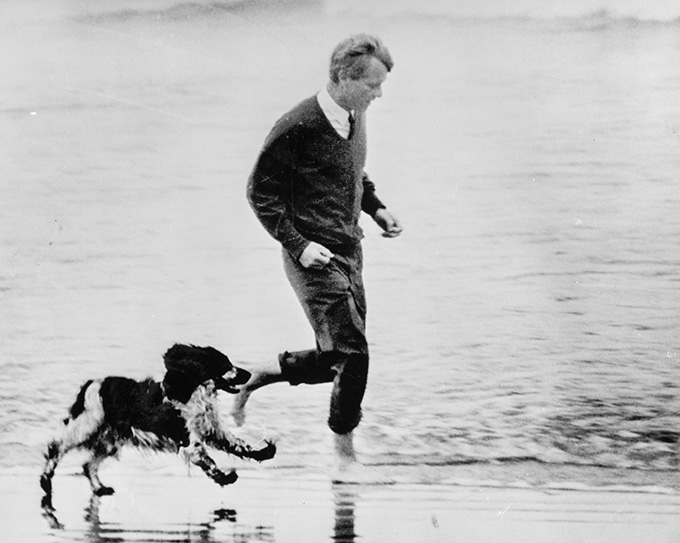 Robert F. Kennedy runs on a beach in Astoria with his dog in May 1968 during the Oregon presidential primary. OHS Research Library, 0340B030

The debacle in this year’s Iowa Democratic primary and growing opposition in allowing Iowa and New Hampshire — two states that do not reflect America’s ethnic diversity — to play such an influential role in winnowing the field may lead to reforms in the 2024 presidential nominating calendar. Many have suggested a system or rotating regional primaries. Who knows? There may be a time when Oregon will matter once again.

On a personal note, from the time I was 8 to 14 years old, my hobby was collecting autographs from prominent politicians. I’ve added a few images from my collection in the slideshow below that just happen to include the four candidates in the 1968 and 1972 epic Oregon primaries — Robert Kennedy, Gene McCarthy, Nelson Rockefeller, and Barry Goldwater. And while it doesn’t include either Tom Dewey or Harold Stassen, the very first addition to my collection was the autograph of the man who would defeat Dewey in November — President Harry Truman.

Thomas Dewey and his wife, Frances Dewey, stand on the platform of the campaign train in Eugene, Oregon, on September 9, 1948. OHS Research Library,0024P457

Thomas Dewey inspects a logging operation at Long-Bell Lumber Company on the Umpqua River near Scottsburg, Oregon, on May 9, 1948. OHS Research Library, 0024P462

Robert Kennedy campaigns down the Willamette Valley from the rear platform of the “Beaver State Special,” on May 20, 1968. OHS Research Library, 0358P023

Note and autograph from Harry Truman. Courtesy of Kerry Tymchuk