Home Blog Treasures from the Oregon Vault: When is a Melodeon not a Melodeon?

This rosewood melodeon dating to the mid-1800s was once owned by John and Lilla Leach. OHS Museum, 80-181.249. Photograph by Robert Warren.

The Oregon Historical Society (OHS) is dedicated to making Oregon’s long, rich history visible and accessible to all. For more than a century, OHS has served as the state’s collective memory, gathering and preserving a vast collection of objects, photographs, films, manuscripts, books, and oral histories. Those collections, cared for by museum and library staff, are held in a 100,000 square foot facility sometimes referred to as the Oregon Vault.

In this series, “Treasures from the Oregon Vault,” museum staff highlight their favorites from the over 75,000 objects they safeguard, including clothing and textiles, Native American belongings, artworks, and everyday items. Some are powerful, some are ordinary, and some are totally bizarre.

The OHS museum collection contains a surprising number of melodeons. A melodeon is a type of reed organ; an American development on the harmonium (also a type of reed organ). The main difference between a melodeon and a harmonium is that the harmonium produces sound with air pressure, whereas the melodeon uses suction to draw the air through metal reeds. (The word is also used to describe a type of accordion, but we are not going to get into that here!) With the invention of the “improved melodeon,” the mechanism patented by Jeremiah Carhart on December 28, 1846, the instrument became very popular in the mid-1800s. Melodeons look like small, square grand pianos with a rectangular box atop four legs. One of the most interesting ones in the OHS collection is no longer a melodeon at all. 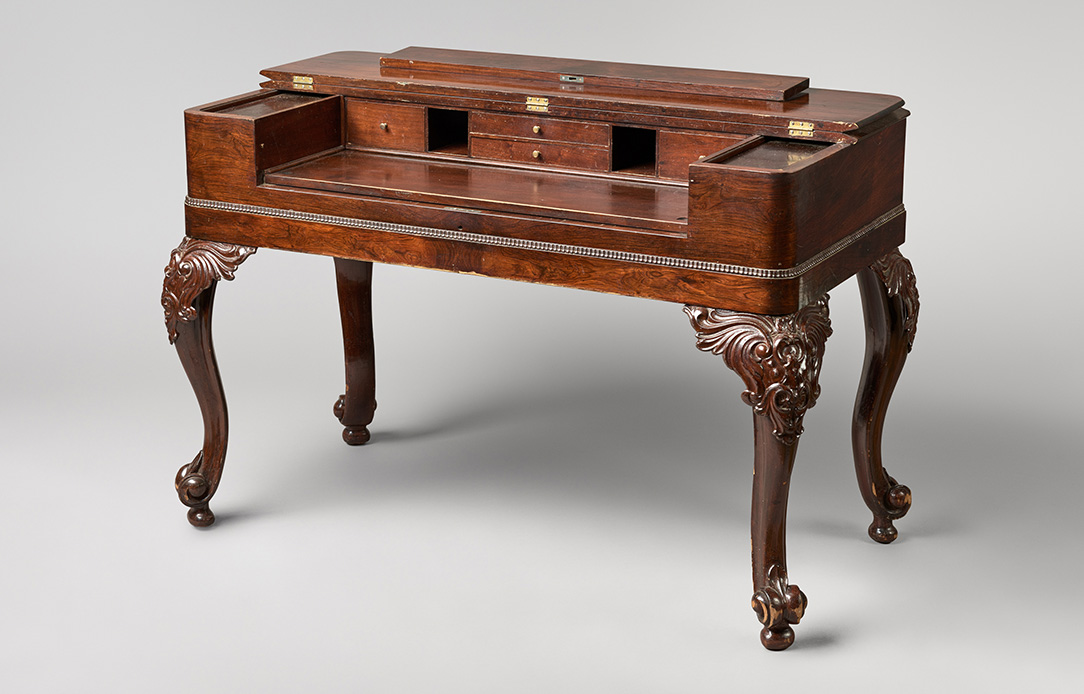 The object that was once a melodeon was converted to a desk. OHS Museum, 80-181.249. Photograph by Robert Warren.

Made of rosewood, with curved legs and elaborately decorated metal caps at the top of the legs, at first glance it looks very similar to other melodeons of the period. This one, however, has two distinguishing features. When the instrument’s cover is lifted there are no keys, as its owners converted it into a desk. A flat wooden surface replaced the space where the keys would have been and folds out into a larger desk. Drawers and compartments have been inserted behind the desk surface and on the sides. Also, there is a hand-engraved brass plaque on the underside of the melodeon that reads:

This desk made from rosewood Melodeon that came around the Horn [Cape Horn] to Governor George Abernathy [sic] at Oregon City. Allie Werner nee Bowers worked in the home and bought it for $25.00. And resold it to W.W. Irvin about 1890. Should be kept in Irvin family. 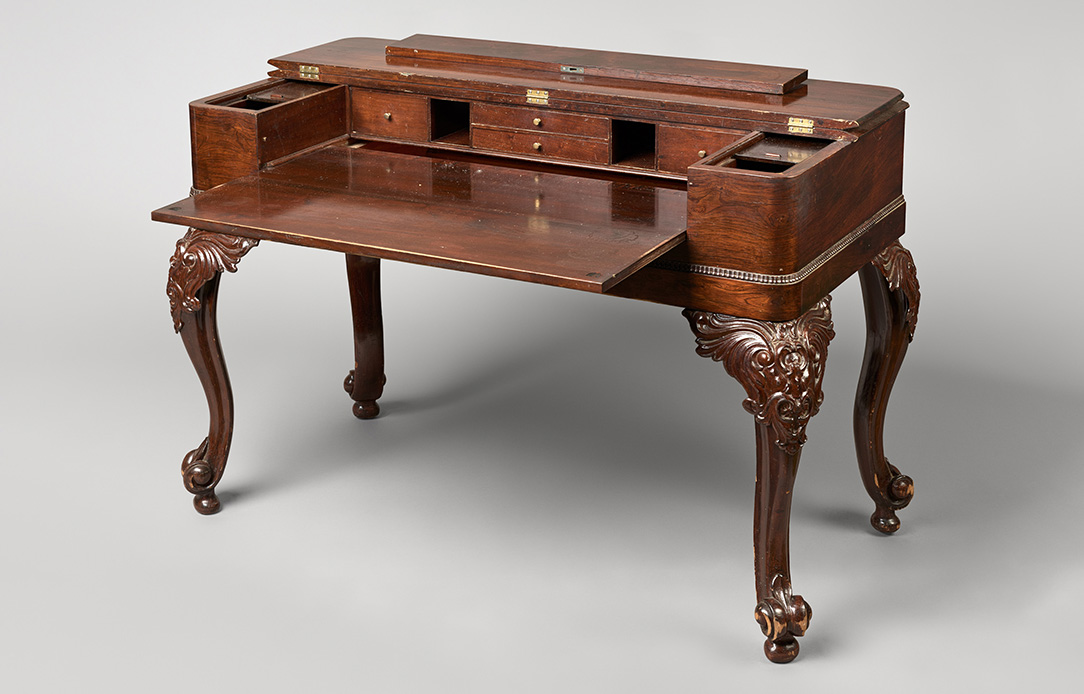 The folding wooden panel, where melodian keys were once located, creates the desk surface. OHS Museum, 80-181.249. Photograph by Robert Warren.

George Abernethy was elected Oregon’s first and only provisional governor in 1845 and 1847, right around the time when melodeons were becoming fashionable. Shipping such large items necessarily meant sailing around Cape Horn at the southern tip of South America, which was a long and dangerous journey, and probably made moving things very expensive. (Bafflingly, it would appear that sometimes melodeons were moved overland, across the Oregon Trail. I remain endlessly fascinated with the things that people managed to bring along with them on the trail.) I have been unable to find anything more about Allie Werner, so we must take this part of the story at its word. From there, however, it moved into the Irvin family and ended up with John Leach and Lilla Irvin Leach.

John and Lilla were both descended from families that crossed the Oregon Trail. John’s family included Elias and Lucinda Ann Brown, who set out for the Oregon territory in 1847. Lilla’s grandparents came across the plains in 1848, and their son, William Irvin, married Lydia Ann Hewitt of the Aurora Colony in Oregon. John and Lilla first met at Forest Grove Academy, where he was studying pharmacy. John went on to own and operate the Phoenix Pharmacy on Foster Avenue in Portland. Lilla was a botanist who discovered five plant species, including Kalmiopsis leachiana, a flowering plant endemic to the Siskiyou Mountains in southwest Oregon. Their home and garden, which Lilla left to the City of Portland in her will, is open to the public as the Leach Botanical Garden. Lilla Leach bequeathed a few specific objects directly to OHS. She then left most of her possessions to her nephew, Winfield H. Atkinson, but with the proviso that he “turn over such of the relics and keepsakes as he deems suitable to the Oregon Historical Society.” This accounts for the majority of objects related to the Leaches at OHS, but the melodeon desk was one of the few objects that was specifically donated by Lilla.

It is unknown when the melodeon was turned into a desk, although it may have happened when it was owned by John and Lilla. News from the Oregon Historical Quarterly from 1929 mentions objects that John displayed in his pharmacy, with no mention that the melodeon was actually a desk: “An exhibition of pioneer and historical relics displayed by John Leach in the Foster Road drug store. In the exhibit were firearms dating from the Revolutionary and Civil wars, rifles and revolvers from the Aurora Colony, and a melodeon that belonged to Governor George Abernethy.” Or perhaps this was an omission, and the melodeon was converted previously by the Irvin family, or even by Allie Werner. Without finding more information, we will likely never know. John Leach added the plaque, however, as he was a keen metalworker and also liked to add historical notes to their possessions where he felt it was important. From a museum documentation point of view, it is certainly helpful to find the history right on the object! 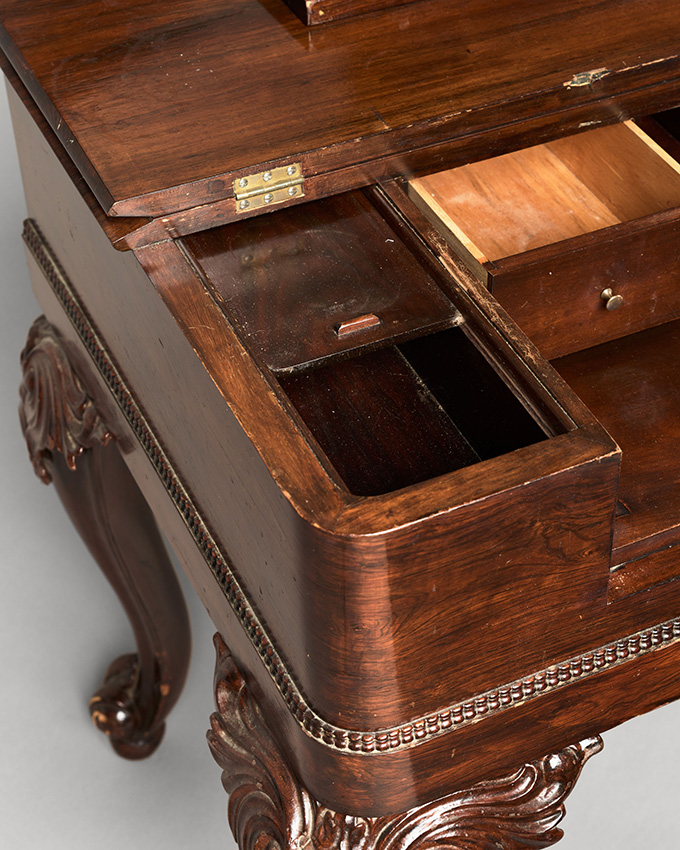 This detail shows desk compartments with sliding tops that have been inserted on each side of the converted melodeon. OHS Museum, 80-181.249. Photograph by Robert Warren.

Drawers have been inserted behind where the melodian keys would have been. This is usually where the manufacturer name would be located. OHS Museum, 80-181.249. Photograph by Robert Warren.

We also don’t know the original maker of the melodeon. Manufacturer names were generally located above the keys, where the drawers are now, so this information was probably lost along with the conversion to a desk. Without the manufacturer name we cannot definitively date it either, although the association with Governor Abernethy definitely narrows it down. One of the joys of museum work is tracking down information and revealing the whole history of the objects that we care for, so I hope that some of this information will one day come to light.