Toma Villa created this painting during the Museum at Warm Springs 2018 Treaty Conference, drawing on themes and ideas discussed on stage. A live feed brought the presentations into his space, and attendees visited and watched throughout the event.

There is a special warmth that comes with being invited and welcomed to a place where one is an outsider. For two and a half days in October, I joined with the Confederated Tribes of Warm Springs Indian Reservation community as well as members of other Tribes, and a number of outside scholars and staff from other cultural organizations, to learn about and reflect on the 1855 Treaty with the Tribes of Middle Oregon. The conference was organized in honor of the twenty-fifth anniversary of the Museum at Warm Springs, where several pages from the original treaty were on display, on loan from the National Archives in Washington, D.C. Themes of sovereignty and culture wove throughout the conference, which felt as much like a community or family gathering as it did a symposium. Through bringing scholars and regional leaders onto the reservation to talk and listen directly to Tribal members, conference organizers created a unique opportunity for fostering a shared understanding of law, culture, and history.

Before lunch on the first day, we each had a cup with a small sip of water placed before us, and it was explained that, after the pre-meal prayer is given, the water is to be drunk, with gratitude for its centrality to our lives. Each meal began with spiritual practice, and some of those prayer songs are still echoing in my head now. I was struck by the chorus of singing that often came from the elders and other community members who gathered at tables in the front of the space. There seemed to be a power in that collective knowledge and practice. Having studied Oregon history for many years, I am aware of outsiders’ repeated attempts to destroy Indigenous peoples’ deep, spiritual connections to water and other resources. Witnessing and participating in some of those rituals emphasized the importance of Tribal sovereignty, which is legally protected by the treaties and which was a focus of many of the conference presentations.

“Conference organizers created a unique opportunity for fostering a shared understanding of law, culture, and history.” 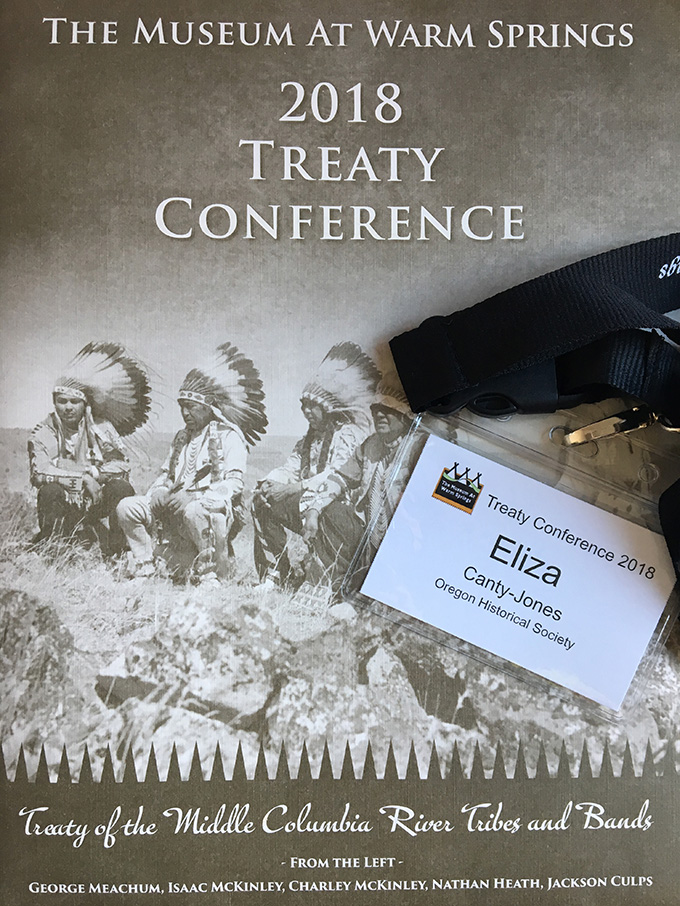 On the first day, Walter Echo Hawk, an attorney and tribal judge, shared with the group the importance of international and national laws in setting up the framework for treaties as binding agreements. He spoke about how the U.S. Constitution outlines treaty-making powers — specifically referring to treaty-making with Indian nations — and reviewed the significant U.S. Supreme Court decisions that have confirmed the treaties as lawful and compulsory. He also introduced us to the United Nations Declaration on the Rights of Indigenous Peoples, noting that, initially, the United States was one of four nations voting against the declaration (the United States, Canada, Australia, and New Zealand have since reversed position).  Echo Hawk and others emphasized the differences and connections between the legal rights as outlined in treaties and the laws of the land, which were given by the Creator to the people when the world was young.

Phillip Cash Cash, a fluent speaker of Nimiputimt (the Nez Perce language) who studies endangered languages of the Indigenous Southern Plateau, offered a deep reflection on those natural laws, known by some as tamanwit. I was introduced to that word while working on George Aguilar’s 2005 book, When the River Ran Wild! Indian Traditions on the Mid-Columbia and the Warm Springs Reservation. As I understand it, tamanwit defines the relationships among humans, and between humans and animals, plants, and landscapes. Having been raised in such a different culture, I have struggled to comprehend the deep Indigenous connection to the land, and I was grateful to be in the room while Cash Cash talked about what is necessary to be a “real human being.” 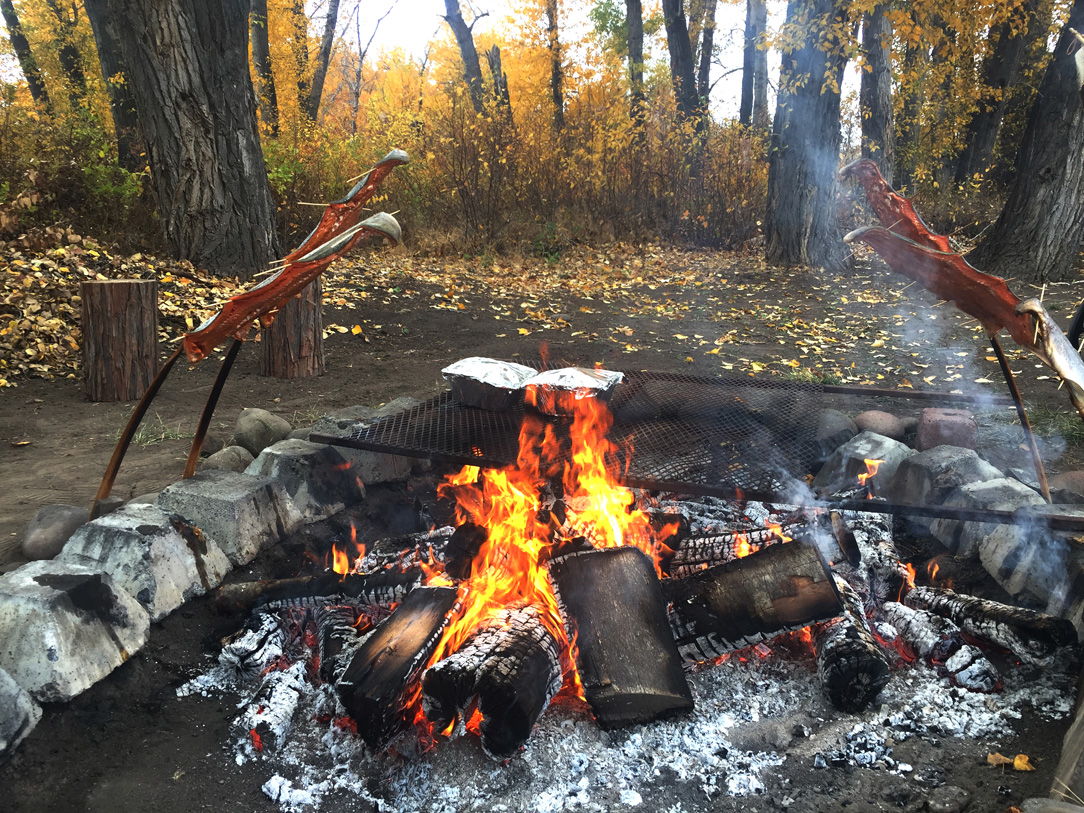 For our final meal, Brigette McConville and her family prepared salmon and other traditional foods. As always, we gave thanks and drank water before beginning the meal.

The legacy of Termination was present throughout the conference, and there was a recurring theme of the need for Tribes to be internally cohesive in order to maintain strength in the face of destructive, outside pressures. On the second day, Alfred “Bud” Lane III of the Confederated Tribes of Siletz Indians talked on the subject of “Traditional Government Powers — Executive Powers.” He began by recognizing the support for Siletz that was given by the Warm Springs and Yakama people, who both stood up for Siletz restoration in 1977. Charles Wilkinson explicitly cautioned that the knowledge of termination cannot be allowed to die, because the effort will return. Lane grounded his comments on executive powers by telling the Siletz creation story. He then described the traditional governance structure among the villages that would be collected onto the Coast Reservation, where the people spoke over fifty languages.

Other presentations delved into subjects such as economic sovereignty, traditions of Indigenous female leadership, American Indian languages, and international Indigenous sovereignty. Throughout the gathering, people engaged in artistic creation. Toma Villa painted a mural in representation of the event, and women did beadwork and weaving as they listened. The tent was filled with people wearing wing dresses, basket caps, beaded hair clips, ribbon dresses and shirts, and necklaces strung with rich strands of dentalium and other shells. One woman displayed a dress that had been in her family for 150 years or more, decorated with trade beads from the exchanges of the early nineteenth century. All Native speakers began their talks in their Native language, and some spoke at length in those ancient tongues.

OHS was an early and proud sponsor of the Warm Springs Treaty Conference, as we should be.  To understand the history of Oregon, it is crucial to learn from and about the Indigenous people of this place. Their story here is many millennia longer than anyone else’s, and their experiences of the past two centuries tell us so much about the meaning of the transformations that have happened here during those recent times. I am grateful for the many opportunities my work affords me to join the spaces where that learning takes place. 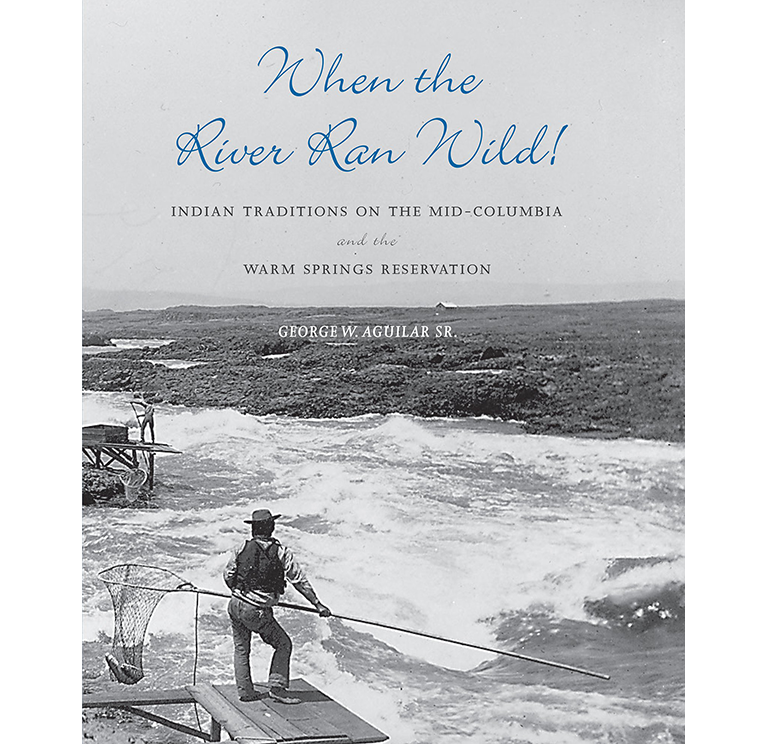 When the River Ran Wild! Indian Traditions on the Mid-Columbia and the Warm Springs Reservation

"Nearly seventy-five years of my lifetime have come and gone since hearing of the sparse historical events from the old-timers," American Indian elder George Aguilar tells us. "It’s my turn now." When the River Ran Wild! is Aguilar's recounting of events he heard about while watching his grandmother make moccasins by the light of a coal-oil lamp and while strapped to the back of his aunt's horse on the way to the...