In an excerpt from a 1994 oral history interview by Youlee Yim You, retired attorney Velma J. Jeremiah relays a story about appearing on the television show “To Tell the Truth.” OHS Research Library, SR 1239, tape 6, side 1.

Sometimes, when the interviews grow long, great stories are buried alive under mountains of technical information, political drama, and judicial minutiae. Sometimes they’re sweet, sometimes they’re funny, and sometimes they’re terrifying. But all of them are worth a few minutes of your time.

This story is from Velma J. Jeremiah, who was, as she describes herself, “an old woman attorney [who became] a comic.” More specifically, she was an attorney in Portland, Oregon, who, in 1975, was appointed as the first female partner at Davies, Biggs, Strayer, Stoel & Boley (now Stoel Rives) — and the first female partner in a large Portland law firm. After her retirement in 1986, she pursued a career as a stand-up comedian. The following excerpt is from an oral history interview by Youlee Yim You (SR 1239, tape 6, side 1), where Jeremiah recalls an appearance on the television show To Tell the Truth. 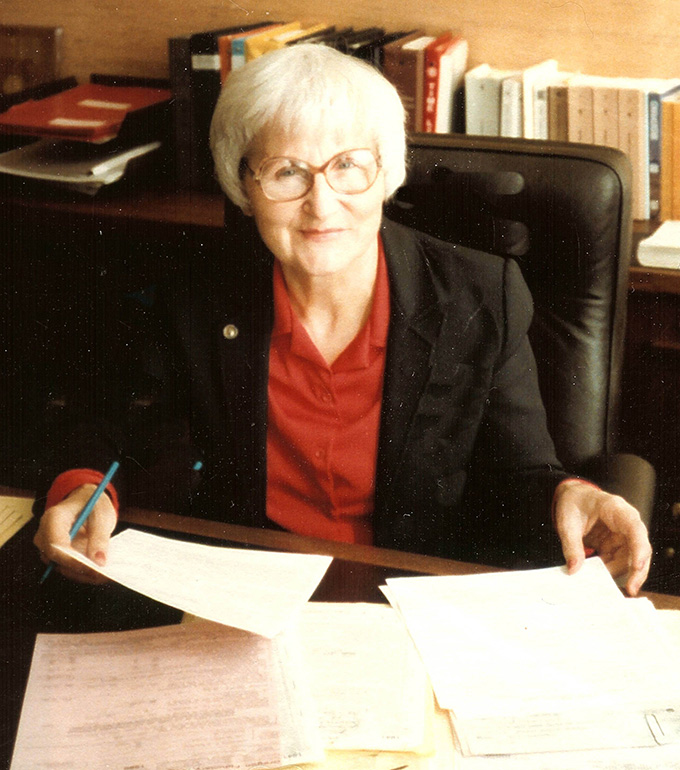 Velma Jeremiah sits in her office at Davies, Biggs, Strayer, Stoel & Boley (now Stoel Rives) in the 1970s, where she became the firm’s first female partner. After her successful career in law, Jeremiah became an accomplished stand-up comedian. Image published in the Fall 2012 issue of the “Oregon Historical Quarterly” with permission from Velma Jeremiah.

Jeremiah: So that show [To Tell the Truth] — I don’t know if you’re familiar with it at all, but what they do, they normally have three people up there. And the [emcee] reads something about one person and the panelists ask questions of these three and then each of them pretend[s] to be that person that they’re profiling. Then, the panel has to guess which one is the real [person], whoever it is they are profiling. That had been the format of the show for a long time. Unknown to me, they had added something they called a one-on-one, and so then [one of the show’s coordinators] told me the last time he called me before I went down, he says: “The producer has decided to use you on the one-on-one.”

I was supposed to go into the studio and be briefed [ahead of the show], but the airline, as usual was late. There were terrible connections, and I didn’t get there until way late, so he briefed me over the telephone on what my story would be. And that was kind of fun. So, my false story was to be that I’m an inventor; I invented the pop-up turkey thermometer.

And the other [true] one is that I’m a stand-up comedian.

[The contestant] guessed that I was the inventor.

And the panel got to ask me questions. And they asked me things like, you know, “How come you did this?”

And I said, “Well, I was working for Swift & Company as a chemist” — oh, what did I say? “I was working for them and they came around and asked me to invent something that would make it easier for women to buy more turkeys.”

So, I had this whole story made up. And the panelists — that was kind of funny — one of the panelists asked me, “How do you know when the turkey’s done?”

I said, “Well, when the little red button pops up.”

[The panelists were] Dorothy Kalgallon … She’s been around on these talk shows forever. A very attractive, charming lady, and dressed beautifully. And David Niven’s son. I’ve forgotten what his first name is. [Another panelist was a woman] who was with a magazine in the East Coast, and I didn’t know her. The other was a movie star, actor who plays the sheriff on — can’t remember the name — some series. And he always was sort of the buffoon. He would ask the questions that were supposed to be funny or silly. They didn’t know which one was true either, but they would ask questions…[and] the audience listened to the responses.

It was fun to see the whole process. [Then] we were herded into this big room and then they fed us lunch, and you know — then after my part was done — I was the third show taped, I think. Then I could sit in the audience and watch the other two [being] taped, and it was all very interesting to watch how they do it and then when you see it come on the air and you know what’s going on in the background. After the late afternoon, when the panelists were coming on, we were not allowed out of our room alone. If we needed to go to the restroom, one of the young women who worked there would [escort us]. That was to be sure that the show wasn’t fixed, that we didn’t run into one of the panelists in the hall and give anything away. They were very careful about that because of the scandals that had occurred years ago in these shows. And between each of the tapings, the panel had to go off and change clothes. They couldn’t have the same dress on the next day, or the same — so there’d be a little pause and the audience would sit there.

So, I had a thousand dollars!