Home Blog These Are a Few of My Favorite Swords

In 2018, OHS museum staff created new storage for the edged weapons collection and took the opportunity to update catalog records. Included in those records are the histories of the Oregonians who carried them. Pictured here are the pH-neutral blueboard storage trays that contain ethafoam blocks lined with Tyvek that hold the sword blades. The corresponding scabbards are wrapped in Tyvek and stored on the other side of the tray.

As each object in the Oregon Historical Society (OHS) museum collection passes through our hands, we use the opportunity to add information to its record, whether it’s an update on its physical condition or a previously undiscovered link to Oregon’s past. In 2018, OHS museum staff created new storage for the edged weapons collection and used the opportunity to update catalog records, adding descriptive information and provenance when available. For those not familiar with museum terminology, edged weapons are a separate category from projectile weapons and blunt force weapons and include mainly swords, sabers, and bayonets. OHS also has a few machetes, bolos, barong, trench knives, a rapier, a few spears, and a halberd. During the rehousing process, we documented various sword-carrying Oregonians of the past. Here are a few of their stories.

This sword belonged to Moy Bow Wing, a second-generation Chinese American who attended Hill Military Academy in the late 1800s and early 1900s and used the sword in drills. After graduating, Moy studied law at the University of Oregon and then Adelphia College in Seattle. He was the eldest son of Moy Back Hin, an influential diplomat, merchant, and leader in the Portland Chinese community. Moy used his father’s connections and his own tireless work ethic to advocate for the rights of Chinese immigrants and Chinese Americans. With his friend Seid Back, Jr., who also attended Hill Military and University of Oregon’s law school, Moy helped found a Portland-based advocacy group called the American-Born Chinese Association. He died in 1917 of pneumonia at age thirty-four, leaving behind a young family and a legacy of activism. You can read more about Moy Bow Wing’s and Seid Back, Jr.’s, roles as pioneering Chinese law students in the Summer 2019 issue of the Oregon Historical Quarterly.

Hill Military Academy was a secondary school for boys and young men that was originally located in northwest Portland but later moved to Rocky Butte. Moy would have attended its first location at NW 24th Avenue and Marshall Street in Portland. His nephew, Donald Moy, donated the sword to OHS in 1995. 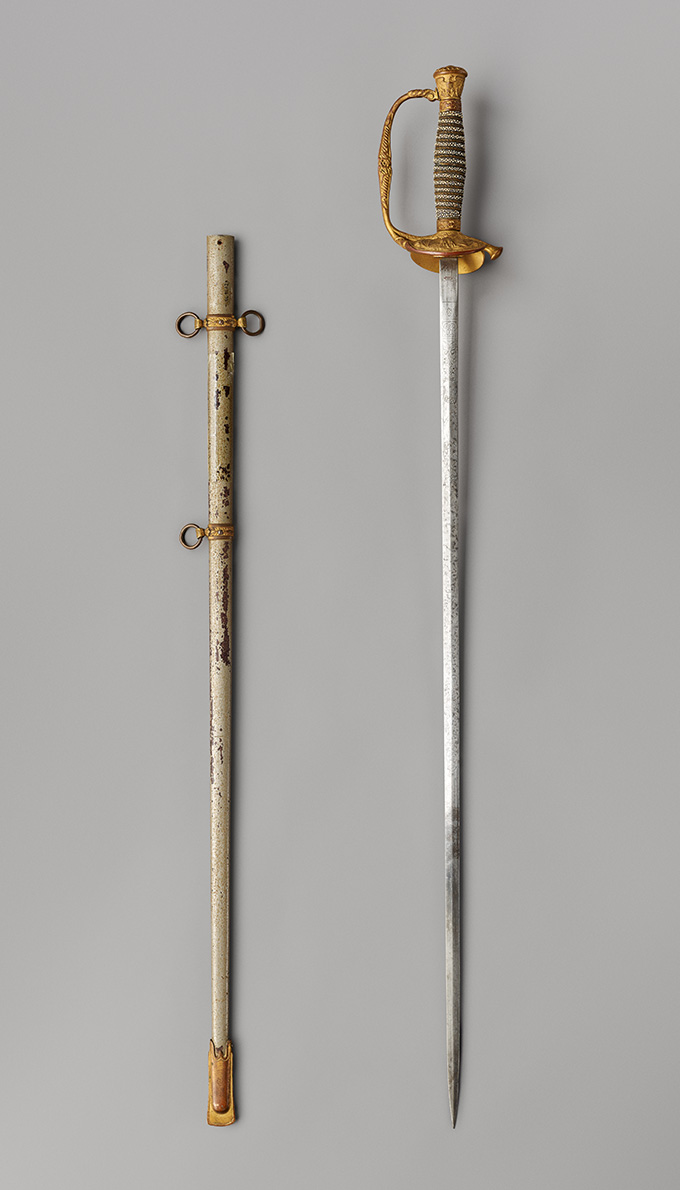 This presentation sword, manufactured by M.C. Lilley & Co. in about 1901, belonged to Moy Bow Wing, the eldest son of Moy Back Hin, a diplomat, merchant, and leader in the Chinese community in Portland. The blade is etched with an acanthus motif interspersed with patriotic and military designs that are matched on the hilt guards in relief. The grip is sharkskin wound with gilt brass wire. A nickel-plated metal scabbard with gilt brass belt rings and drag accompanies the sword. OHS Museum, 95-95.1.1,.2 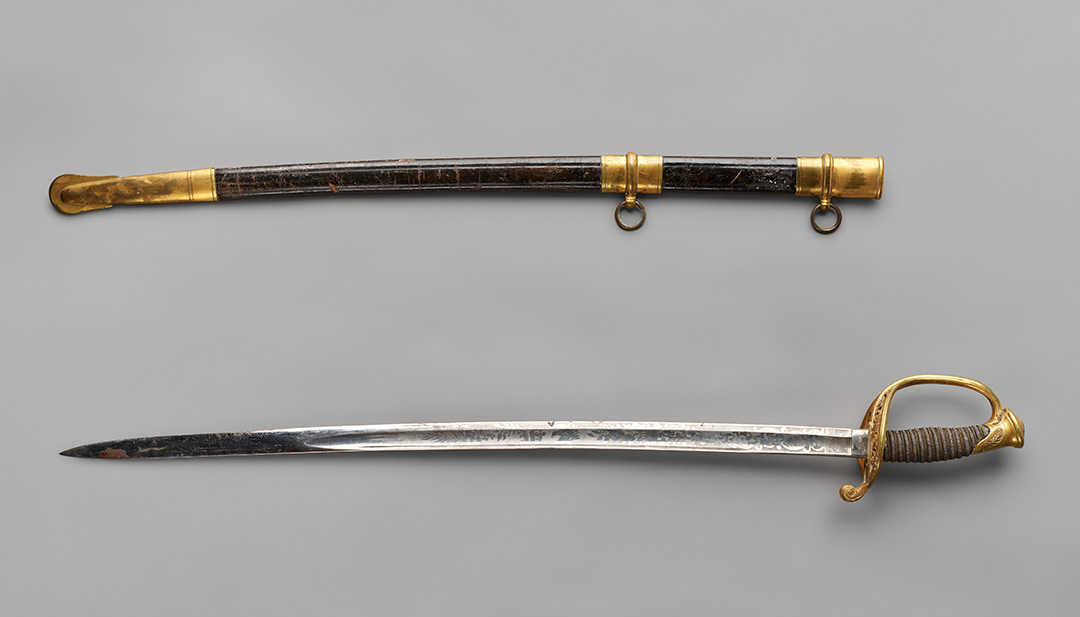 Cyrus H. Walker of B Company, First Oregon Volunteer Infantry, owned this infantry sword made by Ames Manufacturing Co. The sword dates to about 1861 and has a short, single-edged blade etched with an acanthus motif. The gilt brass hilt is decorated with openwork acanthus leaves and has a sharkskin grip. The accompanying scabbard is comprised of wood lined with black leather and accented with brass belt rings and drag. OHS Museum, 570.1,.2

This sword belonged to Cyrus H. Walker, a major in and later the captain of B Company, First Oregon Volunteer Infantry. State officials organized the First Oregon in 1864 to replace regular army units that had left in 1861 to fight in the U.S. Civil War. The government stationed regular units in the region to explore, build roads, protect Oregon Trail migrants, and guard Indians on reservations in western Oregon. During the early 1860s, the rapid influx of miners and newcomers to Oregon and Washington led to sometimes-violent confrontations between Euro-Americans and local Native populations, which convinced Oregon officials to recruit volunteers for six infantry companies. Walker and his company escorted wagon trains through Southern Idaho.

Cyrus H. Walker was born in 1838 at the Whitman Mission near present-day Walla Walla, Washington. In his later years, he claimed to be the oldest living white man born west of the Rocky Mountains. He donated his infantry sword to OHS in 1900. 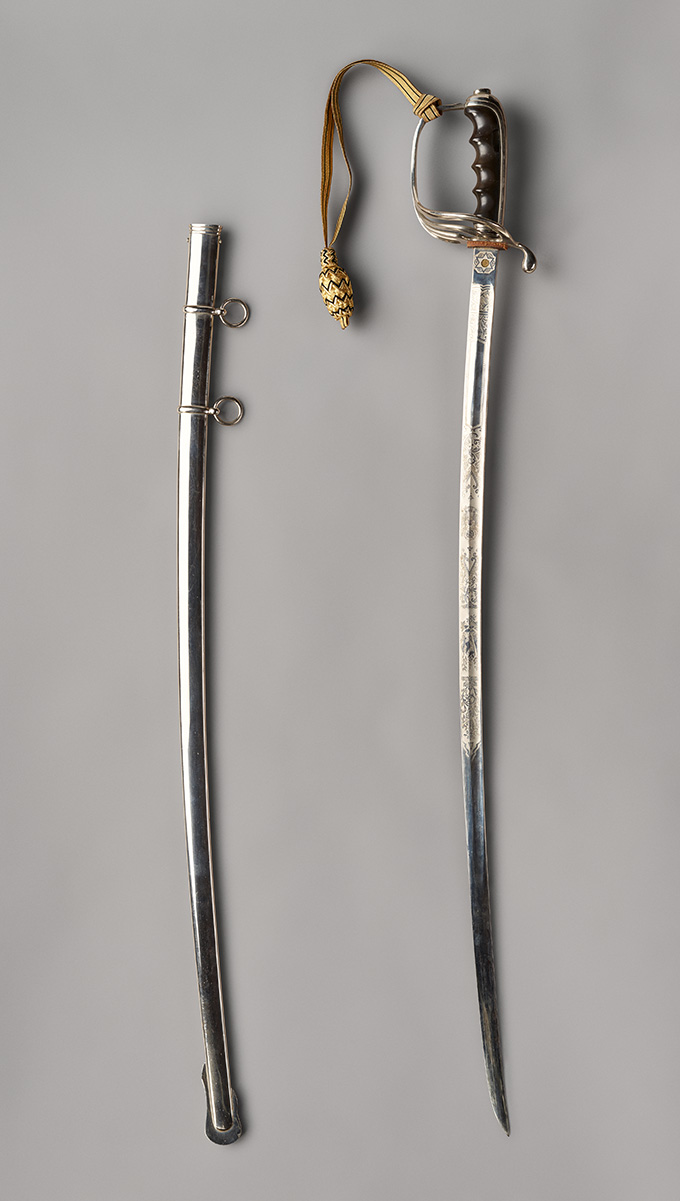 This presentation sword and nickel-plated scabbard belonged to George F. Jeffcott, who served in the U.S. Army Dental Corps from about 1930 to 1960. Its narrow, curved blade is etched with a military motif, and it has a nickel-plated half basket hilt, black plastic grip, and braided gilt tassel on a matching ribbon tied to the knucklebow. The sword and scabbard were manufactured by N.S. Meyer, Inc. in about 1935. OHS Museum 70-60.1.1,.2

Here’s a concept to fuel your nightmares: dentists with swords. The owner of this blade, George F. Jeffcott, served in the U.S. Army Dental Corps from c. 1930 to 1960, retiring as a colonel and Chief of Dental Service in Europe. Prior to World War II, a sword was still a required component of every army officer’s dress uniform. Jeffcott purchased his sword in El Paso, Texas, when he attained the rank of 1st Lieutenant in 1935. During his long career, the military stationed Jeffcott in Puerto Rico, Germany, and the Middle East, and he contributed to his field by writing a book that analyzed dental service problems during World War II. In 1955, he moved back to his native Oregon and practiced dentistry. We wonder if he displayed the sword in his waiting room as a subtle warning to patients who didn’t floss.

This rapier is likely the oldest blade in the collection, dating from about 1630. It has a short, narrow blade and a silver filigree hilt with wire-wrapped grip. The hollow openwork pommel is decorated with embossed figures of serpentine demons and satyr, and a heavy tassel (likely dating to a later era) of gilt braid on matching ribbon is tied to the pommel. The rapier includes its original scabbard of rigid black leather with silver chape (tip) with a belt hook tied near the top with sinew. OHS Museum, 5345.1,.2

Perhaps the oldest blade in the OHS collection, this rapier made the journey across the Atlantic in 1630, starting in Plymouth, England, and ending in Plymouth, Massachusetts. The original owner, Thomas Pope, served as a county constable in Colonial Massachusetts but had unfortunate legal troubles: he received a fine for wrestling with his neighbor and striking his neighbor's wife, and later for "vilifying the ministry." Pope gave the rapier to his son, Capt. Seth Pope, a wealthy Massachusetts merchant and landowner, who gave it to his son, Lemuel Pope, a militia captain. The next to receive the sword was Lemuel Pope's son, also named Seth Pope, who served as a colonel in the Continental Army during the American Revolution. "Pope IV" passed the sword to his son, Yet Seth Pope (his real name), who passed it to his son, another Seth Pope, a sea captain who brought the sword around Cape Horn to Oregon. The line of succession ended with Captain Seth Pope's son, the ultimate Seth Pope and the great-great-great-great grandson of the original owner, who donated the rapier to OHS in 1914.

The OHS collection includes swords and other edged weapons from nearly every war of American involvement up to World War II, plus several wars in which the U.S. had no role — have you heard of the First Schleswig War? I hadn't. Many swords never saw combat but belonged to members of fraternal societies such as the Knights Templar and the Woodmen of the World. The stories these objects tell can be violent, hopeful, and bizarre, often all at the same time. In processing and repacking this collection, our hope is to preserve it in both a physical and a biographical sense so that future generations of Oregonians can learn from it as we have. 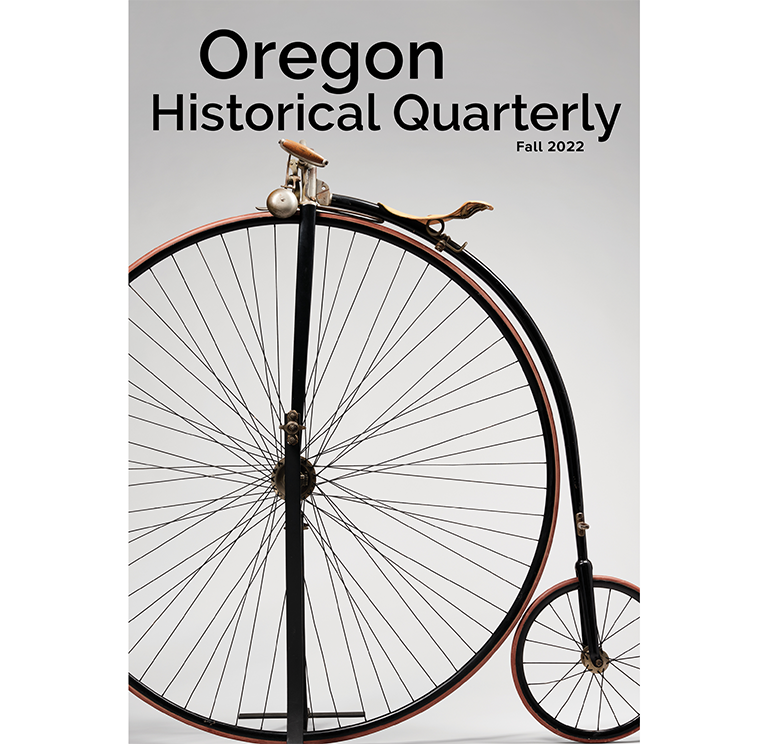 In this issue, authors explore mental health care in Oregon from the 1950s to 2000, early bicycling and road development in Astoria, Justice Betty Roberts’s work for equality in Oregon, and the discovery of timbers of Oregon’s Beeswax Wreck.