Home Blog “The Moon Shines on the Moonshine”*: An Oregon Bootlegging Story

If sobriety in Oregon is a line in the sand, it is an askew one, windswept by centuries of coastal winds and broken up by rivulets of runoff.

In the 1820s, the British Hudson’s Bay Company insisted all liquor be removed from business transactions with Native people and wrung their hands when American fur trappers lubricated trading relationships with kegs of whiskey. Missionaries helped form the first Oregon Temperance Society in 1836 — the handful of attendees at these early meetings may have failed at “saving” the Indians’ souls, but by god they could build a wall of shame around their own livers.

From then on, every iteration of Oregon law would include a temperance/prohibition article, clause, or act. Oregon was a fair reflection of the country in this matter, in no small part because the region was being permanently settled by white Protestants. But liquor was profitable, and many well-heeled pillars of society got their start in the liquor business. More than one Oregon bank sits on a foundation of retailing whiskey.

Into the twentieth century, lawmakers worked on tying the perfect Gordian knot that both protected the liquor industry and enforced the citizenry’s sense of decency. Drinking held hands with poverty, neglect, marital abuse, and idleness. Drinking was also a fine brandy in a happily furnished study with bons amis. It was familial ruin and it was fraternal fortune. The knot kept slipping.

By the time temperance and woman suffrage began riding the same political horse at the turn of the twentieth century, paternal inebriation had become a public health crisis, and people demanded an all-or-nothing solution. So, Oregon chose the empty glass and passed Prohibition in 1914, to be enforced in 1916. The state’s beloved breweries made soda pop or rented out to dairies or just closed. (Alcohol was still legal as medicine, however, so it was helpful to develop a cough.) 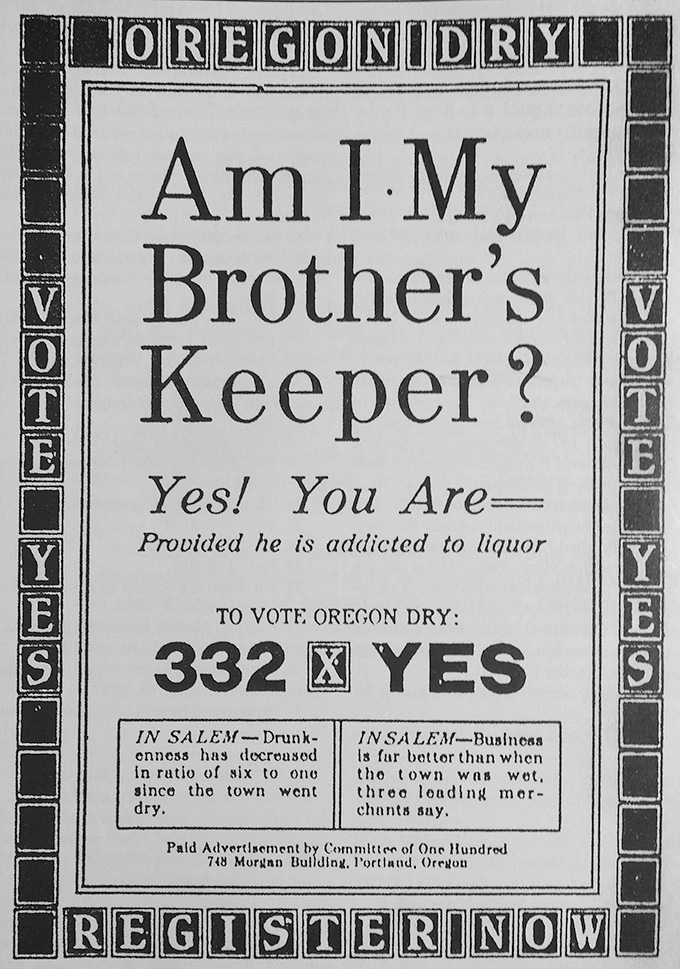 This advertisement, paid for by the Committee of One Hundred, was published in the “Monmouth Herald” on September 11, 1914. It addresses the statewide prohibition measure turning Oregon into a dry state — some towns opted to retain local prohibition ordnances on the books long after the federal and statewide repeal of Prohibition in 1933. OHS Research Library 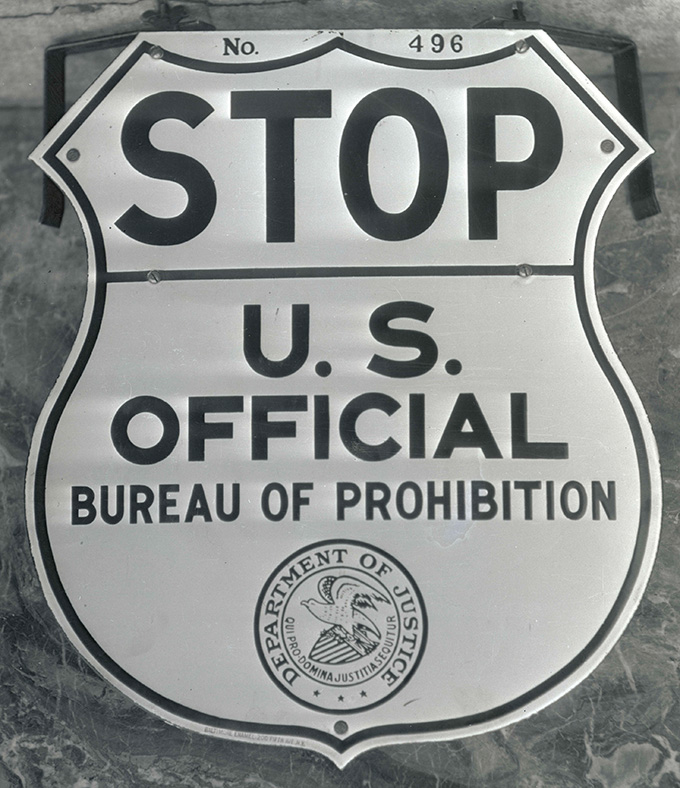 The 18th Amendment to the U.S. Constitution, prohibiting the manufacture, transportation, and sale of intoxicating liquors, was ratified by states in January 1919 and took effect in January 1920. This image of a U.S. Bureau of Prohibition sign is held in the OHS Research Library’s “Oregon Journal” Collection, Org. Lot 1368, box 371, 0371N3271

When federal prohibition hit the nation in 1919, Oregon had a few years’ head start on what would become the most successful consequence of Prohibition: bootlegging. A network of manufacturers, distributors, and buyers spanned the West Coast, north into Canada. For the most part, rum-running was a profitable and savvy business, and enforcement agencies were able to slow the liquor flow with the same effectiveness as a finger in a leaky dam.

Still, there were moments of excitement.

On February 7, 1932, a boat named Sea Island manned by a Canadian trio — Charles Ryall, William Kerr, and Stanley Babcock — ran aground in Oregon’s Whale Cove, locally known as Bootlegger Bay. The cove was ideal for small boats sneaking to shore in the dead of night to drop off bottles of Hennessy. The Canadians unloaded 400 cases of whiskey and several dozen bottles of 190 proof alcohol and buried it in the sand. Then — probably — they set the boat on fire to disguise its purpose and caught a ride to Portland with the “shore gang.” But the clean getaway was cut short when the car flipped over near Hebo on Highway 101. While the men dozed on a bus (then called a “stage”) to Portland, police investigators pulled the abandoned car out of the ditch and checked the license plate, which had been illegally switched. A quick call to Portland, and police were waiting for the bootleggers to give them a ride back to Lincoln County, to the Toledo jail.

The burning boat in Bootlegger Bay was suspicious enough that people began to poke around in the sand, unearthing most of the booze, which was moved to the Toledo jail. And there they all sat, the three Canadians and their haul, from February 8 to March 19, while Oregon got its pound of penitential flesh before federal immigration took over.

But bootlegging is a conspiratorial business, and the Oregonian part of the conspiracy would have its payday. Armed with machine guns and welding torches, men in four vehicles drove down the quiet streets of Toledo on March 19 and pulled up to the jail. While gunmen stood guard from one of the sedans, the others burned their way through three locks and a steel door, loaded as many Canadians and bottles of liquor they could into two vans, and headed north. They passed police cars barreling south from Tillamook after a snitch called in the jailbreak, which was perhaps the group’s last triumphant moment before everything fell apart. 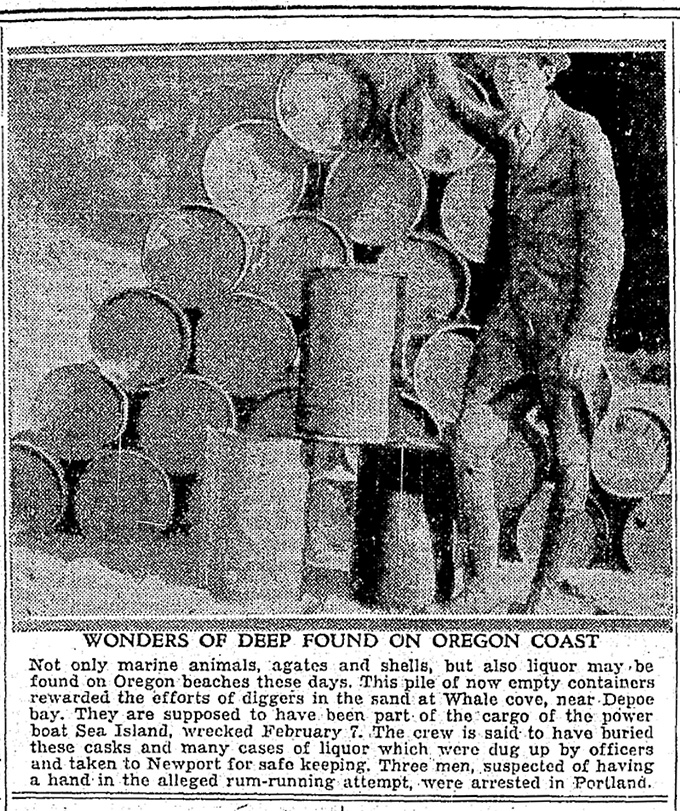 The “Oregonian” reported on February 15, 1932, that “wonders of deep found on Oregon Coast” included not only “marine animals, agates, and shells, but also liquor.” That liquor included 400 cases of whiskey and dozens of bottles of 190 proof alcohol that Canadian bootleggers stashed in the sand when their boat ran aground in Oregon’s Whale Cove. 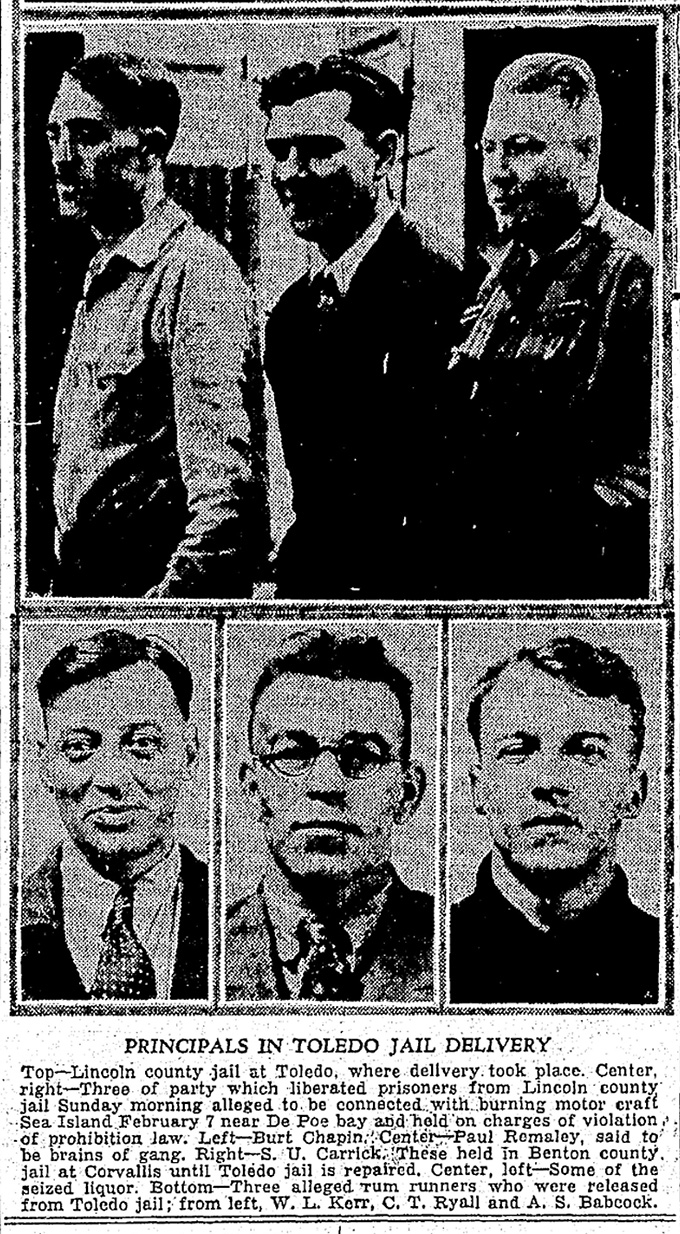 On March 22, 1932, the “Oregonian” reported on the armed jailbreak, featuring photographs of three members of the party of liberators (top) and the three Canadian rum-runners (bottom).

The bootleggers made a classic rookie mistake: they stopped driving. The police had pulled a U-turn in Toledo and caught up with the procession on Highway 18, arresting most of the convoy when they pulled over at Grand Ronde. The men with machine guns fled into the night in the sedan, while the rest were divvied up according to which side of the county line they were arrested on — about half to Tillamook and half to Corvallis.

Trials were held, everyone pleaded guilty, and sentences were meted out, from a few months to a few years. The man who took the biggest hit was the supposed ringleader of the Oregon crew, Paul Remaley. He had been running liquor from stills around the Portland area, including in a Washington County barn, and was an international motorcycle racer famous for breaking a record riding from Mexico to Canada. He was known to race through Portland streets at a breakneck 70 mph and had enough whiskey irons in the fire that he was in and out of courtrooms for the next several years. The Canadians went home to Vancouver, British Columbia.

A few months after the arrests, in 1933, the 21st Amendment repealed Prohibition, leaving local governments to decide their own levels of legal inebriation. Despite its long relationship with temperance lawmaking, Oregon had grown accustomed to federal enforcement dollars, and counties did not relish having to pick up the bill for undercover officers and still bashers. Perhaps Oregonians were ready to drink again. The state legislature dug its heels in, but voters passed a repeal initiative and the bars were back in business. Mere days after repeal, legislators created the Oregon Liquor Control Commission (OLCC), mandated with many of the same duties it performs today. The OLCC’s primary guidelines — state-run liquor stores, limited distribution licenses, rules governing food and alcohol — were based on (wait for it) the Canadian system. 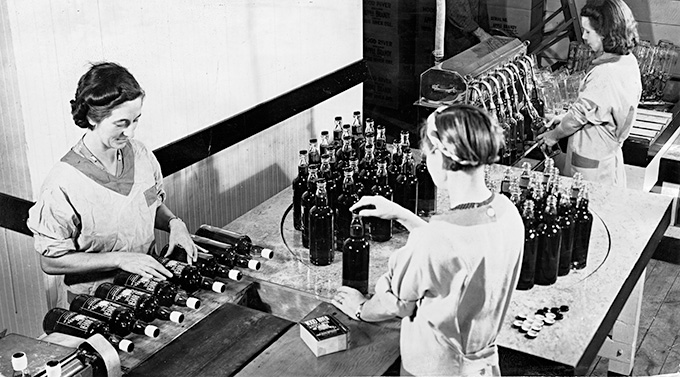 Hood River Distillers, Inc., received the first state distiller's license (DSP-OR-1) when it was established in 1934. The distiller is the largest and oldest liquor company in the Pacific Northwest. Here workers at the Hood River Distillers handle bottles in September 1940. OHS Research Library, ba010796.

The Oregon State Archives  has a great summary of the caper, with a guide to the characters involved, including sentencing details and Hollywood-worthy mugshots. But it leaves out the fate of the most victimized of the Whale Cove menagerie: the whiskey. The twice-seized bottles were sent to the U.S. Customs House on Broadway and Davis in Portland where on one July day in 1932 agents gathered in the basement and took turns hurling bottles against the back wall of the elevator shaft. As whiskey filled the shaft, it was pumped into the sewer where it emptied into the Willamette, was carried to the Columbia, and out to sea to dissipate into legend.