Wilber Henderson, a young Portland lawyer, was excited to read in the Oregonian that the four competitors, Harry Eugene Honeywell, John W. Berry, Roy F. Donaldson, and John Watts, would be recruiting local men as aides. He was disappointed, however, to see that the lucky fellows needed to weigh under 150 pounds to qualify. Henderson, sadly, didn’t think he could “strip under 165.” Still, he attended the gala for the pilots, which was held at the Benson Hotel on the night of June 10. 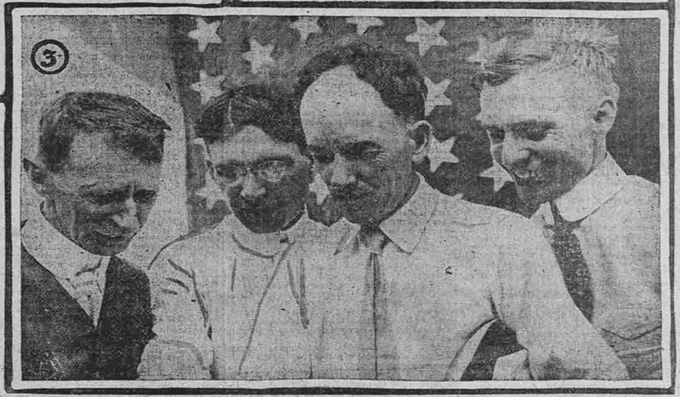 As luck would have it, he was seated next to one of the aspiring aeronauts, Roy Donaldson, who was the youngest of the competitors — the Oregonian described him as resembling “a matinee idol in appearance.” As luck would further have it, Donaldson had yet to choose his aide. Even luckier, it turned out that both men were originally from Illinois, and they hit it off immediately. When Donaldson was called on to give a speech at the dinner (after a few glasses of complimentary champagne), he spoke glowingly of his dinner companion, giving Henderson compliments that were “imaginary on his part,” and announced to the listening crowd that Henderson would be his ballooning aide in the Springfield.

In an oral history interview from around 1965, conducted by Charles S. Crookham (SR 9448), Henderson describes the many ominous portents of the next morning, before the race began. His friends showed up to the fairgrounds to see him off, and one after another, asked him if he had remembered to write his will. The sky grew darker to the east, promising a storm. And the band played an old Civil War song, “Just Before the Battle, Mother.” Yet, the race started without a hitch at four o’clock in the afternoon.

Even forty years later, Henderson vividly remembered the sights he saw during the first day of the race, as he soared above the clouds in the Springfield. He saw an inverted rainbow: “We were looking down on the raindrops, the bow of the rainbow was on the ground and the ends going off into the skies.” He remembered seeing the dome of the old capitol building in Salem silhouetted against the sun. Most of all, he remembered sitting atop the vast expanse of billowy clouds.

But their idyllic float above the clouds was not to last. Late that night, just after they had passed Roseburg, the weather turned. In the distance, they could see lightning flashing, and Donaldson and Henderson quickly found themselves lost in a sea of dense fog:

All of a sudden we just went into a black wall. Just pitch dark all around us.... We had no idea what direction we were going, of course. There was no fixed object. We had a compass, but the compass pointed north. So what? You didn’t know whether you were going with the needle, away from the needle, or sideways. You didn’t know.

After a few hours of struggling to pinpoint their position, they found themselves hovering over a body of water. Certain they had strayed out over the Pacific Ocean, Donaldson panicked and forced an emergency landing. “I should have said to start with,” explained Henderson at this point in his retelling, “all these men were afraid of the ocean…. This man, Donaldson, he’d never seen an ocean, he didn’t know what it looked like.”

And so, after venting the balloon’s gas, pouring out all their bags of sand, and throwing away as much of their equipment they could spare, the two men landed in the middle of a frigid lake. “He informed me on the way down,” Henderson said of Donaldson during their frenzied descent, “that he couldn’t swim.” 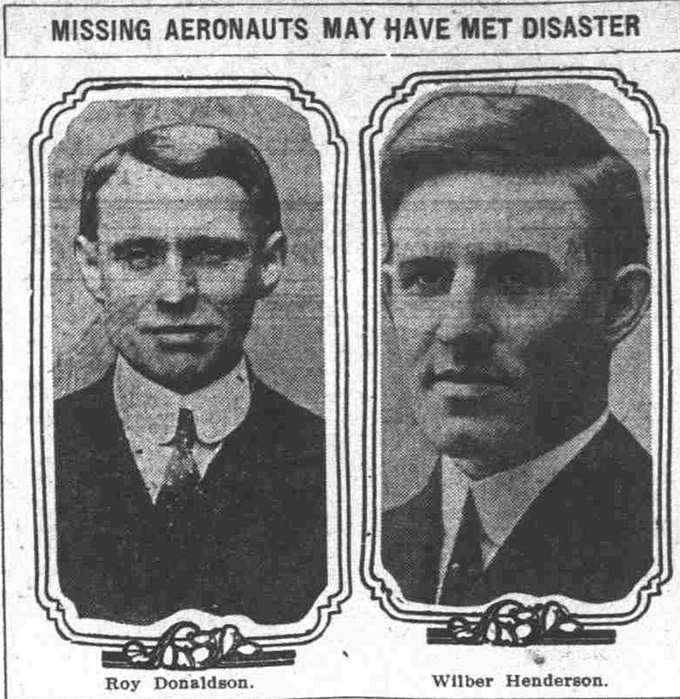 These photographs of Roy F. Donaldson and Wilber Henderson were published on page 2 of the “Oregon Journal” on June 16, 1914, alongside an article detailing search and rescue efforts.

So, Henderson was tasked with dragging Donaldson and their balloon to the snow-covered shore. He then stripped down and proceeded to swim back out into the lake, diving several times to retrieve much of the equipment they had tossed out during their descent. And there they stood, exhausted, cold, and wet in the snowy wilderness with soggy matches. Naturally, the skies immediately opened up and bestowed the downed balloonists with a classic Oregon drizzle, “which continued for the next three days.” Convinced that they were just south of Roseburg, the pair began following a river to the northwest.

They spent five days walking through woods that were seemingly untouched by human hands. Henderson was forced to pick up Donaldson, who had worn most impractical shoes, and carry him on multiple occasions across the river they followed. They began to despair of ever seeing home again, when at last they found a path worn into the forest floor. The next day, they emerged from the woods and stumbled into a couple of forest rangers cooking breakfast at Walker Prairie. It was then that they finally realized that the river they had been following was, in fact, the Bull Run River. The lake they had splashed down into had been Bull Run Lake. And they were definitely nowhere near Roseburg. 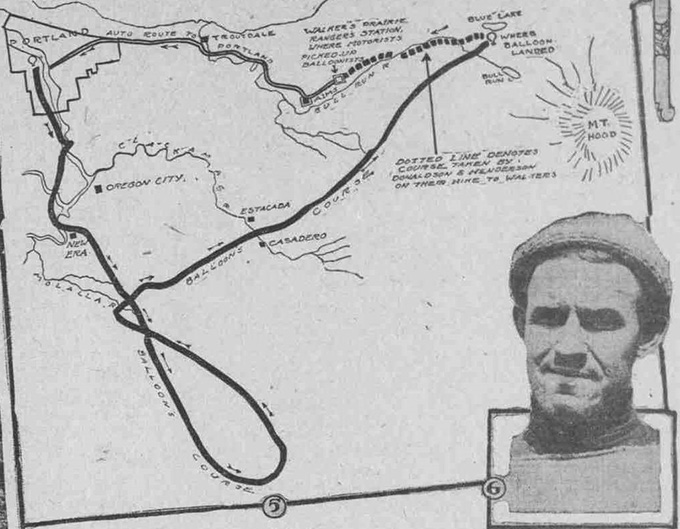 Initial reports stated that Donaldson and Henderson landed in Blue Lake. The remnants of the Springfield, however, were discovered in Bull Run Lake some months later during routine maintenance on the Bull Run Reservoir. A photograph of Wilber Henderson is featured in the corner of this map detailing their flight path. “Morning Oregonian,” June 18, 1914, p. 14.

Henderson and Donaldson were not the only participants in the 1914 race who encountered difficulties. In fact, every single competitor met with disaster of one form or another, and the coverage of their myriad travails was front page news for nearly a week.

Harry Eugene Honeywell and his aide, Dr. Edward Stewart, were hit by lightning three times the first evening of the race. Stewart described the experience to the Morning Oregonian, which reported on June 12, 1914: “Lightning struck the balloon three times. Twice, it was hurled bodily to the ground with frightful force. Twice, it was whirled in the vortex of the two opposing storms.” Honeywell was forced to make an emergency landing. Honeywell’s craft, the Uncle Sam, which had previously competed in the international Gordon Bennett Cup three times, was badly damaged. The pair only made it as far south as Oregon City.

John W. Berry and his aide, George Y. Morrison, also wrecked during the first night’s storm. Berry was injured, and Morrison sent out a carrier pigeon with word of their plight — but neglected to provide their location in the message, despite a scrawled, “Come quick.” They, too, had been knocked out of the skies by lightning, which caused Berry’s balloon, the Million Population, to explode. They fell 3,500 feet and landed roughly among the trees below. The search was brief, and the men were found just outside of Clarkes in Clackamas County.

John Watts brought as his aide Roscoe Fawcett on the ride, who was the sports editor of the Oregonian. Their balloon, the Kansas City III, lasted only a little longer. Like Donaldson and Henderson, they were lost in the sea of fog that hung over Salem during the first night. On the morning of the second day of the race, the aeronauts found themselves crashed on a mountain. After wandering the wilderness for nearly twenty-four hours, they made their way to a ranch a few miles outside of Cascadia.

The eventual rescue of Donaldson and Henderson was reported on the front page of the Morning Oregonian on June 18, 1914, a full week after the race began. Search parties, including one headed by Henderson’s law partner, W.M. Davis, scoured the state for the pair over the several days before the missing balloonists found the breakfasting rangers. In his interview, Henderson said that that very morning, the newspapers had advertised a reward of $250 for their bodies, “which was always very flattering to me.” 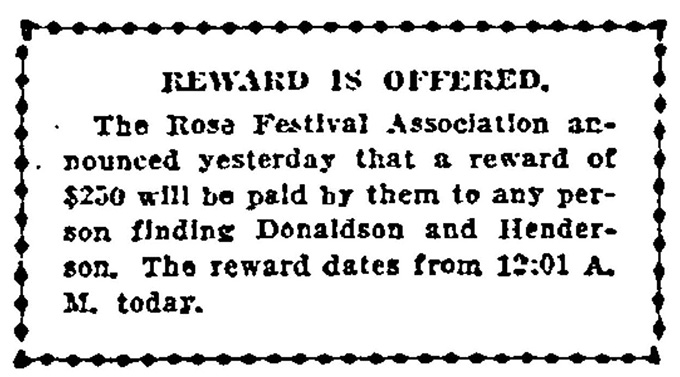 This notice of a reward for $250 was published under an article titled “Watts Believes Balloonists Lost,” in which John Watts is quoted as fearing that the inexperienced Roy F. Donaldson may have flown too close to the sun. Literally. “Morning Oregonian,” June 17, 1918, p. 8.

In the summer of 1914, World War I broke out in Europe, and John Watts never got the chance to compete in that year’s international race. The Gordon Bennett Cup balloon races resumed in 1920, only to be halted again by World War II. By that time, ballooning was considered passé, and the Gordon Bennett Cup focused instead on automobile and airplane races. Increasing interest in ballooning during the late 1970s prompted the Gordon Bennett Cup to reinstate the balloon races in 1983, and they have continued since — although the 2020 race was postponed until 2021 due to the COVID-19 pandemic. It is scheduled to take place in Wroclaw, Poland, on August 20, 2021.

Wilber Henderson would go on to represent Multnomah County in the Oregon Legislature from 1927 to 1929. Henderson’s detailed account of this balloon adventure is available online in his oral history on OHS Digital Collections.