Exactly eighty-three years ago this week, the German cruiser “Emden” chugged down the Willamette River with the Nazi naval flag, or ensign, at the stern. The ship moored in Portland at the foot of West Couch Street, just north of the Burnside Bridge. The photograph shows the flag at half-mast, likely honoring King George V of England, who died on January 20, 1936, the day the ship arrived in Portland.

Working with museum artifacts is all about telling stories. Objects leave fewer clues to their own stories than a letter or a photograph might, so a cataloger’s job is to collect and preserve not only the artifacts but also their background information. Sometimes this is easy, such as when donors share relevant information with us directly. Sometimes it can be frustrating, for instance, when the information gets lost or when an artifact is placed in the collection with no background information at all. Occasionally here at OHS, we find a story that is so wild that we need to share it with everyone in the building and then maybe lie down for a moment to catch our breath.

Enter an innocent-looking black hat ribbon, machine-embroidered with gold Gothic lettering spelling the words Kreuzer Emden, that documents the week that Nazis marched through Portland and the city threw them a party.

This ribbon for a naval service cap was issued to German sailors on the “Kreuzer” (cruiser) “Emden” in 1936. Found in a box with other naval hat ribbons, this item in the OHS museum collection led staff on a journey through a piece of Portland’s more alarming past.

I found this ribbon (or tally, to private collectors) at the bottom of a box of other naval hat ribbons. Kreuzer is the German word for cruiser, indicating a class of naval ship — leading us to believe the ribbon was intended for a German sailor. American soldiers and sailors collected these ribbons during several wars from ally and enemy ships alike. Because of this, we concluded that the Kreuzer Emden was a German ship that had met its demise at the hands of the U.S. Navy during one of the world wars. After researching news coverage in the Oregonian between December 1935 and February 1936, I found out that was not so. A ship called the Emden sank during World War I, but the Australian Navy, not the U.S. Navy, claimed responsibility. During World War II, the Nazis scuttled (intentionally destroyed) a second Kreuzer Emden to prevent its capture by the invading Allies. Neither ship engaged in any battles against the United States.

The truth behind this ribbon is more disturbing. The second Kreuzer Emden, the one that sank during World War II, visited Portland exactly eighty-three years ago, in January 1936, while on a training tour. Flying the Nazi banner proudly from its stern, the Emden chugged down the Willamette River, under a handful of bridges, and past several shipyards that would shortly produce Liberty ships for World War II. As the cruiser arrived, Portlanders lined the waterfront, not to protest the already-publicized human rights atrocities underway in Germany, but to wave hankies and exchange “heil Hitler” salutes with the Emden crew (Oregonian, January 21, 1936). The ship remained moored in Portland for over a week.

Because the visit fell so soon after Christmas, the Oregonian advertised the occasion as a demonstration of “peace on earth, goodwill to men” (Oregonian, January 21, 1936). The contradictions inherent in this suggestion did not go unremarked. One month earlier, a letter to the editor of the Oregonian suggested that Germany should practice goodwill toward its disadvantaged minorities before attempting to spread the spirit of Christmas abroad. “Good deeds, not warships, make for international friendships,” the letter concluded (Oregonian, December 22, 1936). The night before the Emden arrived in Portland, the local chapter of the American League Against War and Fascism held a well-attended meeting to plan a protest against the ship’s mooring. An actual protest materialized, but police arrested the organizers, apparently for failing to obtain a license for their gathering. They remained in jail for the duration of the Emden’s stay. 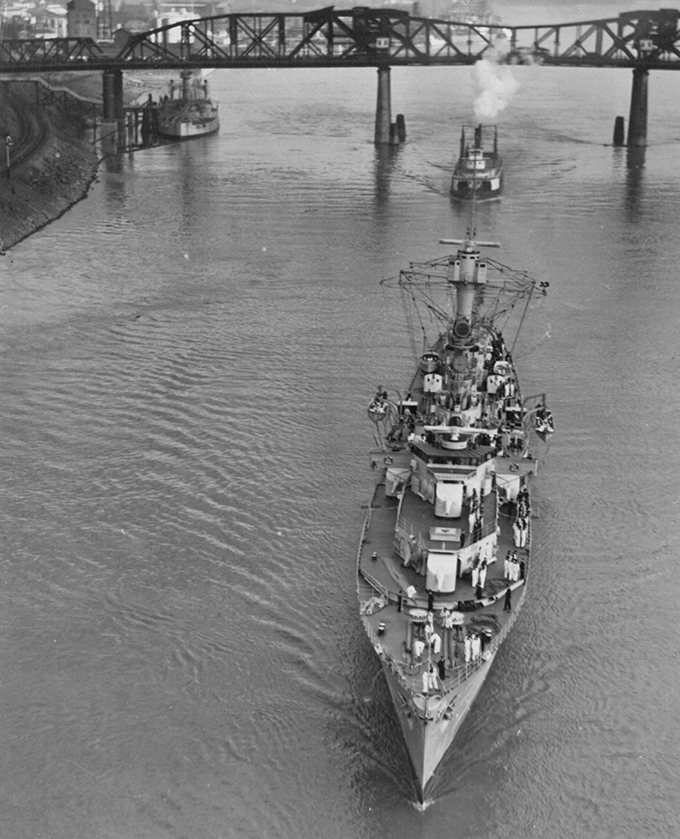 The German cruiser “Emden” passes under the Broadway Bridge in Portland on January 20, 1936. The ship docked for over a week, and despite the efforts of a few protesters, the city largely welcomed the crew's arrival.

The city’s general populace did not share these misgivings. Portland mayor Joseph K. Carson swept aside concerns raised by the Oregon Workers’ Alliance and others, saying that the visit was beyond his control. He exchanged cordial visits with the cruiser’s officers. German-American citizens groups prepared a week’s worth of social events, and the local stamp cancellation society offered to place a commemorative cachet on outgoing mail from the ship. The Emden band entertained a crowd of crewmembers and Portlanders at a ball held in the ship’s honor; later, the musicians visited several local hospitals and recorded a radio broadcast for KGW. The Emden soccer team played the local German-American team, resulting in a 3–2 victory for the Nazis (January 27, 1936). Several community groups hosted dances, and the Chamber of Commerce held a banquet for the ship’s officers and cadets. The chaplain of the Emden even christened a local baby and officiated a Portland couple’s wedding.

Two days before departing, the Nazi crew marched through Downtown Portland — out of respect for their American hosts, the sailors did not goose-step (Oregonian, January 27 and 28, 1936). Captain Bachmann of the Emden later wrote a letter thanking the people of Portland for their above-and-beyond hospitality. Portland was the only mainland U.S. stop on the ship’s tour. 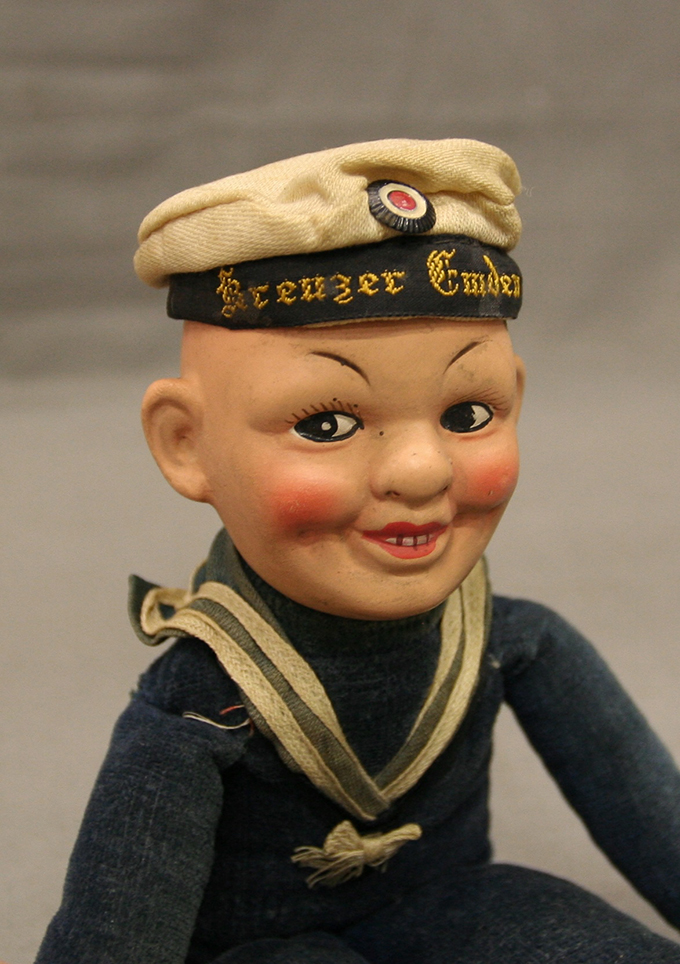 OHS’ museum collection also includes other souvenirs that Portlanders kept from the "Emden’s" 1936 visit, such as this commemorative sailor doll with the ship’s hat ribbon in miniature. Hello, children, it’s fascism time!

Ribbons and postmarks were not the only souvenirs that Portlanders kept from the Emden’s visit. The OHS museum collection also includes a commemorative sailor doll with the ship’s hat ribbon in miniature. Some artifacts have little to say beyond the simple fact of their existence. This hat ribbon, on the other hand, led me to the story of a lifetime.

The Oregonian coverage of the Kreuzer Emden’s visit was extensive between December 22, 1935, and February 13, 1936 — I consulted nearly thirty articles for this post. I have called out specific article dates only to cite quoted material and notable events. Digitized Oregonian pages are available through America’s News–Historical and Current, and Multnomah County Library cardholders can access them online via the Multnomah County Library website.