Home Blog “Watch the Back of Your Pass!”: The Art of Portland Traction Co. Weekly Passes

Today in Portland, Oregon, public transportation riders buy tickets at Tri-Met’s MAX train station kiosks or load their fares on reusable Hop Cards. These familiar objects are strictly utilitarian, and while designs have changed over the years, a ticket is, generally speaking, just a ticket.

To riders of public transportation in the 1930s, a ticket was often something more — a coupon, a public service announcement, an ad, or even a small work of art. The Portland Traction Company (P.T. Co.) weekly pass allowed Portlanders to ride trolleys and buses multiple times for a small weekly price. The pass changed every week so that drivers could easily tell which ones were out of date. But from 1936 to 1939, passes contained unique and often elaborate designs that illustrated aspects of Portland life during the Great Depression. The Oregon Historical Society (OHS) Museum collection holds over 1,000 weekly passes spanning from the 1930s to 1940s, collected by Samuel Lewis Burnaugh (1876–1967), a state representative of Union and Wallowa Counties and later a Portland druggist. He donated the collection to the Horner Museum at Oregon State University, which was absorbed by the Benton County Historical Society in 2007 and the passes were transferred to OHS.

The Portland Traction Company, later Rose City Transit, operated public transportation in Portland and the surrounding communities. Most railways the company used had been constructed by predecessor companies, such as the East Side Railway Co., Oregon Water Power & Railway Company, and the Portland Electric Power Company (PEPCo, a name which the Portland Traction Company continued to go by for the remainder of its existence). The weekly pass, introduced on November 2, 1930, was part of the company's effort to increase ridership on the deteriorating electric streetcar system, which at the time received heavy public criticism and was falling into disuse due to competition from automobiles. Sales received a significant boost in 1938 with the installation of parking meters on downtown streets, and by 1940, the P.T. Co. sold 11,000 passes per week. When the weekly pass was discontinued in 1969, Rose City Transit experienced a sharp falloff in patronage. 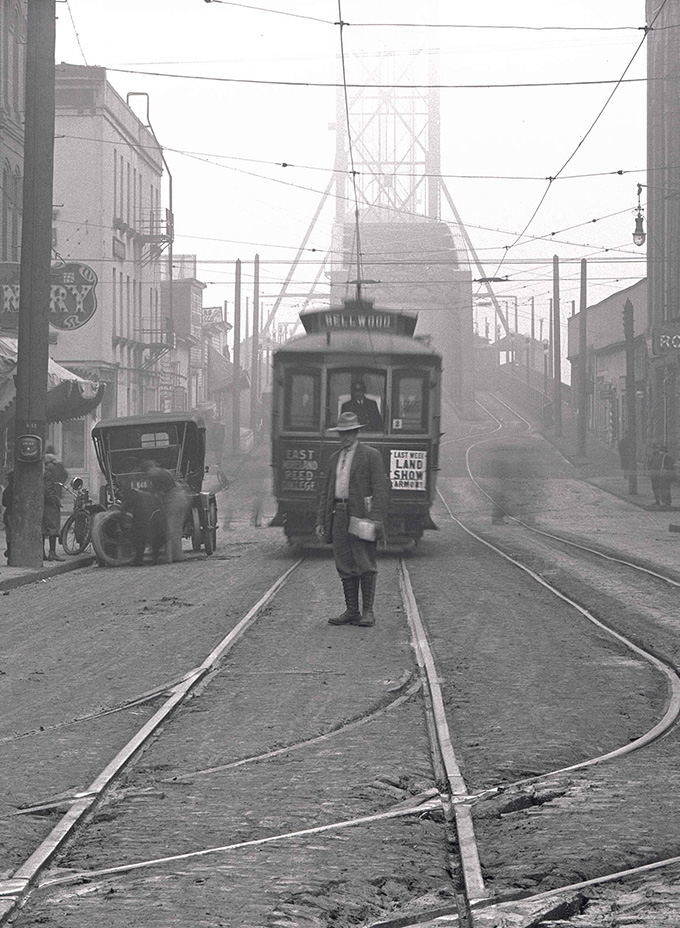 Only two artists are known to have signed their work on the P.T. Co. passes. Lawrence Russell Lewton (1912–1984) was a Portland commercial artist and illustrator whose name appears on transit passes dating to 1937. In the 1940s, Lewton was employed as an illustrator in the information division of the Bonneville Power Administration, alongside legendary photographer Minor White. Richard Lawlor (1911–2002) was a graphic artist who was born in Jacksonville, Oregon, and spent his career in Portland. He designed passes for P.T. Co. from approximately 1938 to 1939.  The OHS Research Library holds the Richard Lawlor papers, circa 1925–2002 (Coll. 757). We’re excited to share a few examples of the P.T. Co. passes held in the OHS Museum collection.

The first P.T. Co. weekly pass was colorful but basic, a motif that lasted until 1936, when designs grew more elaborate. Burnaugh’s collection includes nearly every pass issued from the first to the 1053rd (issued December 31, 1950), regardless of visual appeal.

The U.S. Battleship Oregon, which had gained national fame during the Spanish-American War (1898), was moored permanently in Portland as a floating landmark and military museum from 1925 to 1942. In 1938, when this pass was distributed, a fundraiser was underway to build a permanent mooring for the Oregon. The mooring was completed in 1939, and it seemed that the Battleship Oregon had indeed been saved — until the War Production Board claimed it for scrap during World War II. OHS acquired the Battleship Oregon Museum collection in 1959.

The Portland Traction Co.-operated Cazadero interurban rail line, now the Springwater Trail, carried Portlanders to the Multnomah County Fair in electric streetcars. The fair was held annually in Gresham from 1908 through 1969 on a fairground that included several exhibition halls, an outdoor stage, and temporary carnival rides as well as a racetrack that held Pari-Mutuel horse races as pictured on this pass.

Electrical Progress Week was a one-time event held over the week of August 24, 1936. Retailers across Portland participated in the event, organized by a retail merchants’ committee of the Portland Chamber of Commerce, and offered customers incentives to buy electrical appliances. The structure pictured on this pass is the River Mill Dam, also called Station M, a hydroelectric dam and powerhouse on the Clackamas River near Estacada.

The dedication of Timberline Lodge, a jewel of New Deal art and craftsmanship at the height of the Works Progress Administration’s activity, warranted a visit from President Franklin D. Roosevelt — but it took place in September, not June, of 1937. The June “dedication” was an open house preview for visitors to the mountain who had arrived for the Rose Festival-affiliated Winter Sports Carnival.

Passes such as this one advertised destinations to visit on P.T. Co. lines using simple but evocative artwork that made the most of a palette limited to four or fewer colors.

Citing the importance of winter sports to Portland tourism, Mayor Joseph K. Carson signed a proclamation designating a Winter Sports Week to coincide with a ski tournament and carnival that was to be held jointly between Portland and Government Camp. The Portland-based programming included a winter sports queen contest, indoor ski jumps, a style show, and a yodeling competition.

The artwork and inscription on this pass refer to a new fleet of “electric coaches” that replaced streetcar service on seven PEPCo routes. The city permit for one new route was contingent on public feedback after a 120-day trial period, so Portland Traction Co. used its passes to advertise the electric buses and boost public support for the project.

“Work to Buy, Buy to Work” was the title of a 10-day advertising campaign of Columbia Empire Industries, an association of businesses located in Oregon and Southwest Washington. The campaign framed its appeal to buy locally as a means of reducing unemployment, an argument that likely rang true in a region still attempting to shake the effects of the Great Depression.

For one week in July of 1938, Portlanders could register for free swimming lessons at Jantzen Beach Park by cutting out a coupon from the Oregonian and bringing it to a registration booth at the Meier & Frank department store — where they could also browse the latest in Jantzen brand swimwear.

This fire prevention public service announcement predates Smokey Bear but offers an early iteration of his message — that members of the public are responsible for preventing wildfires. The 1939 fire season was hot and dry, leading to fires across Oregon, including one in August that destroyed the Klamath County lumber town of Pine Ridge, which was never rebuilt.

For one week in March 1940, the Camp Fire Girls of Portland attended talks given by police officers, ski instructors, pastors, firefighters, and other local professionals exploring the theme of “skillful living.” The 28th anniversary of the Camp Fire Girls culminated in a Grand Council Fire held at the Public Auditorium (now the Keller Auditorium) that presumably did not involve an actual fire.

The P.T. Co. frequently used its passes as handbills for electric appliances, which boosted the revenue of its sister company, Portland General Electric (PGE), another subsidiary of PEPCO. “Tank patters” likely refers to owners of outdated water heaters who would pat the tank to see if it was hot before drawing water from it.

The poem printed on this pass gently encourages readers to choose public transit by pointing out a difficulty that may be familiar to Portland drivers in the present day.

The 31st annual Rose Festival opened on June 7, 1939, with a coronation at Multnomah Stadium followed by a riding exhibition by the 11th U.S. Cavalry, a performance by the American Legion drum and bugle corps, and a ballet, finishing with a pyrotechnic display. An estimated 250,000 spectators lined the route of the Grand Floral Parade two days later, which at seventy-two floats was (at the time) the longest in the history of the Rose Festival.

A series of passes in 1939 used pictures of animals and simple poems to advertise the Portland trolleys as safe, quiet, comfortable, and affordable.

Straw Hat Week was a promotional event orchestrated by the Retail Trade Bureau of Portland. Portlanders were encouraged to wear straw hats, and many retailers offered special deals for the week, including free hats for weekly pass holders who could match the number on their pass to numbers posted in store windows.

This unsigned pass uses simple artwork to evoke the pastoral beauty of the rural Willamette Valley.

The young woman pictured on this pass may be Frances Hulse of Grant High School, whose coronation as Rose Festival Queen opened the 1938 Rose Festival. That year marked the 100th anniversary of the first domestic rose arriving in Oregon in the Beers family’s covered wagon, the story of which was recounted by schoolchildren in a commemorative play in Laurelhurst Park.

The Stadium Philharmonic Orchestra, largely composed of musicians from the Portland Symphony, played summer concerts under the stars at Multnomah Stadium from 1936 to 1941. The concerts featured world-renowned visiting conductors and soloists and drew audiences of over 16,000. Programs mixed classical standards with new compositions and popular hits.

The third annual Western Safety Conference, called by Gov. Charles H. Martin, lasted for four days and covered safety topics for industry, traffic, home, and public. The conference opened with a “horror parade” showing accident-related deaths and injuries, which began at Portland Union Station and ended at the Masonic Temple, where the majority of sessions were held.

In 1936, Portland voters approved a 20-year franchise for the Portland Traction Company, allowing P.T. Co. buses and streetcars to traverse city streets and clearing the way for $3 million in improvements to the transit system. In exchange, the company promised to hire additional staff and to provide faster, more widespread service.

The third annual Portland Day drew 2,000 picnickers to the University of Portland campus in 1937. For years, the college had withstood bigoted legislative efforts at eliminating Catholic schools statewide, and the Portland Day picnics, which lasted into the 1950s, were a largely successful attempt to court public goodwill.

In Portland, Fire Prevention Week involved several days of demonstrations of firefighting and rescue techniques by the Portland Fire Department. Throughout the month of October, Portland and Seattle competed to have the lowest rate of fire damage. City leaders entreated Portlanders to do their part in preventing structure fires — if only to outdo Seattle.

A series of passes in 1937 illustrated scenes from Oregon’s history with brief explanations. Most depicted the settler era and celebrated the achievements of founders such as Joseph Meek and John Gant, while villainizing the Native Americans who resisted white settlement of their homelands.