Susie Shepherd (middle) came out as lesbian in the early 1970s and was a leader in lobbying the Oregon State Legislature to achieve equality for lesbian, gay, bisexual, and transgender communities. To her left is Don Weston and to her right is Dick Ferris, coach of the Lewis & Clark swim team. According to a photo caption published in the “Oregonian” on July 17, 1977, they are attending a Red Ryder benefit. OHS Research Library, Mss 2988-15, box 16, folder 10.

Sometimes when interviews grow long, great stories are buried alive under mountains of technical information, political drama, and judicial minutiae. Sometimes they’re sweet, sometimes they’re funny, and sometimes they’re terrifying. But all of them are worth a few minutes of your time. From the depths of the Oregon Historical Society research library’s oral history collections, Dear Oregon brings you a miniseries highlighting some of those hidden moments.

Today we are unearthing a story from Susie Shepherd, who described herself as an “old, old gay activist.” She came out as lesbian in the early 1970s and was heavily involved in lobbying the Oregon State Legislature on gay rights with the Portland Town Council.

The Gay and Lesbian Archives of the Pacific Northwest (GLAPN) honored Shepherd in 2012 as a Queer Hero NW for her dedication to civil rights for lesbians and gay men. You can read more about her story as well as the Portland Town Council on GLAPN’s Queer Heroes NW 2012 webpage.

The following excerpt (that we lightly edited for clarity) is a tale Shepherd told during an interview in 2000, conducted by Erin Sexton-Sayler and Jamie Walton (SR 4150, Tape 2, Side 1). Portland State University students conducted the interview in fall 2000 as part of the GLAPN capstone class with professor Ann Mussey. In the interview, Shepherd describes appearing on the KATU television show Town Hall in 1977 with her parents, Bill Shepherd and Ann Shepherd, where she came out as lesbian to a statewide audience. In the interview, Shepherd talks about Marilyn, who was her partner at that time.

Shepherd: And Town Hall decided to do a TV show on [House Bill 2627, the Gay Civil Rights Bill, which was being considered by the Oregon State Legislature at the time].

And Town Hall was a full hour then, and Gerry Pratt ran it. He was a local business finance kind of guy. Pretty conservative, but did a good job, usually, managing the crowds and stuff. So he called Jerry [Weller], and Jerry started lining up just the highest pistol people we [could] get. Stevie Remington, the executive director then of the Oregon ACLU [American Civil Liberties Union], who had been extremely invaluable to us in training us in lobbying technique and citizens lobby[ing] and that kind of stuff. Oh, and members of the task force, I mean really bright, articulate people who knew what they were talking about.

By then, I mean, the [Legislative] Guide [to Gay Rights], [published by the Portland Town Council] is out and it’s getting rave reviews, and I’m wishing I had my name on it, but I don’t. And Marilyn and I are just, I mean, things are just getting more and more difficult, because this has just become an absolute passion for me. And I get this call at the office on Thursday of that week, before the Town Hall show, from the gal who’s producing it saying, “Oh I just talked to your mother, and I’m so glad you and your dad and she are going to be on TV.”

And I didn’t want to say I’m with this closeted woman [Marilyn]. I said, “Well, because if I ever go back to teaching, I could lose my job.”

And she says, “Oh my God! I hope you’ll reconsider. Call me tomorrow. I’m going to save a spot for you. We really, really want you. I mean it’s really important that we have you and your mom and dad, and make that kind of a presence known.” And boy, I got thinking about that. 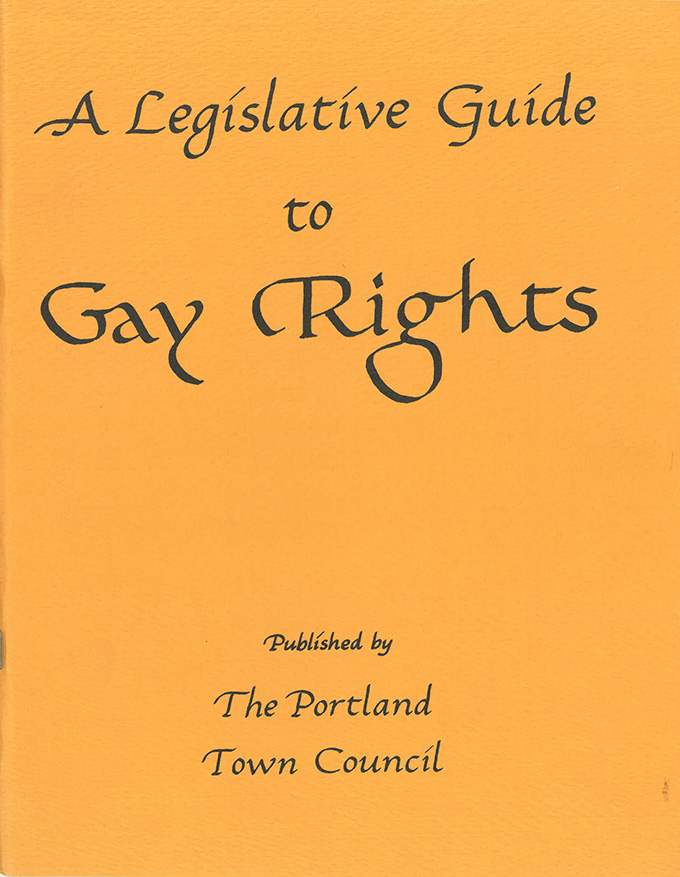 The Portland Town Council, founded in 1974, created “A Legislative Guide to Gay Rights” to educate policymakers on issues in the gay and lesbian communities. Susie Shepherd spearheaded the writing of this 76-page booklet, which sold out in LGBTQ bookstores across the United States. OHS Research Library, PAM 362.84 P852L 1976.

I went home, and I called my therapist that night, and I said, you know, “Marilyn’s always told me that if [I] go public this is it, but I just can’t let my people down at this point.” I said, “They need that family look, they really need it badly, and our family, right now, is the only one in Oregon who can give that.” And so I called Marilyn, and I said, “We need to talk. We need to talk really seriously.”

So we had breakfast the next morning and I told her. I said, “I’ve got to go on this show.”

And she burst into tears and said, “You know what this means for our relationship.”

And I said, “Yeah,” and I said, “I feel awful about it.” I said, “But if I do this, hopefully fewer people will have to go through what you’re going through.” I said, “It’s really about preventing this kind of grief for so many people.” I hoped she understood. I never knew, really, if she did or not. I mean, I knew intellectually [that] she did, but there’s a lot of distance between the heart and the head. I hated to have to do it, but I had to. I called the gal at the TV station, and I told her I was going to be on. And I didn’t tell anybody else because I thought, well, if I chicken out, I don’t want them to think I’m going to do it and then not show up.

So, I went on the show, and we had a PTC [Portland Town Council] Board meeting the next night, and I walked into it and people said, well, what happened to Marilyn? What happened to everything? And I said, well, I’m a single woman now. But it just — I’m so relieved, because mom and dad and I all spoke, and it was an unbelievably liberating thing.

That particular show won the Oregon Broadcasters Award in its category that year…. The tension in that room was palpable. It was unbelievably tense.

A funny thing that happened at that story was that one of [the] people who spoke was Dick Ferris, who was the coach of the Lewis & Clark swim team, and he hadn’t come out publicly before. What nobody knew at the time was that there’s another professor at Lewis & Clark whose name was also Dick Ferris. He started getting phone calls within hours of Town Hall being on saying, “Professor Ferris, we didn’t know that you were gay.”

But Lewis & Clark was great, they took good care of Dick; he didn’t lose his job or anything, but it was a hilarious side thing that happened with all of that. I mean, it was just a scream.

But that show changed people’s lives.

More of Susie Shepherd’s interview can be found online on OHS Digital Collections.

Copyright for this interview is held by the Oregon Historical Society. Use is allowed according to the following statement: Creative Commons — BY-NC-SA.