This display case in “Experience Oregon” highlights Native belongings, some of which have been recently replaced for preservation reasons. Photo by Evan Kierstead.

The Oregon Historical Society (OHS) is dedicated to preserving the tangible forms of Oregon’s collective memory and making them accessible. Occasionally, those two objectives contradict — displaying an object or making it available for research may cause wear or damage. OHS collections staff are trained in preventative conservation measures and work to mitigate these risks. For instance, every year we switch the dress made by M & A Shogren that is on display in OHS’s cornerstone exhibition, Experience Oregon. The Shogren dresses tend to be very fragile, with an abundance of materials such as silk, lace, and beading that are prone to deterioration. This was a conservation decision that we built into the design of the exhibition.

In spring 2022, museum staff switched out numerous other textiles and objects in Experience Oregon that are prone to fading. The reason for doing so is the same; some objects, especially textiles, are vulnerable to damage while on long-term display. Light exposure is primarily the culprit, although there are certainly other factors to consider, such as dust accumulation or the effects of gravity on objects held on mounts. Replacing some of these objects is a challenging exercise; the new objects have to both fit the themes of the exhibition and the space vacated by the removed object. They also must be robust enough to withstand a year or two of display. After a lot of planning, we made the changes in June 2022, and we’re highlighting a few here — plan a visit to Experience Oregon to find the others! Can you spot the differences?

The First U.S. Flag in Oregon?

Slide the arrow to the left and right to see if you can you spot the difference in these two images of a case displaying objects relating to Oregon’s statehood. Photos by Evan Kierstead.

In the lower left corner of each photograph, you will notice that a flag has been replaced. In the left photograph is a guidon from the 1st Oregon Volunteer Cavalry, which was on display from 2019, when the exhibition opened, to 2022. Currently on display is a small silk flag, which I describe in more detail below.

There are a few flags that could be claimed as the first in Oregon, depending on the definition of “first” and “Oregon.” Pacific University’s museum holds a flag in its collection that was sewn in 1855 and was designed by the first president of the university, Sidney Harper Marsh, and one of its founders, Tabitha Moffat Brown. The flag has 20 stars arranged in a star pattern. It is believed to be the first U.S. flag sewn in the Oregon Territory, as it predates Oregon Statehood.

Another contender is the Bills Flag, part of OHS’s museum collection. The flag was sewn in Portland in 1861 by Ann Bills, who was married to Cincinnati Bills, founder of the Oregon Transfer Company. The story behind the flag is that an employee of Cincinnati’s became “anxious to see an American flag raised in Portland” to celebrate July 4th and helped Ann secure the materials to make it. It is a substantial flag, measuring 9 feet by 6 feet. It has 34 stars because in 1861 Kansas became the 34th state to join the union. It certainly seems to be the first flag that we know of that was intentionally sewn in Oregon for such a purpose. This flag has been on temporary display in the pavilion at OHS a number of times, most recently for the July 4th weekend in 2022.

On display now in Experience Oregon is this small silk flag, created chronologically between Pacific University’s flag and the Bills flag, which may actually be the first U.S. flag in Oregon. It is a 33-star flag, with the 33rd star added after Oregon was admitted to the union. Mary Frances Hoyt, daughter of pioneer and Capt. Richard Hoyt, carried it in a parade in Portland in 1859 when she was three years old. Happily, it is exactly the right size for the case, and fits the theme of statehood perfectly! 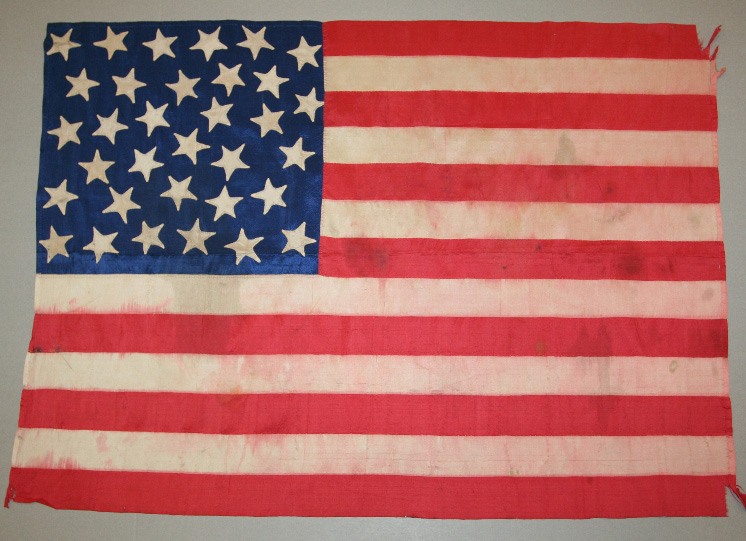 This handmade silk flag may be the first U.S. flag in Oregon. OHS Museum, 68-305.
Can you spot the difference in these two images of a case that displays uniforms of Oregonians who participated in World War I and World War II? Photos by Evan Kierstead.

In the foreground of each photo, behind the large text panel, we have replaced a uniform. In the left photograph is a uniform worn by Mildred Scott when she served in the Women’s U.S. Marine Corps Reserves in World War II, which was on display from 2019 to 2022. The new uniform is a flight suit, also from World War II. 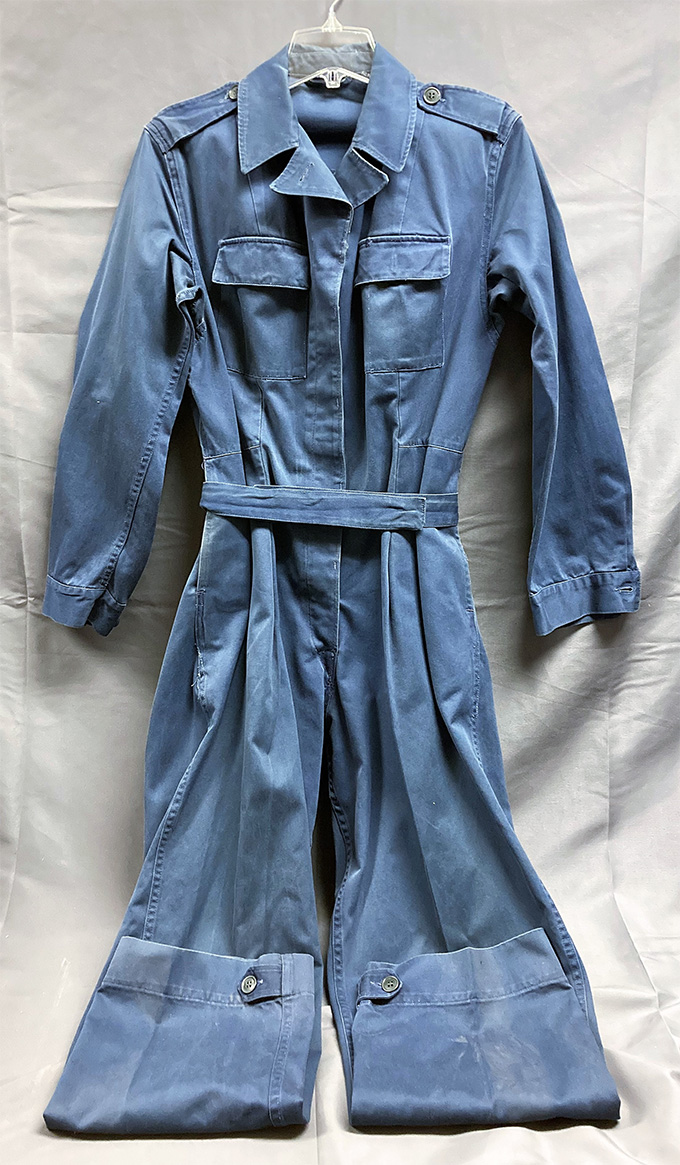 This flight suit, now on display in “Experience Oregon,” belonged to Alta Corbett when she served with the Women Air Service Pilots (WASPS) during World War II. OHS Museum, 96-89.1.

This flight suit that is now on display was worn by Alta Corbett (Thomas) when she served with the Women Air Service Pilots (WASPS) during World War II. She belonged to the Tow Target Squadrons at Camp Davis Army Airfield in North Carolina and Liberty Field in Hinesville, Georgia, where she towed targets for practicing. These squadrons towed targets for practicing artillery troops using live ammunition. Born in Portland in 1918, Corbett was a member of the notable Corbett family, the daughter of Elliott Ruggles Corbett and Alta Smith. Showing an early adventurous streak, she made solo summits of Mounts Rainier, Hood, Adams, St. Helens, and the Three Sisters in her twenties. She later moved to Alaska, where she met her husband Ralph Thomas, and finally to Sequim, Washington.

Despite the huge contribution that the WASPS made to the war effort, they were left at the end of World War II with no military standing. This was finally rectified in 1977, when they were granted veteran status, and then in 2009, they were awarded the Congressional Gold Medal. Corbett was then 92 years old but made the trip to Washington, D.C., to receive her medal. I’m delighted that the need to rotate our textile pieces in Experience Oregon gives us the opportunity to showcase wonderful stories like these.

Can you spot the difference in these two images of displays that highlight modern stories in Oregon history? Photos by Andie Petkus (left) and Evan Kierstead (right).

At the far left of each of the images above, you’ll see that a t-shirt has been replaced. The t-shirt in the left image commemorates the eruption of Mount St. Helens in 1980 and was on display from 2019 to 2022. Now on display is a green t-shirt that highlights the rise and fall of Rajneeshpuram, a religious intentional community built during the 1980s. Changing out some of the objects above the timeline in the final area of Experience Oregon gave us the perfect opportunity to feature items that belonged to Rajneeshees.

While OHS’s research library holds hundreds of hours of archival footage related to Rajneeshpuram, some of which were featured in the Netflix documentary Wild Wild Country, the museum collection has only a few objects from this tumultuous time in Oregon history. The bright green anti-Rajneeshee t-shirt is a favorite of mine, but it requires a little background information to fully understand. Between 1981 and 1985, thousands of followers of Bhagwan Shree Rajneesh purchased land in Wasco County, Oregon, and later took over the town of Antelope. The large blood splatter over the town of Antelope and the smaller one over Portland (the Rajneeshees bought a hotel there) represent the perceived threat of their spreading influence. The red color also mirrors the red clothing that the Rajneeshees typically wore. The “Keep Oregon Green” slogan appears to simply refer to the long-standing association for wildfire prevention, until you realize the meaning behind the blood-splatter imagery. 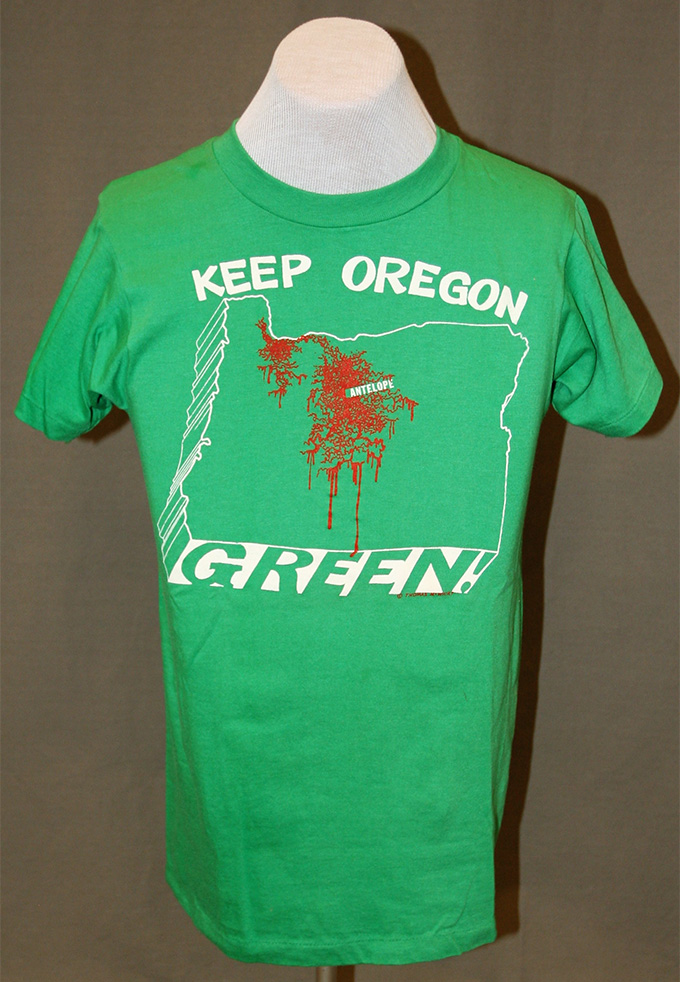 This “Keep Oregon Green!” t-shirt is one of several new objects on display in OHS’s “Experience Oregon” exhibition. OHS Museum, 92-75.1.

Visitors may also notice that other objects in these photographs have been replaced, beyond what has been highlighted here. There are more new objects on the wall alongside the Rajneeshee items, other uniforms in the World Wars case, and other new objects scattered throughout Experience Oregon. One object to look out for is this pinafore, which is now on display in the Oregon Trail section. We’d love for you to come and see these new objects up close, and see what else you can find that has changed since you last visited.All the current and former objects from Experience Oregon are available to view on the Museum Collection Portal, so check that out for more information. And these changes won’t be the last! OHS museum staff plan to replace some of these newer additions within a couple of years, and as always, there will be a new Shogren dress to enjoy in February 2023.