Home Blog Santaland at the Museum

When the downtown Macy’s department store closed in 2017, OHS had the opportunity to add items from the popular Meier & Frank Santaland attraction to its prop collection and begin a new holiday tradition: Santaland at the Oregon Historical Society. Pictured here is the 2018 display, complete with Santa’s chair and footstool, three hardworking elves, Rudolph, and a scale model of the monorail that once carried young children through Santa’s workshop in the historic department store. Photo by Rachel Randles.

When the Macy’s department store in downtown Portland (previously the Oregon-grown retail giant, Meier & Frank) closed in 2017, Macy’s contacted the Oregon Historical Society (OHS) to see if we wanted to help preserve any of the original Meier & Frank Santaland props and animatronics. Having moved to Oregon in 1992, I was not familiar with the whole Santaland magic and so was thrilled when I first entered the ninth floor of the building and walked into the proverbial winter wonderland that had enchanted children — and a few adults — for all the years that this Portland icon was in operation. 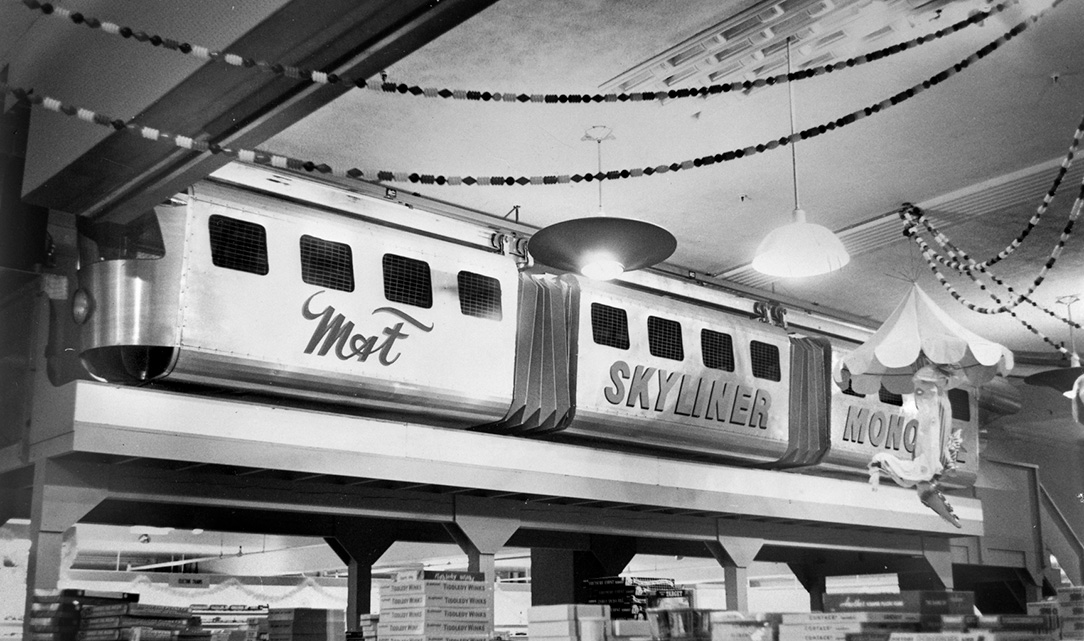 The biggest problem our museum team faced was deciding what we could accept and what to do with it once it was in our care. We ultimately decided to rescue Rudolph (our obvious first choice), three of the hardest working animatronic elves, a handful of traditionally decorated green artificial Christmas trees, a selection of giant wreaths adorned with ornaments, and a few white-flocked trees with lights. Santa’s red velvet and gold-gilded “throne” and footstool was another must-have, as was a scale model of the actual monorail that generations of children rode in above the store’s crowded floor when the room opened each holiday season. Several years prior to this acquisition, OHS had also received a donation of one of the actual once-operational monorail cars — but that’s another story for another time.

Once these objects were in our care, we decided an installation was in order to keep this beloved tradition alive. Our museum director assigned me to lead the charge, tasking me with imagining the best way to display our newfound treasures. I busied myself with recreating a scaled-down version of Santa’s workshop, replete with the aforementioned elves toiling away at fabricating toys and decorating the tree with lights, with Rudolph nodding in approval. We also included Santa’s throne as part of the exhibit, used for those special occasions when he was able to stop by and greet visitors of all ages. 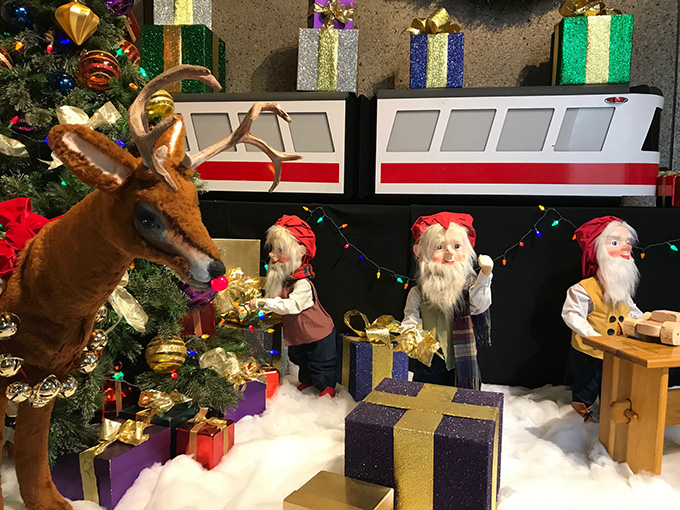 Rudolph and three animatronic elves greet visitors to OHS’s Santaland display each year. In 2018, the elves busied themselves in our mini winter wonderland by decorating the Christmas tree, wrapping gifts, and building toys. Photo by Rachel Randles.

Even the hardest working members of Santa’s workshop need a bit of TLC from time to time. In 2018, Franc performed “surgery” on Rudolph when his animatronics stopped working. Fortunately, Rudolph was able to return to his post in 2018. Photos by Franc Gigante.

My own understanding is that the animatronic characters on display in Santaland have been operating from at least the mid-1960s. Inevitably, some of them started to show their age and breakdowns occurred over time, leaving me to do some repair work. The first casualty was Rudolph, which tragically stopped working the first year of the OHS Santaland installation. Once the exhibit closed, I carefully performed “surgery” on him before the following season’s debut; fortunately, I was able to successfully revive the red-nosed reindeer. Last winter, one of the elves broke down, again putting my animatronic surgical skills to the test. I am pleased to report that after a successful procedure this fall, he is once again ready to report for work in Santa’s workshop.

Over the years since OHS re-ignited this whimsical holiday tradition, we have had the opportunity to add a few surprises to the installation. If you are an annual visitor to OHS’s Santaland, you may have noticed one of our elves progressively constructing a wooden toy truck, building it with a hammer one year then painting it green the next. We have also illuminated the interior of the monorail model as well as added a picture window with an image from OHS’s research library collections that gives the illusion of children outside decorating a living tree. 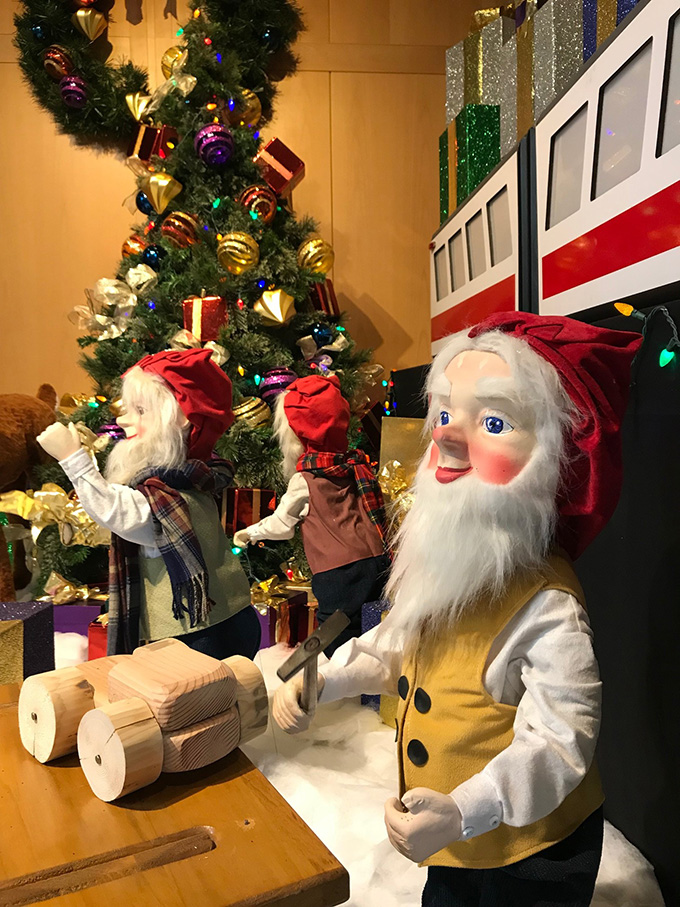 One of Franc’s favorite parts about putting together OHS’s Santaland display is adding in little “Easter eggs” for annual visitors. Astute visitors may have noticed the evolution of one of the Santaland elves, who each year adds a new step in building this toy car. Pictured here in 2018, the elf is hammering away at a toy car. Photo by Rachel Randles.

While we are unable to welcome visitors to Santaland at the Oregon Historical Society this year, due to our current museum closure during the COVID-19 global pandemic, I look forward to next year’s installation and am already planning a few new embellishments. You will all just have to wait and see what we have in store…

Until then, we invite you to virtually “visit” Santaland through this short video trailer that was created by OHS Web Strategist Jay Cosnett in 2018.