Home Blog Reflecting on the Oregon Story: Maurine Neuberger and the Margarine Mayhem

Employees at a Thriftway grocery store stand next to a stack of Nucoa brand margarine packages between 1933 and 1941 during a “10,000 pound sale.” Nucoa advertised its product as a “thrift spread for bread,” touting the addition of Vitamin A in its budget-friendly butter alternative. Between 1915 and 1951, Oregon retailers could only sell margarine  in its natural form, a white-colored paste. Users, mainly women, would tint the spread with yellow powder to give it a more appealing appearance. OHS Research Library, Oregon Journal Negative Collection, Org. Lot 1368, box 372, 372A0983

Oregon Historical Society (OHS) Research Library staff are nearing the completion of an ambitious year-long oral history digitization project to make over 212 oral history interviews of significant legal and political figures publicly accessible. In June 2019, Oral History Librarian Sarah Stroman described the project scope, and in November 2019, oral history indexers Sara Paulson and Cynthia Lopez reflected on their work to make the recordings more accessible to researchers through indexes. This third post in a four-part series explores one of the many stories documented in the over 1,800 hours of recorded sound and video spanning the years from 1958 to 2011 — the Great Oregon Margarine Debate.

The grande battaille that was the Great Oregon Margarine Debate of 1951 is lightly remembered by first-guard oleo (or margarine) veterans; it has become a mere wisp of former outrages and minor inconveniences long past. The details of the skirmish are absent from textbooks, failing to earn even a tallow-colored sidebar in the left-of-gutter column abutting the section on mid-century pasturage. As such, few children know about the fracas over whitish vegetable/soy spread and how the butter-loving dairy industry took on a defiant wave of frugal housewives — and lost.

Perhaps the person most associated with the margarine mayhem is Maurine Neuberger, who at the time was a state representative. Her husband Richard Neuberger was in the state senate — at the exact same time. Richard had co-sponsored a bill to repeal the ban on pre-colored margarine, which had been the law of Oregon’s land since 1915. The pale oleo, with its cheap vegetable-fat ingredients, had been breathing down butter’s throat since 1869. The “antioleo” crowd had worked hard for decades to keep it out of restaurants, burden it with taxes, and make sure it hit grocery shelves in its virginal form — a pale, sickly white that invoked a post-winter gathering of an Oregon white-guy bathing club. The argument: margarine was not butter, so it should not to pretend to be. It needed to stay in its lane.

As a result, grocers sold margarine with packets of yellow powder, which could be added before serving the interloping spread to naïve family members. It was tedious, ridiculous work, and women — relegated to such tasks for millennia — put their collective foot down. 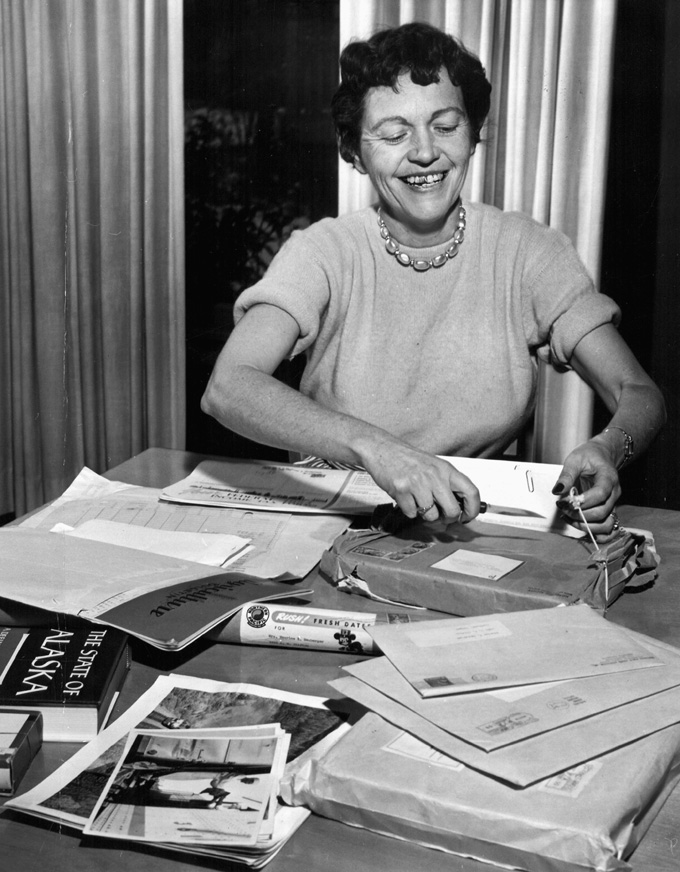 During the legislative committee debate over repealing the ban on pre-colored margarine, Senator Neuberger asked then Rep. Neuberger to provide a show-and-tell. Invested in shepherding the bill through the Oregon House, on January 30, 1951, Maurine donned an apron and mixed the heck out of that margarine, transforming it from whitish to yellowish in several long, heart-pounding minutes. She wiped the sweat from her brow and explained: “I don’t really like the stuff very well…but I have a very limited household budget and have to use it.” Even though the committeemen watched “with great interest,” they were unmoved by the up-close look at the tedium of household labor. They recommended a “do not pass.” It took another two months of failure — and an embarrassing attempt by a legislative aide to bribe legislators with oleo-laced cupcakes — before the legislature repealed the ban on March 20, 1951. By then, the Neubergers’ bill had been scrapped and replaced by a similar one, with a new sponsor, and was surrounded in caveats about how restaurant margarine had to be triangular instead of rectangular and could be yellow but not “butter-yellow.” Restaurants were required to post warning signs: “It’s not butter.” 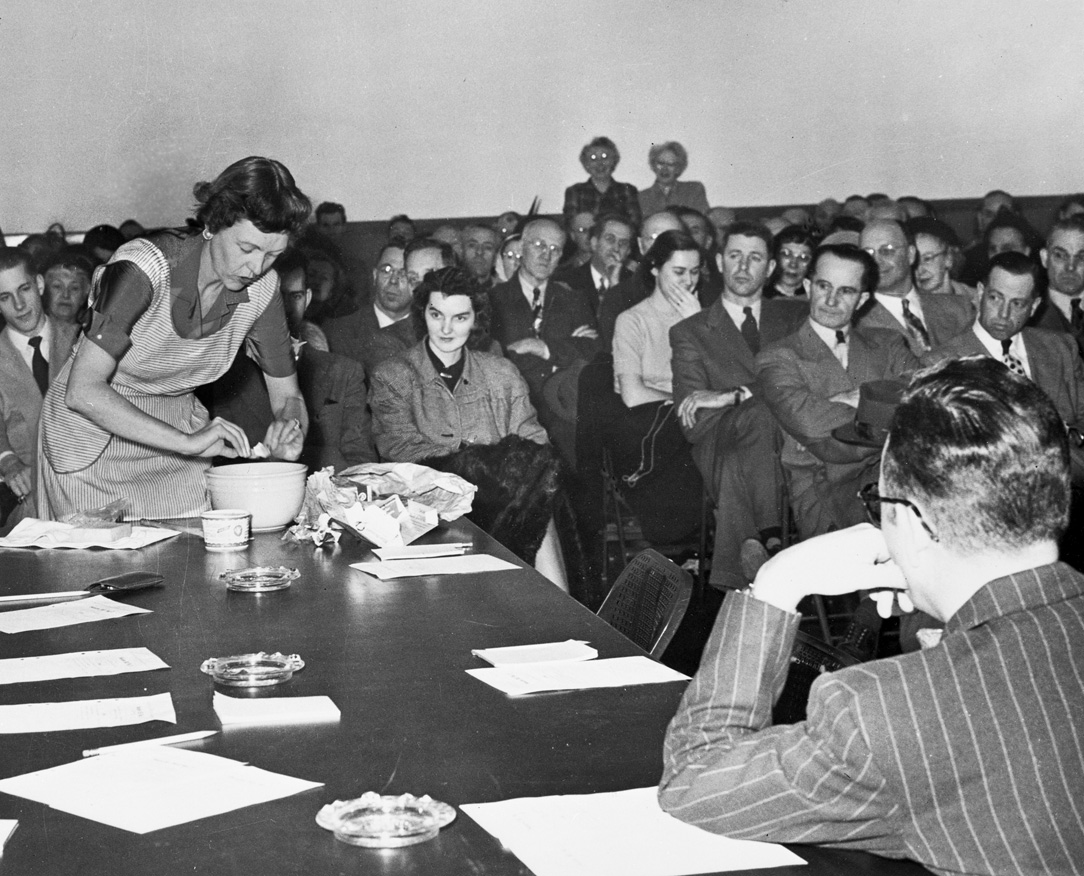 At a State Senate committee hearing on January 30, 1951, Rep. Maurine Neuberger demonstrates for legislators the work of mixing color into white oleo in an effort to win votes for a bill that would overturn the ban on pre-colored margarine. At the hearing, Neuberger declared, “I don’t really like the stuff very well…but I have a very limited household budget and have to use it.” OHS Research Library, bb06734

The food-coloring demonstration appears to have had little impact on the legislative victory, but it did become a defining moment in the public’s memory of Maurine Neuberger. Those few moments followed her in the Oregon legislature, the U.S. Senate, her interviews and press coverage, and her obituary in 2000.

In Neuberger’s 1991 oral history, recently digitized by the OHS Research Library as part of its LSTA “Digitizing the Oregon Story” grant project, her discussion of the margarine-mixing affair is over within a few turns of the recording tape. Senator Neuberger was a busy woman and had a big story to tell. Her characterization of the margarine ban as a consumer issue rather than an industry protection one is immediately apparent, and so it becomes part of a grand portfolio of consumer-based politicking by a woman speaking directly to her dedication to equity in the home and workplace, adequate funding and availability of education, and fair wages for the working class.

The difference between reading about someone and hearing from them directly creates a tension in public memory, which in Neuberger’s case is highly gendered. It is a good tension, which releases our hold on the “pleasing” aproned woman wielding a mixing spoon in the capitol and re-places her with a capable political leader forcing her male colleagues to face the absurd consequences of simple-minded solutions to market competition. If you look past the mixing bowl, you can see her brilliant post-loss tactic to bring the matter to popular vote through the initiative system, forcing the dairy industry to reconsider its implementation of butter “color spectrums” and crippling consumer taxes. In Neuberger’s oral history, she stands in for herself and characterizes her own strategies and victories without having to fight through the lens of male colleagues or observers.

“Well, I would say that a good many times it [an issue] comes from the people to me. Legislators are accused of not leading, but following, and some of those issues are examples. The people come and — I’d never bought a pound of margarine in my life — and people came and said, ‘Why shouldn’t we be able to have colored margarine….it seemed like they were right, so we followed through on that’.” 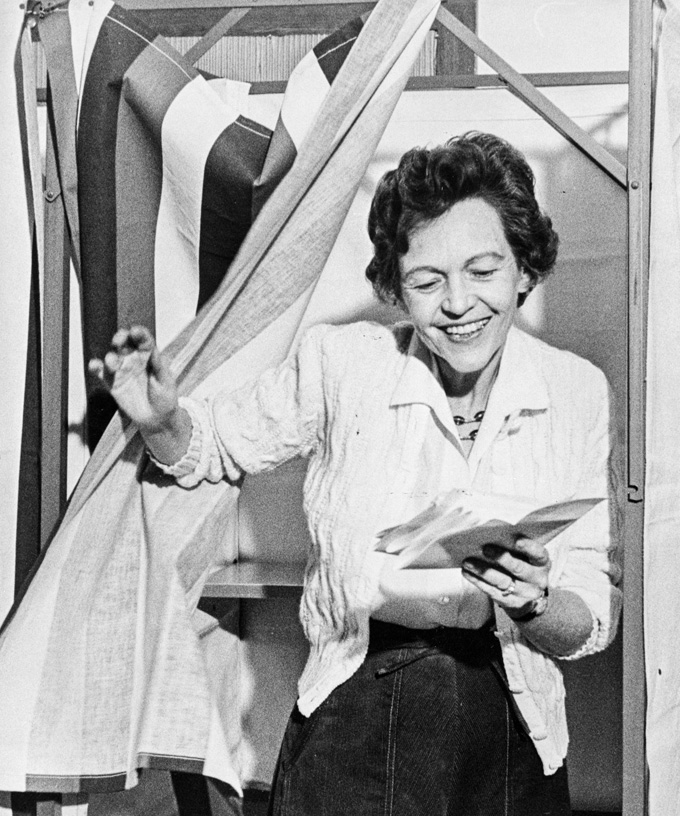 Maurine Neuberger votes on November 8, 1960, when she ran for U.S. Senator — a post held by her late husband, Richard Neuberger. She won the election and served as Senator from 1960 to 1967, a position that no other women has held in Oregon. OHS Research Library, CN 013529

The direct, digital access to the oral histories of significant Oregonians in politics helps us understand more accurately the ways our state’s political leaders have influenced state government. Agree or disagree with their worldviews and tactics, the system makes more sense when the people who built it have the opportunity to explain themselves.

And you may better enjoy your pre-colored yellowish vegetable fat now that you know what it took to get it.

Someone (probably a butter advocate making sure that no one was poisoned) asked Rep. Maurine Neuberger what happened to the bowlful of oleo she colored at the hearing on January 30, 1951.  She said: “Why, I sent it to the senate lounge and the senators ate it on their sandwiches today.” 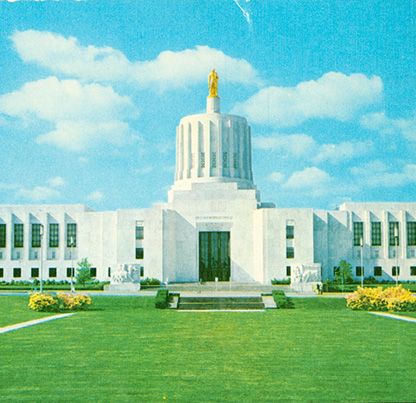