In this 1857 photograph of Portland, “Stumptown,” tree stumps are visible just at the edge of town.

“The early settlers of Portland — to use an expression of Judge Tourgee’s — ‘squatted hard’ and struggled mightily against the environment of fir trees.”

— Harvey Scott, editor of the Oregonian.

In the History of Portland, published in 1890, author Harvey Scott describes American cities with reductive mundanity: “A city here is but a spot where population is more dense than elsewhere.”

By this measure, Portland is a mighty beast of a Northwest city, with 600,000 residents clogging the bridges and overflowing the sewers. The next most populous city in Oregon — Salem — lags behind, at a mere 165,000, or so.

Scott’s 700-page history describes the many reasons an emigrating swarm of non-Native people settled in Portland during the nineteenth century, like a “moving crowd on the street…press[ing] as near as possible to the scene of an accident.” As he says, “[T]he purpose to live in a certain municipality may, in many cases, spring from sordidness,” a prophetic look forward, perhaps, to the city’s many strip clubs, bars, and naked bike rides. But such things do not sustain a person forever.

What is Portland’s secret to smug overpopulation?

A geographical honey trap, Portland rests in a happy nexus of topological bounty, drawing in people like a barker on a midway. After tediously measuring distances to other major towns and cities, the flow of rivers, and the arrangement of railway lines, Scott concluded that “Portland is laid out by nature on a scale commensurate with the geographical environment of which she is the center.” Our self-satisfaction comes to us honestly. As for the ever-looming threat of Seattle up north? Scott turns to science to reassure Portlanders of their inevitable superiority: “It is simply a principle of physics that any body, whether a ball or a train of cars, will roll most readily down an inclined plane, and the friction or traction is increased by the attempt to go up hill.” Seattle is north, and north is “up,” as any geographer knows. Plus, Portland spends a few days each year clearing the Willamette of human sewage — it is a low hell. As the giant rat-like Nutria who paddle the ways and byways of the Willamette and its tributaries will tell you, Portland is, indeed, the settlement of least resistance.

For a more measured (and accurate) history of Portland, I invite you to browse The Oregon Encyclopedia (OE) and the OHS Research Library's award-winning Oregon History Project (OHP), sites that have been publishing authoritative Oregon history for over a decade, free to the public. We work with historians, scholars, educators, and local experts to provide comprehensive and accessibly brief entries on significant people, places, events, and biota in the state, and we illustrate those entries with images and documents from the OHS Research Library and our archival project partners.

The OE and OHP contain over 1,000 entries on Portland-related topics, so we created an online exhibit, Portland: A Lot of People Have Lived Here. The exhibit includes a link to an interactive history map called the Oregon History Wayfinder, navigable on mobile devices, with links to the OHP and its trove of digitized archival materials.

Portland is as beautiful and interesting as it was when Harvey Scott wrote his exuberant history, and we are fortunate to live in a place where that history is observable on the landscape and in the built environment. Please, enjoy your stay. Exits are to the north, south, and east, with wind and hypothermic waters to the west.

First stanza from the “Beautiful Willamette,”
by Samuel L. Simpson, 1868

A crowd gathers at the Burnside Bridge dedication ceremony in 1926. This was also good practice for coming to a standstill at a mid-block Portland crosswalk.
Oregon Journal Negative Collection; Org. Lot 1368; Box 371; 0371N3006

We really are awesome. Portland celebrates the Trailblazers’ 1977 championship with a parade.
bb000870

In Portland, we smile when we feel like it. Welding champions of the Kaiser Swan Island shipyard and J.A. Jones Construction pose for a photo in 1944.
Oregon Journal Collection, catalog no. 000829 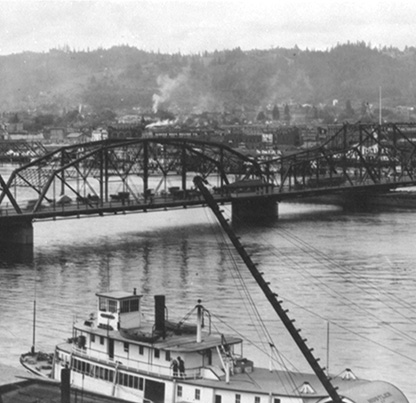 Portland, with a 2010 population of 583,776 within its city limits and 2,226,009 in the seven-county metropolitan area, was platted on the west bank of the Willamette River in 1845 on lands utilized by the Multnomah Chinooks. The area received its first few dozen English-speaking settlers in 1846. Maine native Francis Pettygrove, one of its first proprietors, chose the name. During the 1850s, Portland would pass...