Home Blog A Pedal-Powered Addition to the OHS Museum Collection

The Oregon Historical Society’s museum receives many kind and generous offers of object donations from the community. The most common offerings include furniture (such as chairs and dressers); footlockers or trunks; period clothing; and pianos and organs. Recently, Boaz Frankel, together with Phillip Matthew Ross, donated a unique, contemporary object — a very special cargo bicycle that carried them around Oregon and beyond.

In late 2011, Frankel and Ross were inspired to create a bicycle television show. Not a show about bicycles — rather a talk show style program filmed on a bike. And so, the Pedal Powered Talk Show began. Ross, who founded Metrofiets, a Portland-based company that crafted cargo bikes, created a custom cargo bicycle featuring a large wooden box (or basket) at the front end of the bicycle, with a wooden seat and hinged lid built in. The box served as Frankel’s desk, from which he conducted interviews. The bicycle is large and heavy — the frame is made of aircraft-grade steel, measures eight feet in length, and weighs around one hundred pounds. 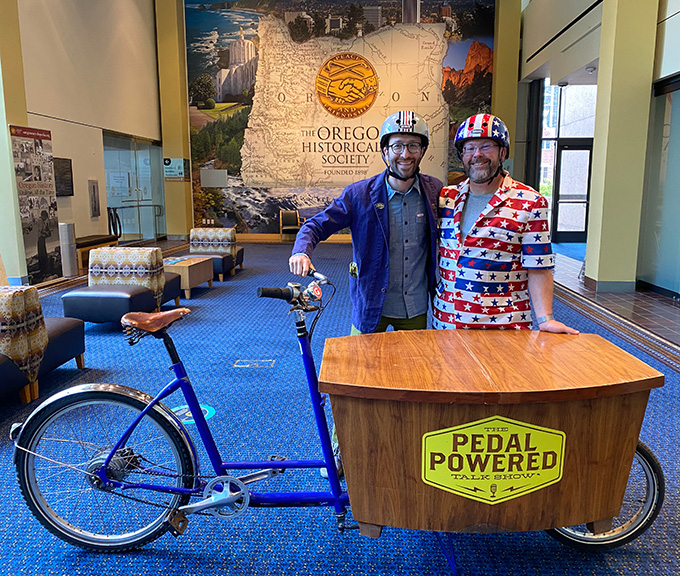 Boaz Frankel (left) and Phillip Michael Ross pose with the Pedal Powered Talk Show bike in the OHS pavilion. Despite its size, and the fact that the frame is constructed out of aircraft-grade steel weighing one hundred pounds, Ross is able to ride it around with ease.

Despite the size, Ross pedals the bicycle with apparent ease. With him at the helm, the duo rode to interview various people around Oregon and beyond. Over the course of several years, they completed more than 60 episodes and had guests such as the cast of the Portland-based television show Grimm, Pink Martini’s Thomas Lauderdale, Portland’s Unipiper, and beloved drag queen Darcelle XV. In addition to Oregon-based interviewees, they also talked to actor Ed Begley, Jr., and writer/director/actor David Wain (a personal favorite). They even took the Pedal Powered Talk Show outside of the state, filming at such destinations as the top of Seattle’s Space Needle (during which the bicycle received some historic damage trying to fit it in the elevator!); Mount Rushmore in South Dakota (which required special permission from park rangers!); and Wildlife Safari in Winston, Oregon (which also resulted in some scratches on the desk — from a cheetah!).

Frankel and Ross moved on to other ventures in 2016. Ross works at B-line, a trike-and-truck urban delivery company. Frankel relocated to Pittsburgh, Pennsylvania, and just opened his newly renovated kazoo museum in South Carolina. So, they offered the bicycle to OHS, to preserve as an interesting part of Oregon’s history — representing the love of the people and places in Oregon. A guest book that the interviewees signed and the Ask-o-Matic, a random question generator made by Davit Butts of Mad Dog Garage, were also donated. 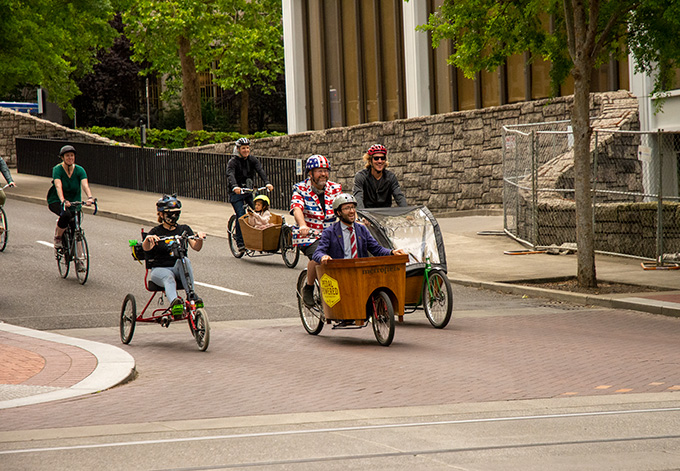 In June 2021, Frankel and Ross transferred the bicycle to OHS, but not without a proper send-off. They, along with friends, former crew from the web-based series, and OHS staff members, met on a pleasant Portland summer day for one last bike ride around the Portland waterfront. It was fun, it was merry, and it was recorded for a final Pedal Powered Talk Show goodbye, and you can enjoy watching it now (sung to the tune of the show’s super-catchy theme song, by Aika Music). Enjoy!