Portland-based Sawyer’s Inc. first introduced the View-Master stereoscopic viewer at the 1939 World’s Fair, and it was an instant hit. This model from about 1955 is on view in the Oregon Historical Society’s permanent exhibit, “Experience Oregon.” OHS Museum, 76-55.5.1-.3

While navigating the many challenges of the current COVID-19 stay at home orders, I’ve often wondered how Americans fared during quarantines of the 1918 influenza pandemic — a time before radios became commercially popular and modern luxuries such as video games, the Internet, and television did not exist. Certainly, people must have similarly searched for ways to pass the time and lighten the mood during such a difficult situation. As Curator of Exhibitions and Special Projects at the Oregon Historical Society (OHS), I have the privilege of working closely with the OHS Museum collection, which helps shed some light on objects of entertainment from the past.

Finding ways to stay informed and while-away the hours over 100 years ago likely involved the stereoscope, which could be found in many American households by the mid nineteenth century. Viewers would look through two lenses, one for each eye, to view a card with two identical images. The two images would appear combined, creating the illusion of one larger, three-dimensional image. Tourists often purchased stereograph cards as souvenirs to remember vacation locales, and people could buy cards as a way to experience far-off lands that they might never have the chance to visit in person. Stereoscopes continued to be popular into the early twentieth century. It’s not difficult to imagine quarantining during the 1918 influenza pandemic, yearning for an escape, while using a stereoscope in the same way the Internet currently provides forms of virtual tourism. 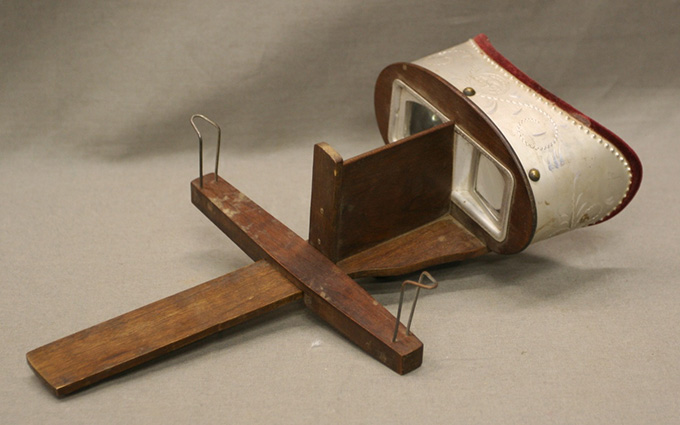 This typical early twentieth century stereoscope is from 1904 and is held in the OHS Museum collection. OHS Museum, 2008-51.1 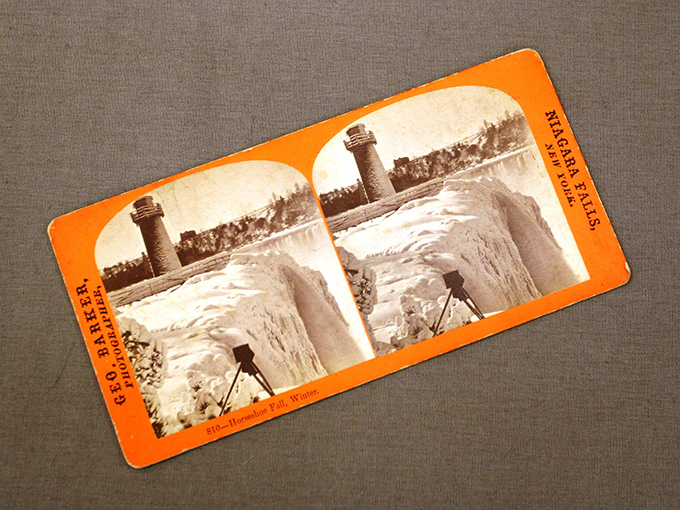 Stereoscopes also have a close connection to Oregon history. In 1919, Edwin Eugene Mayer had just returned to Oregon from military service in World War I and was working as a pharmacist at Owl Drug in downtown Portland. While looking for new business opportunities, he decided to buy into a local company called Sawyer’s Photo Finishing Services with the help of some family members. By the late 1920s, Sawyer’s had become the largest producer of stereograph scenic cards in the nation. The sepia scenic cards were viewed on stereoscopes, which were large and clunky, and the images had to be swapped out individually, leading Mayer and Sawyer’s company president, Harold Graves, to think about ways to improve the technology.

Inspiration came in 1938, when Graves met photographer William Gruber while vacationing at Oregon Caves. Gruber was taking photographs with two cameras taped together and Graves inquired about the contraption. Gruber explained that he was attempting to find a new way to create stereograph images and described a machine he had invented using multiple stereograph images on a small viewing reel. The invention also incorporated the newly developed Kodachrome color photography. Gruber and Graves met with Mayer soon after the chance encounter and the three men formed a partnership. They began development work on the new invention, and Mayer came up with a name: View-Master. Sawyer’s introduced the device at the 1939 World’s Fair and it was an immediate hit. The U.S. military even ordered 100,000 viewers to use for training during World War II. Early subjects of the reels were mainly tourist destinations such as the Grand Canyon and Carlsbad Caverns, and adults were the main audience for the device. 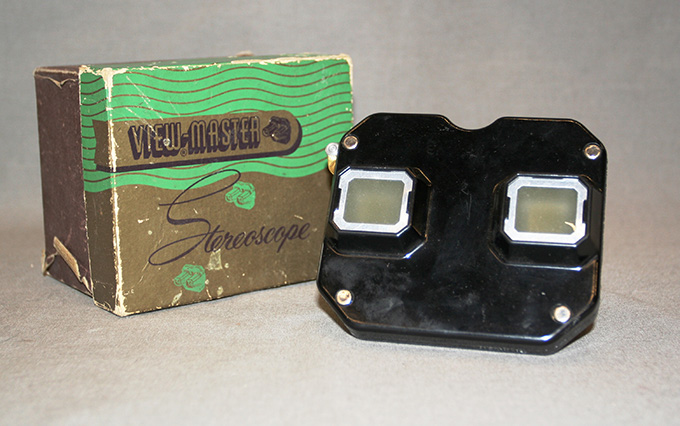 As the company expanded, Sawyer’s soon purchased a new Art Deco building at 735 SW 20th Place in Portland, Oregon, which they used as their offices and production facility. As the popularity of View-Master increased, the space soon became too small and, in 1951, it moved to a larger factory near Beaverton, Oregon. Around this time, the focus of their business changed as well. Although the company still produced reels of tourist attractions and scenery, many of its subjects had evolved into more child-friendly fare. 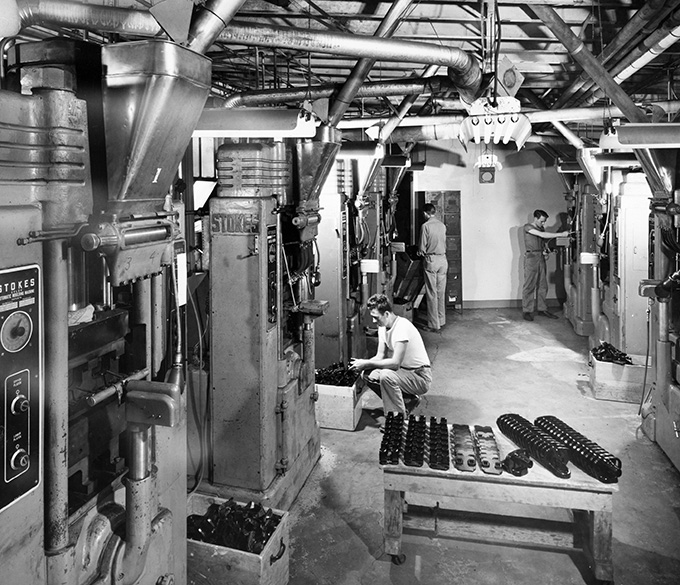 Workers at Sawyer’s make plastic pieces in 1952 that would be later assembled into View-Masters. OHS Research Library, 0029P072 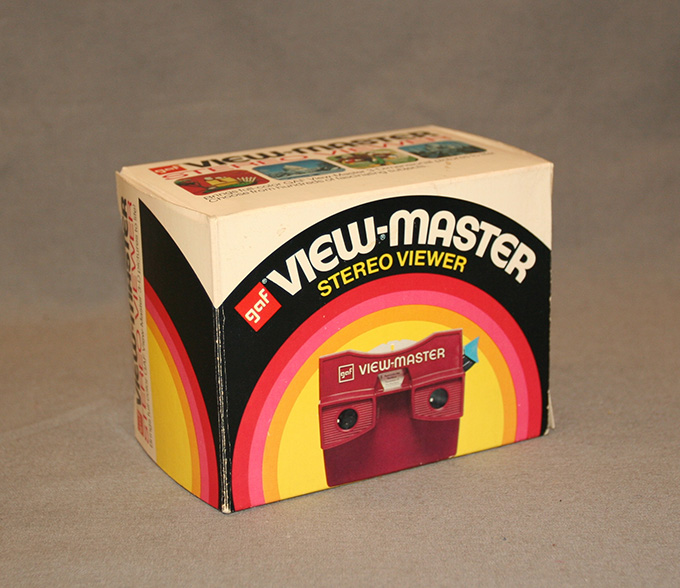 That same year, View-Master also obtained licensing rights for Disney properties — which proved especially lucrative when Disneyland opened in 1955. Over time, reels also featured other beloved characters, including Hanna-Barbera cartoons and comic characters such as Casper the Friendly Ghost, Snoopy, Spider-Man, and Captain America. By the 1950s, View-Master had become one of the most popular toys in the country, a trend that continued into the 1970s. The reels were sold practically everywhere, including grocery stores, pharmacies, toy stores, and souvenir shops.

By the 1980s and 1990s, the popularity of View-Master began to wane as video games and handheld gaming devices flooded the market. The View-Master, with its still images, had trouble competing with the lights and animation of electronic devices. The company changed hands a few times in the 1980s and 1990s before being purchased by Mattel in 1998. The Beaverton plant closed in 2001 after producing the toy for over 60 years in Oregon. In 1998, Mattel donated items related to View-Master’s heyday from the 1950s to the 1970s, including drawings, figures, props, set pieces, and molds used to make three-dimensional dioramas for the photographic reels, to the Oregon Historical Society.

Each reel had fourteen images, in seven duplicate pairs, to create seven individual three-dimensional scenes in a storyline. Although the images are still, the scene progressions gave the impression of action, and cartoon characters that were typically flat seemed to come alive as three-dimensional figures. They’re certain to inspire nostalgia in anyone who grew up playing with this classic toy.

Below are a few of the treasures that make up this wonderful collection:

Good Witch of the North (Locasta) figure used for The Wizard of Oz reel, 1957.

Introductory sign for Wonders of the Deep View-Master reel, 1954.