Today we’re unearthing a story from Oregon lawyer and judge Noreen Saltveit McGraw. McGraw shared a law practice in Medford with her father, Edward Cantrell Kelly. When Kelly was appointed to the Jackson County Circuit Court, McGraw found herself in charge of their law practice and all of his cases. She also served as a municipal judge in Medford, assistant Oregon attorney general, and district judge pro tempore.

The following excerpt (that we lightly edited for clarity) is a tale McGraw told during an interview conducted by S. Diane Rynerson (SR 1277, tape 1, side 1) between May 24 and July 31 in 2000. In the interview, McGraw relates the story of the first case she argued before U.S. District Court Judge Gus J. Solomon, which just happened to involve her defending the youngest member of a family of train robbers. 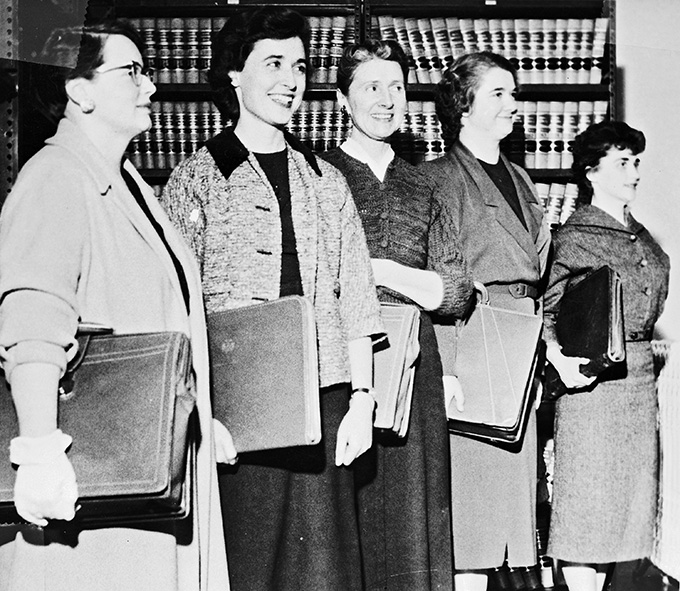 Noreen Saltveit (second from left) stands with other Oregon Women Assistant Attorneys General in about 1964. To the left of Saltveit is Carlotta Sorenson, and to the right are Catherine Zorn, Jean King, and Bonnie Mentzer. OHS Research Library, OrHi 105429.

McGraw: My first brush with [Judge Gus J.] Solomon was back in the late 1950s because my dad represented Hugh DeAutremont, who was the youngest of the three train robbers…. There were three brothers who held up a train back in the 1920s, in a get-rich-quick scheme that backfired, and four men were killed. It was a notorious case throughout the state, but particularly in Southern Oregon.

And, without going in to all the details of the case which, of course, happened long before I was born, the upshot was that Hugh DeAutremont, [who] was seventeen at the time of the killings and the train holdup, was the first to be caught. His older, twin brothers were not caught for quite a while. And Southern Pacific and the Post Office, together, were determined to have these three brothers hung. It was death by hanging in those days. And, there were so many lawyers trying to get Hugh that, apparently, they tripped all over themselves, and he ended up with a hung jury on the first trial.

And how that plays in with my background is that my mother [Mary Greiner Kelly] was a reporter, not a court reporter, but a newspaper reporter, for a paper at that time. She covered the DeAutremont trial, and she ended up being corresponding friends, with Hugh DeAutremont, and his mother. Eventually, Hugh was convicted and sentenced to life. The jury voted against, in effect, against the death penalty on one count of murder.

Well, my mother, because of corresponding with Hugh DeAutremont, talked my father [Edward Cantrell Kelly], who was then a practicing lawyer, into representing Hugh and trying to get him out on lack of speedy trial; the reason he kept getting turned down after thirty-five years in the prison was because of the three pending murder indictments. So, my dad filed a motion to dismiss, which was overruled by the local judge. The judge had been around at the time of the murders and would just as soon have seen Hugh DeAutremont executed. In the meantime, of course, his two older brothers had been caught and they were also in the Oregon State Penitentiary. But this has to do with Hugh. 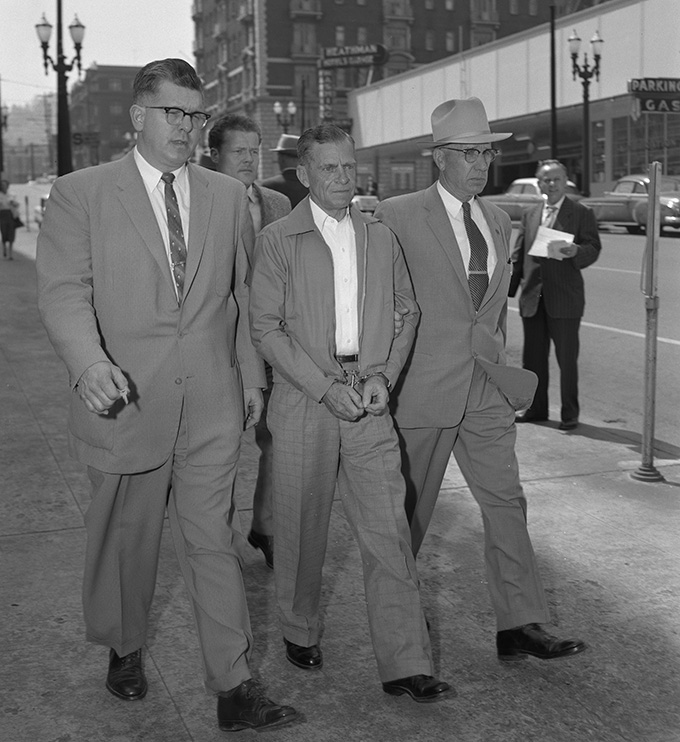 On May 1, 1958, Hugh DeAutremont (center) arrives at the federal courthouse with two U.S. marshals to face additional charges from a 1923 bombing and robbery of a Southern Pacific mail and passenger train in the Siskiyou tunnel near Ashland, Oregon. OHS Research Library, Org. Lot 1284, box 62, 3078-1.

When my dad went on the bench, I inherited the case. And, so, I wrote the appeal briefs and argued it before the Supreme Court. It got turned down there. And, then, under that statute, you get a trial within ninety days — it’s the speedy trial statute. Without going into a lot of detail about all of that, I finally was successful in getting Hugh out. But only after having to go to federal court as well as state court because once I had gotten the state court indictments disposed of, then I found out there were two pending indictments in federal court.

Well, Gus Solomon, who was the presiding judge at that time, was kind of anti DeAutremont, not because of the DeAutremonts, but because he was mad at Phil Roth — Phil had run against Edith Green for Congress…[who] was a pet of Gus Solomon’s — and so [Solomon] thought I was in cahoots with Phil Roth on the case….He was somewhat rude to me. But, that was for the political reason.

I filed a motion to dismiss the indictment, I took it up to Judge Solomon’s chambers and went in with a local lawyer named George Friede, who was not a criminal lawyer at all, but was a friend of Judge Solomon’s and just somebody on the scene in Portland. Solomon said: “Your motion for a speedy trial is denied.” After all, it had only been thirty-five years. [Laughs] But, he says: “You can have a trial next week, if you want. Do you want to go trial next week?”

I said, “Well, no, Your Honor, because I don’t even know what the indictments are.”

He said, “What do you mean, you don’t know what the indictments are?”

I said, “Well, the clerk wouldn’t let me see them. He said they were sealed.”

So, Solomon picks up the phone and says “Max,” or whatever the county clerk’s name is, “there’s a little lady up here and she’s coming down to your office and I want you to open up those indictments.”

I got to see what the indictments were. They were burglaries from the mail train and robberies, but there was no criminal, there was no capital offense, and that was why they sealed them. They thought that if Hugh and his lawyers thought that there was a death penalty, maybe they wouldn’t want to try to go to trial on it.

So, I will say, to Solomon’s credit, that he did eventually put Hugh on probation and, so, that removed the final barrier, and Hugh DeAutremont finally was released from prison — because he’d been a model prisoner. Even the warden was kind of going to bat for him. Well, anyway, that’s another story.

More of Noreen Saltveit McGraw’s interview can be found on OHS Digital Collections.