Home Blog Which Takes Longer: Building a Volcano or Naming It?

This aerial view of East Lake in Newberry caldera shows Qdai Dome, a name that was approved in 2020 by the Oregon Geographic Names Board as well as the U.S. Board of Geographic Names. Photograph by John Pallister.

Julie Donnelly-Nolan, a research geologist with the U.S. Geological Survey (USGS), might suggest that it’s a close call. She and colleagues have been mapping the geology of Newberry Volcano in central Oregon, including Newberry National Volcanic Monument, for more than two decades. The geologic map of the volcano is the fundamental document that tells the story of the eruptive history using stratigraphy and age dating along with studies of ash deposits and drill cores. The purpose of her long-term research, she explains, “is to assess the volcano’s potential hazards and attempt to explain what might happen in the future.” Newberry has historically been difficult for mapmakers or scientists to explore and document, given the volcano’s size, geographic remoteness, natural ruggedness, and thick vegetation cover. As a result, the volcano is “name poor.” Over the course of a decade, Donnelly-Nolan has also worked to remedy this “name-poor” status.

That research is important. In 2005, the USGS ranked Newberry volcano as “a very high-threat volcano because of its potentially explosive nature, frequency of past eruptions, and proximity to people and infrastructure.” The volcano has been intermittently active over the past 500,000 years, and lava flows that spewed from Newberry’s vents extend over an area of 1,200 square miles. The last eruption was a mere 1,300 years ago — the blink of an eye in geologic time. Today’s population centers of Bend, Redmond, and Sunriver sit atop old Newberry flows.

Map names provide location context for the users, and recent high-resolution topographic data from LIDAR surface-mapping technology has exposed many previously hidden features on the volcano. As a result, Donnelly-Nolan has had even more volcanic features to visit and more units to include on her geologic map. The lack of place names around Newberry Volcano, however, created a problem during this work — she could reference only officially approved place names in her reports. To solve this problem, she worked with her colleague Robert Jensen, a USGS volunteer and retired U.S. Forest Service geologist, to create a list of nearly 100 geologic features that they believed needed place names. As she explained, “Newberry is the land of many cinder cones, lava flows, and other features — and few names. The features to be named were selected based on their importance to the geologic story of Newberry Volcano as I proceed toward the completion of the geologic map. Names significantly aid in explaining the eruptive history of this very high-threat volcano.” 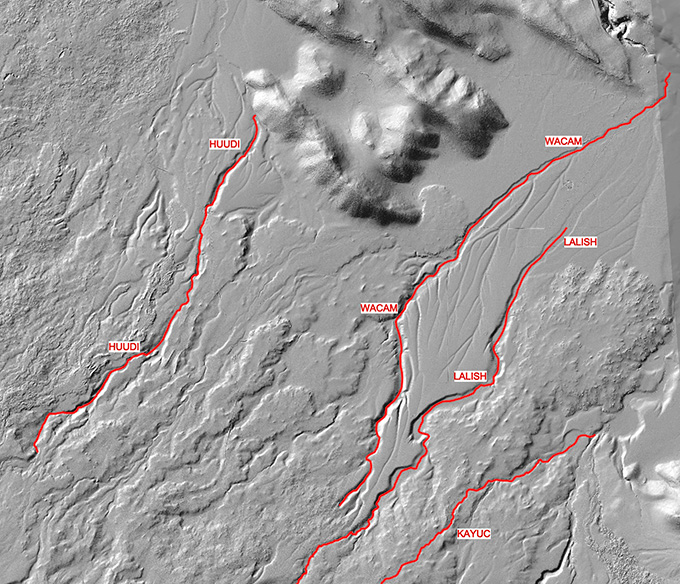 High-resolution topographic maps such as this one are created using LIDAR surface mapping and have revealed many hidden volcanic features, which geologists aim to include on geologic maps. This image of the northeastern part of Newberry Volcano highlights the newly-named dry channels, known as “draws.”

In early 2008, Donnelly-Nolan met with the Oregon Geographic Names Board (OGNB) to discuss her proposal. She rolled out her latest in-progress geologic map: an aerial view of the volcano marked with dozens of red crosses, features that she hoped to name. OGNB members easily grasped the problem Donnelly-Nolan faced and were willing to process and review the proposed list of names for the volcanic features. U.S. Board on Geographic Names (BGN) policy, however, required that she submit a separate proposal for each name and obtain prior approval from affected counties and the relevant land management agencies, primarily the Deschutes National Forest, which manages most of the volcano’s lands. The proposals received no response, and a decade passed before the issue was revisited. 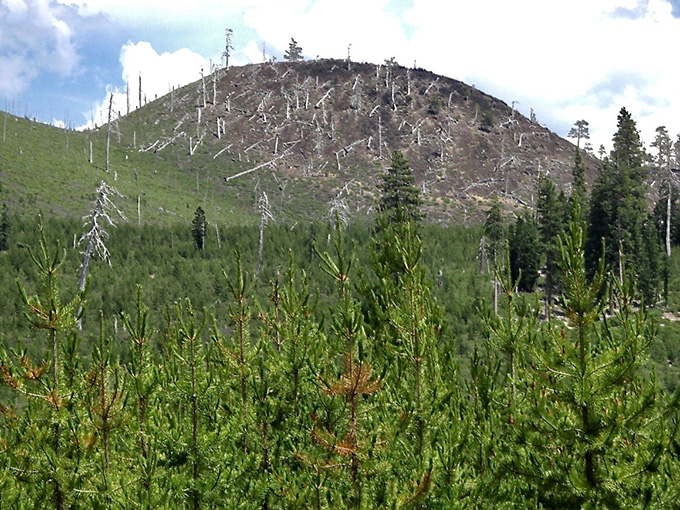 During those ten years, BGN eased its submittal policy and began accepting batches of new name proposals. OGNB contacted Donnelly-Nolan to inquire whether she still had her wish-list of Newberry Volcano place names from that 2008 meeting, and she did! She re-contacted the affected entities and included additional names that had been used informally during everyday work or in geologic publications. In response, Deschutes National Forest recommended that Donnelly-Nolan limit the initial submission to 25 names, and in 2019, both the OGNB and the BGN approved the proposal unanimously. The approved names included Abacus Buttes, Huntington Butte, Jackpine Butte, Lithic Butte, Erratic Butte, Skunk Rim, and Shaped Hill.

Donnelly-Nolan then began working on a second tranche of names, which was not approved as quickly. At the urging of the Deschutes National Forest, Donnelly-Nolan worked with local tribes whose traditional homelands include the volcano. After a meeting with Perry Chocktoot, the Culture and Heritage Director of the Klamath Tribes, she received a list of 75 Native place names in the Klamath and Paiute languages. Most geographic place names are binomial, consisting of two parts: a “specific” part that identifies the place, area, or feature; and a “generic” part, usually a single toponymic term such as ‘stream,’ ‘mountain,’ or ‘canyon.’ The BGN requires that a proposed name include an English generic as part of the name. The 75 place names on the Klamath Tribes’ list used Native words for both parts of the suggested names. For example, Skoksam in the Klamath language means ‘spirit,’ and Yayna means ‘mountain.’ So, Skoksam Yayna represents the Klamath Tribes’ name for Spirit Mountain. In the ensuing back-and-forth discussions, the tribes agreed that Donnelly-Nolan could use English generic names to maintain standardization of USGS maps.

Nearly a year later, following approval from Deschutes National Forest, Donnelly-Nolan submitted a new list of 26 proposed names to the OGNB, which approved all the names and forwarded the list to the national board for final approval. After an initial BGN rejection and healthy debate over whether 12 of the names were inaptly named as buttes, all of the names were finally approved in July 2020 — 12 years after Donnelly-Nolan’s initial meeting with the OGNB, but again, a mere blink of an eye in geologic time. Newberry Volcano’s identity grew to include Balbali Butte, Dukdukwasam Butte, Gekgekli Butte, Wasam Butte, Sabas Butte, Atsa Cone, Qdai Dome, Saiga Hill, and Huudi Draw, among others. 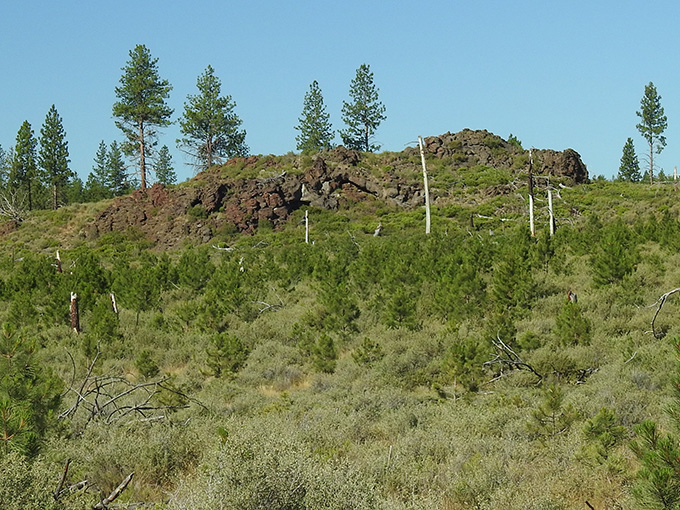 In describing Newberry Volcano, Donnelly-Nolan has written that it has hundreds of cinder cones and lava flows. When asked if she would propose to add more names, she made no promises, explaining that she could accomplish her mapping goals without additional names. She pointed out, however, that many unnamed features remain. It will be up to future Newberry researchers, tribal members, or interested citizens to do that work. Meanwhile, if signs of volcanic unrest at Newberry are detected, Donnelly-Nolan’s work in mapping and naming its volcanic features will help inform the likely course of those events.