Home Blog “Most Extraordinary of Busses”: Documenting the Rise and Fall of the Mt. Hood Aerial Skiway with OHS Collections

In January 1951, the Mt. Hood Skiway tram climbed for the first time from below Government Camp to Timberline Lodge. It was the longest of its kind in the world and attracted the attention of newspapers, popular magazines, and newsreel producers on its preview voyage. Despite this excitement, the tram was short-lived and ceased operating five years later. OHS Research Library, Org. Lot 1284, Al Monner Photographs, 1936–1974

With winter in full swing, thousands of skiers will travel to Mt. Hood for some fun in the snow. While most winter sports enthusiasts now drive and take lifts to their destinations, following World War II, there was another way to travel from Government Camp to Timberline Lodge — the Mt. Hood Skiway aerial tram. Part ski lift, part flying bus, the tram’s creators had high hopes for the vehicle’s success. While processing* a collection recently, I discovered that the OHS Research Library holds a number of Skiway materials, including photographs and corporate records, that help illustrate the tram’s short-lived, yet innovative operations.

On the morning of October 24, 1947, the newly formed Mt. Hood Aerial Transportation Company held its first meeting at the American Bank Building in Portland. At that time, there were only two stockholders, Dr. J. Otto George and A.L. Greenwalt, who each held 250 shares. George established the company with a vision to build a state-of-the-art aerial tramway to connect Government Camp with Timberline Lodge. The “Skiway” made its first preview run in January 1951, after a time-consuming and costly construction process, to become the longest of its type in the world. That year, in an August Popular Science article, Richard Neuberger described the Skiway as the “most extraordinary of busses,” scraping clouds to deposit passengers at Timberline Lodge. Despite that notoriety and high expectations, by 1956 the tram ceased operations due to dwindling revenues. 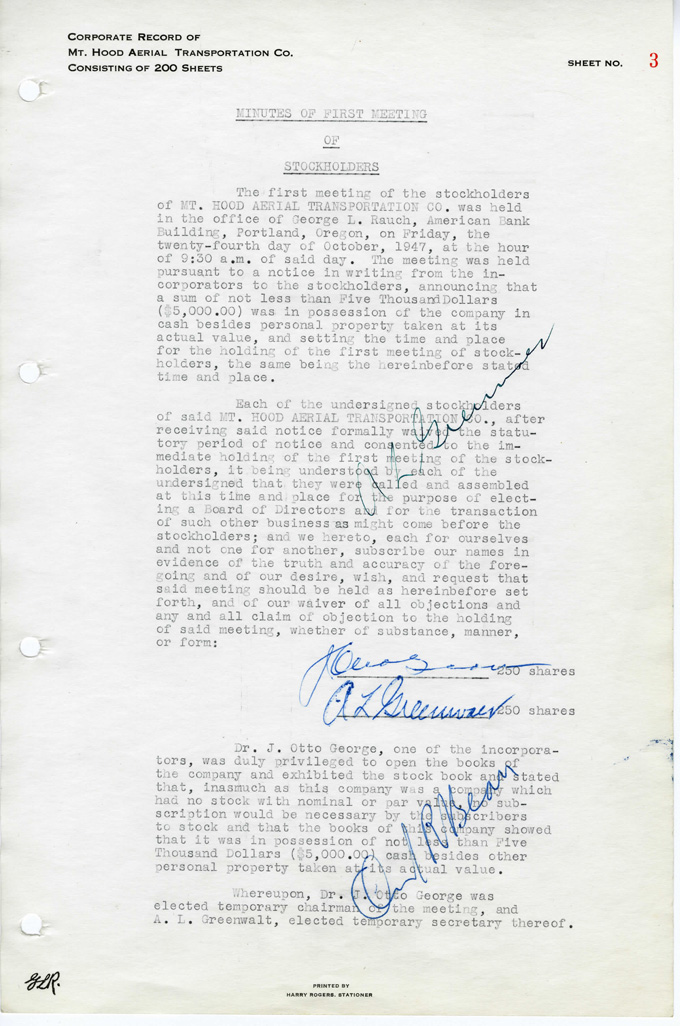 On October 24, 1947, the Mt. Hood Aerial Transportation Company stockholders met for the first time with the goal of establishing a state-of-the-art tramway connecting Government Camp and Timberline Lodge. These meeting minutes from that first meeting are among the company’s corporate records held at the OHS Research Library in Coll 146, Mt. Hood Aerial Transportation Co. records.

Unlike other shorter, lighter lifts, the Mt. Hood Skiway (“Skyway” presented copyright issues), perhaps unwisely, operated with two modified city buses. Outfitted in Portland by Willamette-Pointer, the buses each used two 185-horsepower gasoline engines to haul the bus up a stationary 1.5-inch diameter cable — a technology also used in timber operations to haul logs out of the woods. The Oregon Journal photograph collections held at the OHS Research Library includes great images of the more than twenty-five miles of cable being hauled up the mountain and being installed along the 3.2-mile line from the lower terminal building to Timberline Lodge. 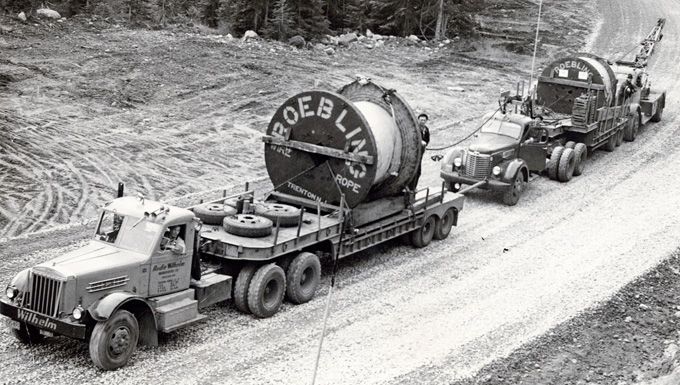 The tramway structure required over twenty-five miles of cable to support the Skiway along the 3.2-mile journey up the mountain. Here, that Roebling cable is being hauled up the new Timberline Highway, which opened in November 18, 1949. OHS Research Library, Org. Lot 1027, Oregon Journal Photographs collection 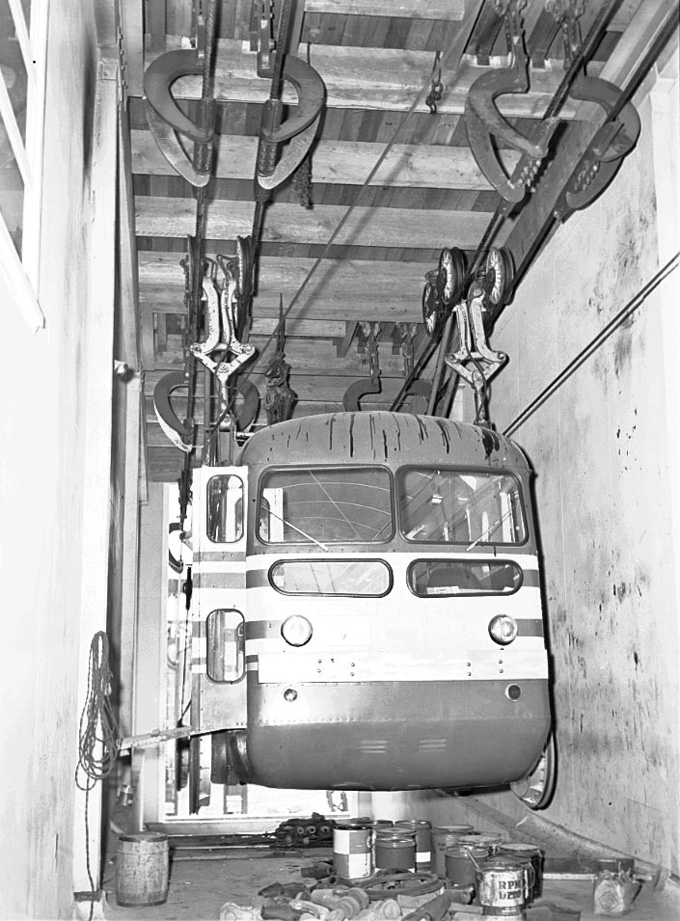 It took planners and workers over three years to clear a line for the Skiway and build its structure. Here, the Skiway bus sits at the terminal building on July 26, 1950, about six months before its preview trip up the mountain. OHS Research Library, Org. Lot 1284, Al Monner Photographs

Equipped with streetcar-style seats that flipped to allow passengers to always face forward, each bus had a capacity of 36 riders. The customized busses cost $40,000 each — compared to the $16,500 cost for a similar passenger bus — and guzzled seven gallons of fuel per round trip. When finally hung on the cables, the buses’ incredible weight resulted in a 25-minutes-long, slow trip up the mountain. Each bus therefore, could make one round-trip per hour, moving only 72 people per cabin — proving to not be a very profitable business model.

Also cutting into profitability was creating the complicated route for the line that began at a lower terminal building — that held a restaurant and snack bar — below Government Camp and cut a clear path to the west side of Timberline Lodge. The company hired Forest Service veteran Volley Reed in 1948 to head up two cutting crews that worked from either end of the route with the idea that they’d eventually meet in the middle — Reed later altered the plan when it was discovered that the crews were not, in fact, cutting a straight line. When the crews finished two years later, work began on installing 38 steel towers to hold the miles of cable necessary to run the tram. 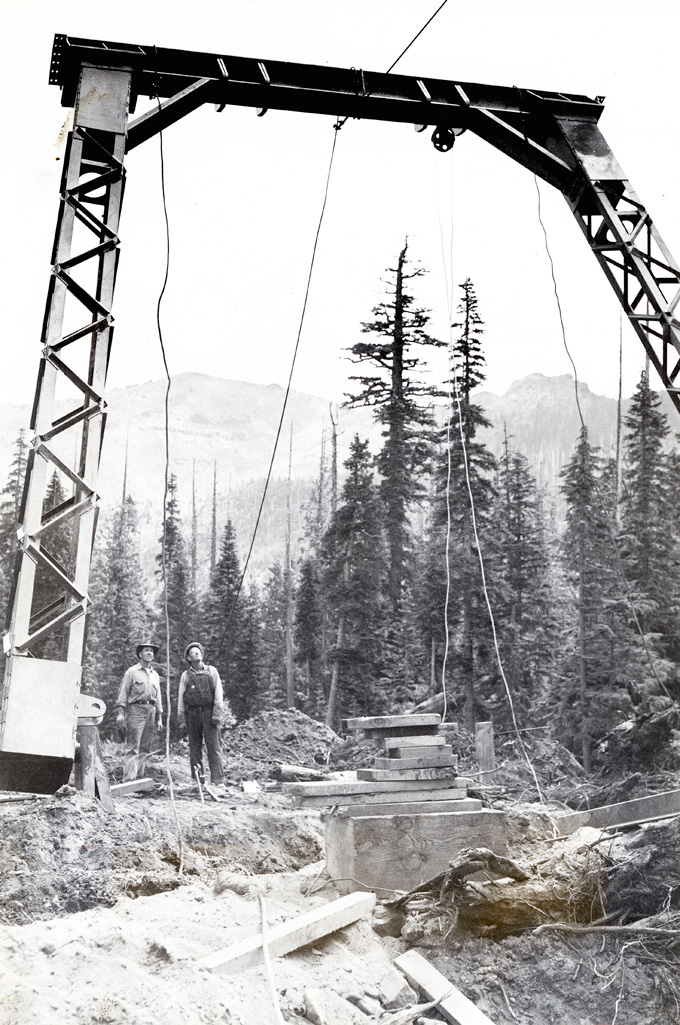 On August 26, 1949, workers look up at one of the 38 steel towers that supported cables that carried the Skiway busses up Mt. Hood. OHS Research Library, Org. Lot 1027, Oregon Journal photographs collection, 1902–1982 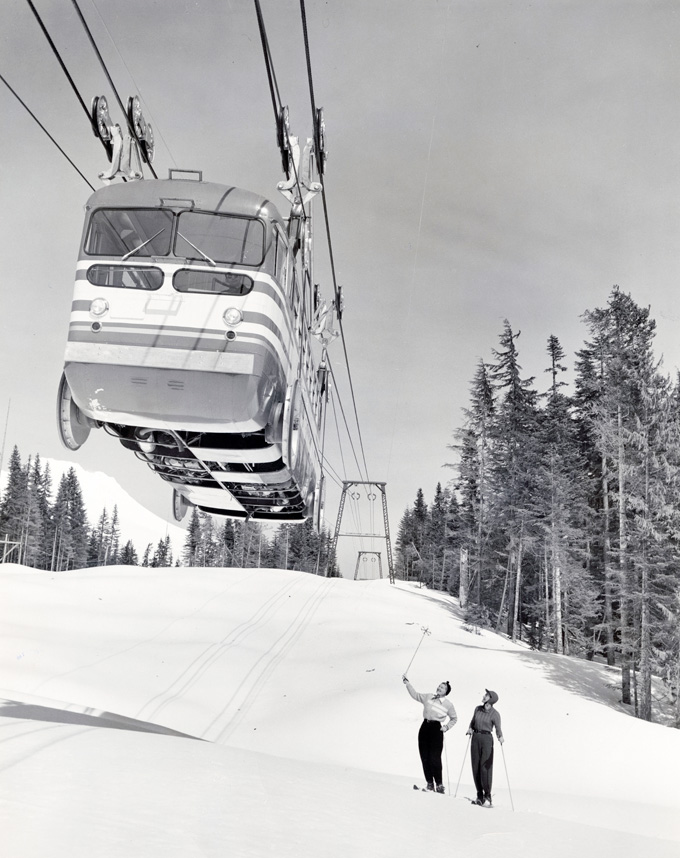 Despite significant snowfall on January 2, 1951, the Skiway tram was packed for its first run with representatives from numerous local news outlets. The bus was laboriously pulled up to one side of a tower, to coast quickly down to a low point, before climbing the next. Newsreel footage from the era even captured the Skiway in motion. According to Bill Keil, a Timberline Lodge publicity manager during the 1950s, “the tramway crippled its way through five years of marginal operations before suspending” in 1956.

Corporate records in the Mt. Hood Aerial Transportation Co. collection (OHS Research Library Coll 146) shed some light on how the company tried to salvage the failing venture. From 1956 through 1958, shareholders met numerous times to discuss its future. At a meeting held on August 9, 1957, they discussed a redesign using a moveable cable system with 30 to 40 cars, rather than two buses. At this same meeting, however, shareholders expressed their trepidation for new expenditures. The skiing between Timberline Lodge and the lower terminal was deemed too poor to warrant a standard ski-lift system, and most of their ridership had occurred during the summer months.

According to long-time board member George Rauch, there was also another problem, which was “a fine highway that competes bitterly with us.” At that same August 9 meeting, he noted some of the other issues he saw with the Skiway:

I’ve ridden the tramway. I’ve listened to the shrieks and I’ve taken the jolts over those, what you call them — the saddles, and I’ve heard what people say. Now, perhaps some of those things could be eliminated. In my opinion, having fifty years’ experience with business organizations, this first was improperly conceived because it was put on us — an effort to make an experiment to prove to the world that Roebling Company could haul people as well as they do logs. Therefore, it’s improperly constructed mechanically.

Despite these discussions, further attempts were made to save the Skiway tram throughout the remainder of 1958 and into the next year. By June of 1959, despite repeated efforts to carry out experiments for a redesign, a Liquidating Committee was formed. Over a year later, the lower terminal building was sold in 1960 to stockholder William Simon, for $25,000. In December of 1960, Zidell Machinery & Supply Company bought the two buses, a jeep, an engine, and other tram parts for $10,080. 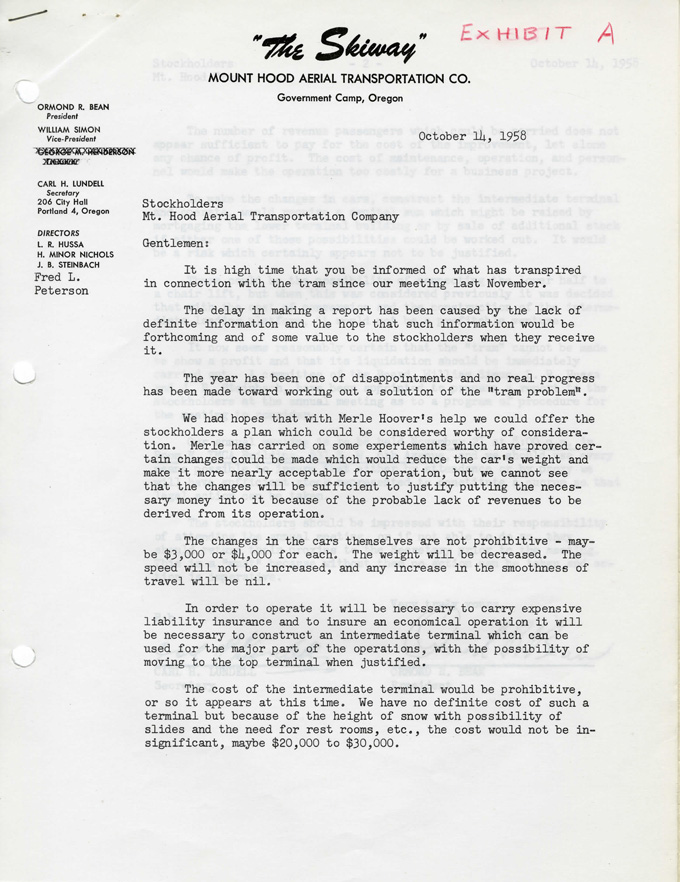 On October 14, 1958, President Ormond R. Bean and Secretary Carl Lundell sent a letter to stockholders of the Mt. Hood Aerial Transportation Co. informing them of difficulties in resolving problems with the Skiway operations. They cited possibilities for converting the busses into smaller cars, but thought the project might be cost prohibitive. OHS Research Library, Coll 146, Mt. Hood Aerial Transportation Co. records, 1947–1966

*This project has generously been supported by the Jackson Foundation and the Gladys Krieble Delmas Foundation. The grants will be used to process and digitize photographs from Org. Lot 1284, the Al Monner Photographs, encompassing the work of the Oregon Journal photojournalist from 1936 to 1959. Several of the Skiway photographs featured in this article were created by Al Monner and rediscovered as part of this project.