When the National Association of Watch and Clock Collectors (NAWCC) Chapter 31 contacted the Oregon Historical Society in 2019 about the possible donation of two clocks that were once located in the flagship Meier & Frank department store in Portland, we were delighted. Joseph Mayer & Brothers, a clock-making company in Seattle, built and installed both clocks in 1915 when the department store first opened. At the time of donation in spring 2020, the clocks had been on view at the Gresham Historical Museum, and after over a year delay between donation and transport due to the COVID-19 pandemic, OHS placed one on display in the lobby of its downtown building in August 2021.

The larger, primary clock, which is now on display at OHS, had been located in an office area in the Meier & Frank building and served as the main timekeeping device sending the time signal to a number of secondary clocks (one of which OHS also received) that were located near the elevators on the store’s public floors. They each measured over 24 inches in diameter with a clock face on either side. Countless people used these iconic clocks as location finders and led to the commonly used phrase “Meet Me Under the Clock.” Best practices also suggest that the primary clock be kept running to keep the moving parts well-oiled and in working order, so OHS decided to put it on display as soon as possible after the move.

The primary clock boasts an impressive design feature, patented in 1912, in which a heavy electric motor runs up a set of chains once a day and turns off when reaching the top. This motor acts as the counterweight powering the pendulum that operates the clock mechanism. It’s quite impressive for its time!

Franc Gigante and Shelly Durica-Laiche work on the frame Gigante built to safely transport the Meier & Frank clock from the Gresham Historical Museum. The frame ensured the clock stayed as vertical as possible to protect the fragile moving parts inside. Oregon Historical Society photograph.

While OHS waited for the right time to move the clocks, I began designing and fabricating a transportation frame that would make it possible to safely remove the larger clock from the Gresham Historical Museum. Due to the fragile moving parts inside the clock, it was necessary to keep it as vertical as possible. Because the clock was taller than the main doorway at the museum, we needed to build a custom mobile framework that would allow us to lower the clock to fit through the door without laying it flat. We’re excited to share a short video of the framework in action at the end of this post.

In the video, we provide a behind-the-scenes view of the frame being constructed and transported from the Oregon Historical Society to the Gresham Historical Museum. On moving day, OHS museum staff and NAWCC Chapter 31 members Bill Butcher, George Matto, and David Noall partially disassembled the clock, including removing the oak cabinet, the hands on the clock face, and the 80-pound pendulum weight, in preparation for transit. Some of the more delicate moving parts were tied down to prevent movement and damage during the move. The clock was then loaded on OHS’s moving truck and placed and carefully reassembled in the lobby at OHS’s downtown location. There, NAWCC members also greased its moving parts and got it back in working order. Once the electric motor is plugged in, it begins to run up the chain until it reaches the top, then gravity takes over and it slowly tracks down the side rails. This puts pressure on a series of chains that actuate the pendulum and make the clock run. At the end of the video, you can also see up close the patented motor at work. 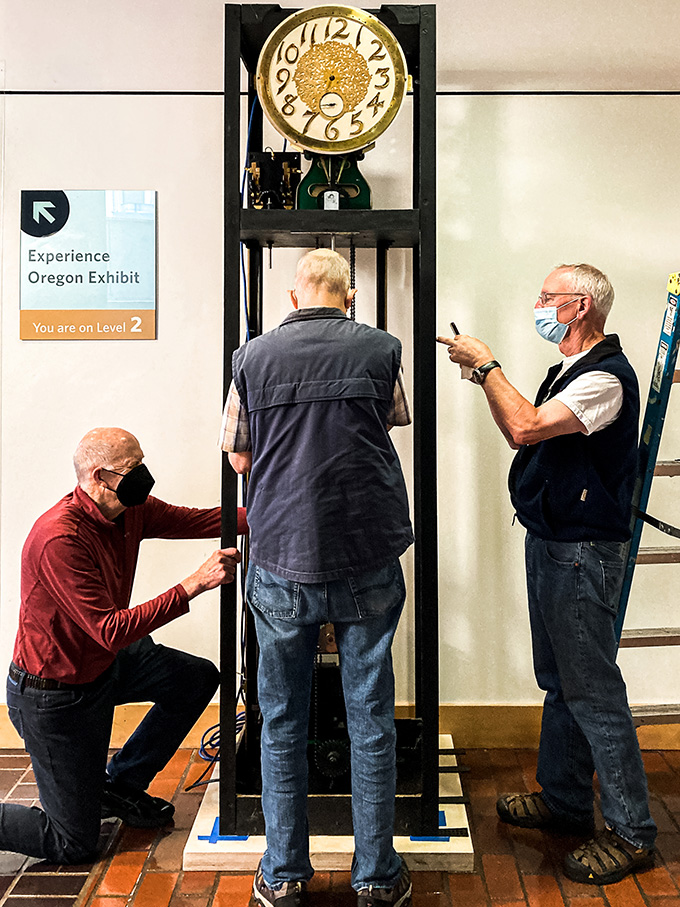