Home Blog Links to Native Past and Present: Ten Creeks on Marys Peak Have New Names

Indigenous people have revered 4,097-foot-high Marys Peak in Benton County for millennia. The Marys Peak watershed boundaries of the Marys, Yaquina, and Alsea Rivers have served as linguistic, cultural, and homeland borders among the Kalapuya, Wusi’n (Alsea), and Yaqo’n (Yaquina) people. Today, the peak remains culturally significant to the Confederated Tribes of Siletz Indians and the Confederated Tribes of the Grand Ronde.

In the early part of 2017, the Marys Peak Alliance (MPA), a group of scientists and local citizens whose proclaimed mission is to inspire the public and Marys Peak property owners to appreciate the physical, cultural, and ecological aspects of the mountain, had in mind to name three unnamed creeks on Marys Peak. The MPA believed that these creeks deserved names to replace the mundane working names of “Tribs A, B and C.”  So, the MPA contacted the Cultural Resources Departments of the Confederated Tribes of the Grand Ronde and the Confederated Tribes of Siletz Indians to inquire whether there was interest in naming these three, plus seven more small, unnamed creeks that flowed off Marys Peak. All ten creeks, historically and culturally, were seen as important creeks for both Indigenous and non-Indigenous people.

Over the course of several months, two convenings took place at the Eena Haws Native American Long House, located at Oregon State University (OSU). The participants at these convenings were the two Confederated Tribes, Siletz and Grand Ronde, and the primary landowners, which included the U.S. Forest Service, the U.S. Bureau of Land Management, the City of Corvallis, Starker Forests, OSU, OSU’s Spring Creek Project, and the MPA.

“Ahmoolint” (Wolf) Creek, is one of ten creeks renamed in 2019. Tribal members of the Confederated Tribes of the Grand Ronde proposed a Kalapuya name for this creek that is located in the homeland of the Kalapuya people. Photograph courtesy of Jesse Norton

The outcome of the two meetings was the consideration and then approval of ten new Indigenous names for the creeks. Each name was chosen to reflect the area's linguistic, cultural, and geographic history and in the appropriate Indigenous language.

Six of the ten creeks are found in the Rock Creek watershed, homeland of the Kalapuya people who are members of the Confederated Tribes of the Grand Ronde. Tribal members proposed Kalapuya names for these creeks:

And lastly proposed, for a creek in the Yaquina River watershed, was Yaqo’n, which is what the Yaquina people call themselves in their own language. 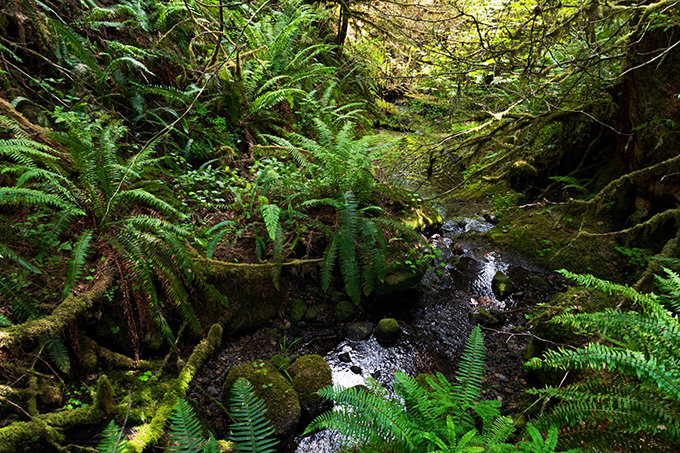 “Ahsney” (Coyote) Creek, is named after a protagonist in the Marys River Kalapuya stories. Photograph courtesy of Jesse Norton

David Eckert, a member of the MPA, had prior experience with the geographic naming process: a few years previous, the Marys River Watershed Council, of which Eckert was also a member, submitted a naming proposal for Lamprey Creek, a small, unnamed tributary that flows into Oak Creek, just west of OSU, in Benton County. The proposal Eckert put together included maps, aerial photos, documentation about the Pacific lamprey and its relation to the creek, and letters of support, which the OGNB voted to send to the U.S. Board of Geographic names and was officially approved in August 2015.

When Eckert again reached out to the OGNB to let them know that the Marys Peak Alliance planned to submit ten new proposals for creeks that flowed off Marys Peak, he provided maps, photographs, historical references, and narrative of what had transpired up to that point, including the two convenings. As with the Lamprey Creek proposal, Eckert also invited the OGNB members to visit some of the creeks in the new proposal. Few outsiders are allowed into the City of Corvallis Watershed on the east flanks of Marys Peak. Members of the MPA and the OGNB caravanned in several vehicles from one creek to the other. There is no direct access to walk along the creeks as they descend quickly down the mountain through steep, narrow notches, often disappearing out of view when flowing through densely wooded terrain. But from the road the board members were able to see enough to know these creeks make significant contributions to the watersheds they are located in.

In June 2019, the OGNB conducted a full board meeting in Roseburg, and when the Marys Peak proposal came up on the agenda, Eckert gave a presentation in support of the MPA’s proposal. When he finished, the Oregon Board voted unanimously to send the proposal package to the U.S. Board on Geographic Names for a final decision. In September 2019, the U.S. Board included the ten new names on its docket and voted unanimously to approve all ten names.

Oregon Geographic Board members visited each of the ten creeks considered under the Marys Creek 2019 renaming proposal. Here, the “Ahntkwahkwah” (Frog) Creek, is being photographed. Photograph courtesy of Jesse Norton

The new creek names were approved just in time to be added to the latest map revisions to Oregon’s topographic series; the creek names are now official and appear on federal maps and are searchable on the U.S. Board of Geographic Names website. The Oregon Board played a role, be it a minor one, in obtaining success. But everyone can share a sense of pride that we now have ten small creeks on Marys Peak forever linked to their Native heritage — a gift provided by today’s Tribal members.

Please visit the Oregon Geographic Board Names webpage to learn more about this work and new name proposals.