This map of what is now known as Oregon shows the locations of Native people in 1852. This map is included in the Oregon Department of Education’s “Fourth Grade Tribal History Lesson Plan, Social Sciences: People Groups,” which is informed by Essential Understandings of Native Americans, a foundation for Oregon’s statewide Tribal History/Shared History curriculum. Map courtesy of Washington State University Libraries Digital Collections.

Effective social science instruction is the best hope for preserving and expanding democracy. Central to this effort is diversifying the narratives educators and students explore in classrooms. The Oregon State Board of Education has demonstrated its commitment to inclusive K–12 education by implementing Tribal History/Shared History lessons and learning-concept guidance for Holocaust and other genocide studies.

Oregon has implemented a significant change in the last two and a half years for social science. In 2018, an Ethnic Studies Advisory Group created an outline for integrating ethnic studies into social science standards. In early 2019, the first iterations of Senate Bill (SB) 13 (Tribal History/Shared History) lessons for social science classrooms were ready for review. In early summer 2019, Gov. Kate Brown signed SB664 (Holocaust & Genocide studies) into law. In just six months, Oregon became a national leader in shifting and expanding the content of social science classrooms from kindergarten through high school. This year’s adoption of the 2021 Social Science Standards integrated with Ethnic Studies makes Oregon the first state to include ethnic studies in K–12 social science standards. The renewed focus on social science instruction empowers students to become active democratic participants in society by engaging with their communities to pursue a more just and equitable society.

Community organizations and institutions such as the Oregon Historical Society (OHS) are invaluable partners in supporting the expansion of teacher and student knowledge of the past. The initial meeting of the K–12 teachers working on the new 2021 social science standards included a valuable afternoon in the OHS Experience Oregon exhibit. This immersive display of Oregon’s diversity and history inspired teachers to create standards inclusive of often-unrecognized groups. OHS curriculum offerings, including Experience Oregon, Nevertheless, They Persisted, and Racing to Change (created in collaboration with the Oregon Black Pioneers), are excellent supports for implementing the new standards.

The state social science standards address history, geography, civics, economics, and financial literacy. These provide students with insights into who they are as individuals and their role in a pluralistic democratic society. Effectively implemented, the standards allow students to learn and analyze histories of the past and the dynamics of the present, while developing and strengthening identities. The 2021 standards examine an expanded understanding of Oregon and the United States. They also include opportunities to explore new histories and examples of resilience from communities often underrepresented in traditional textbooks and curricular materials. Oregon social science students shared with educators the difficulty of connecting with images and stories that seemed so different from their own cultural experiences. In an ever-diversifying society, recognizing and celebrating the range of student identities is the first step in creating a sense of shared identity.

Traditionally, U.S. history courses seek to create a shared American identity, while lessons in civics focus on the rights and responsibilities of citizens in a democratic republic. By only celebrating the narrative of the persistence of progress and the triumphalism of expansion, many social science textbooks often fail to investigate the limited liberties of Indigenous peoples, women, the poor, the enslaved, free Black people, and other marginalized individuals throughout history. Dedicated and thoughtful social science teachers always augment textbooks with readings and resources to expand and include previously erased stories of U.S. history, but the inconsistency in what students learn reinforces the need to re-evaluate old approaches. Some of the changes resulting from this re-evaluation are addressed in the new Tribal History/Shared History (SB13) and Holocaust and Genocide Studies (SB664) curriculum.

Native American history has been perhaps the most glaring absence from K–12 social science curriculum. The stories of Indigenous people have been typically limited to the misidentification of the Lucayan and Taíno as “Indians” by Christopher Columbus, a Thanksgiving feast a century later, and a quick summary of the so-called Indian Wars. After this early flourish, textbooks typically mention Native Americans on the Trail of Tears or a reservation. Rarely have Oregon students learned the history or about the present lives of tribes living in Oregon. The 2017 passage of SB13, Tribal History/Shared History, disrupts this pattern. 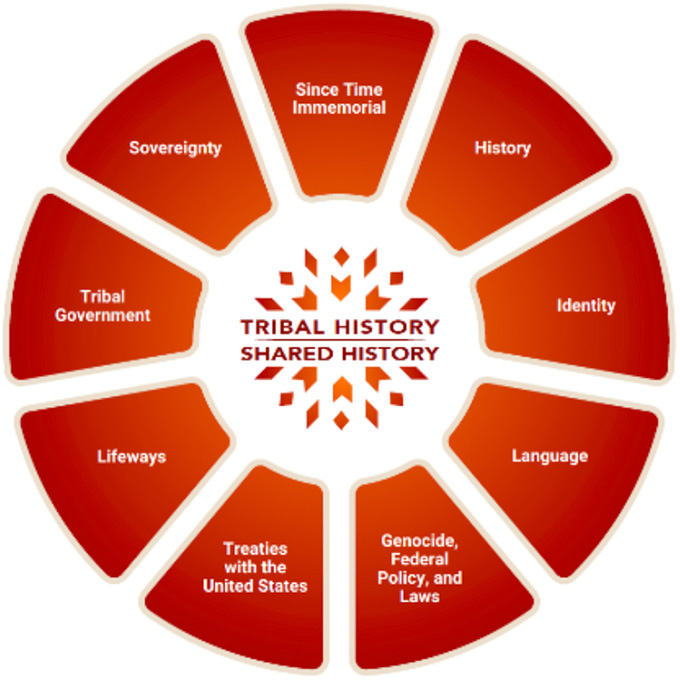 The Oregon Department of Education partnered with representatives of the nine federally recognized tribal governments in Oregon to create Essential Understandings of Native Americans in Oregon: Since Time Immemorial, Sovereignty, History, Tribal Government, Identity, Lifeways, Language, Treaties with the United States, and Genocide, Federal Policy and Laws. These nine essential understandings have been created to serve as an introduction into the vast diversity of the experiences of Native Americans living in Oregon. Courtesy of the Oregon Department of Education.

For the 2021–2022 school year, the nine federally recognized Tribes in Oregon and the Office of Indian Education released lesson plans and teacher training addressing the requirements of teaching the culture, lifeways, history, and government of Native Americans in Oregon. These first lessons target the fourth, eighth, and tenth grades. Additional lesson plans for other grades are coming soon from the Oregon Department of Education (ODE). The Tribes also offer place-based curriculum resources. Teachers from dozens of school districts have already participated in training on the Nine Essential Understandings and are sharing the lessons enthusiastically with students.

The Holocaust has also been inconsistently addressed in Oregon social science classrooms. The Nine Learning Concepts identified in SB664 provide students with the opportunity to confront the immorality of the Holocaust, genocide, and other acts of mass violence and to reflect on the causes of related historical events. The learning concepts support the social science standards by asking students to reflect on the roles and responsibilities of citizens in democratic societies. Students will seek to understand the ramifications of prejudice, racism, and stereotyping and explore the various mechanisms of transitional and restorative justice.

The challenge of creating a just and inclusive democracy requires the meaningful engagement of all students. The new standards, lessons, and learning concepts are a significant step toward creating classrooms where students see themselves as integral actors in our shared history and future. The students in Oregon classrooms today are our best hope for building a more equitable society. The teachers of Oregon will help lead the way.