Today we’re unearthing a story from Jack G. Collins. After earning a law degree at Harvard Law School in 1958, Collins relocated to Oregon to serve as a law clerk for Oregon Supreme Court Justice Walter Perry and went into private law practice in Salem. In 1963, he became an assistant attorney for the U.S. Department of Justice, working under U.S. attorney Sidney Lezak. He was promoted to first assistant U.S. attorney in 1966. Collins became chief of the Civil Division in 1982, and retired from this post in 1995. Following retirement, Collins taught administrative law at Lewis and Clark College and later at Portland State University.

The following excerpt (that we lightly edited for clarity) is a tale Collins told in an interview conducted by Sarah Ryan (SR 1251, Tape 3, Side 2) in 1998. In it he relays an example of community banding together during times of crisis, in this case the 1962 Columbus Day Storm.

Jack Collins: We were up in the office and [at] about five o’clock when we would go home…we looked out and we came to realize that something out of the ordinary was occurring there. I mean, you’d see the newspaper stands…just being blown like light paper down in front of Meier and Frank. And you’d see store windows, large showcase windows, blown in. You’d hear the tinkle and rattle of glass as that was going. And then the power lines you’d see them crackle and they were beginning to come down…. I looked up in the West Hills at least every second or two a transformer was blowing. And the noise level had risen so high. So, Mike Schmeer and I decided we’d better go home. And he had his car. I used to take the bus in those days from Cedar Hills. [We] drove and it took about forty-five minutes and, by golly, if he didn’t get me home. By circuitous routes because trees had come down, blocking roads, and there were live wires all over the place. I remember coming home and the house across the street all the shingles were off the south roof side, they’d peeled off. One or two of ours did, but our roof was pretty good. It was a well-built house. But the power went out.

The experience of that storm the neighbors — there was a neighborhood feeling and a community feeling in that area at that time down there on Tremont Street. But that storm we ate on the hibachi. [There] was, of course, a run on charcoal, and we got charcoal and made oatmeal on the hibachi for five days before the power returned. We’d been huckleberry picking up at Mount Hood, and all that huckleberry was frozen and it was unfreezing. We had no power for refrigerators or anything else. So, we took it over to Chris Neil’s and made huckleberry pie and we didn’t lose the huckleberries. And then eventually somebody ran a long extension cord, outside power cord, across the street and we got power from our neighbor across the street into our house. It was that kind of a thing. The neighbors helped each other survive that storm. 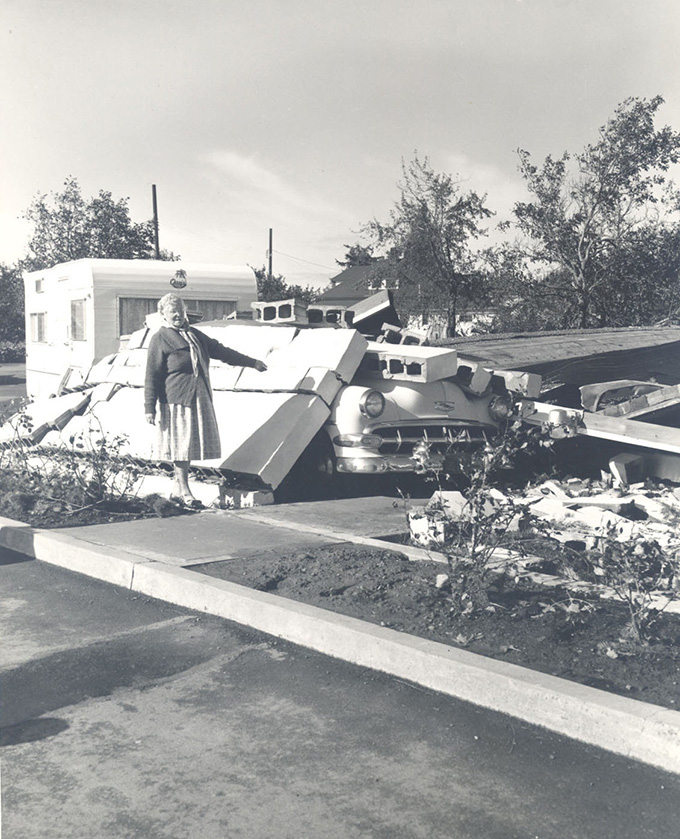