Home Blog “It’s Not Over”: Developing an OHS Exhibition Documenting Forty Years of HIV/AIDS in Oregon

“It’s Not Over: Forty Years of HIV/AIDS in Oregon” is an exhibition on display at the Oregon Historical Society from June 10 to August 14, 2022. It documents the work of Cascade AIDS Project and Our House of Portland and highlights the voices of community members affected by HIV/AIDS in Oregon. Photograph by Evan Kierstead.

In 1981, HIV/AIDS appeared in Oregon and across the nation. This terrifying new disease caused young, otherwise healthy individuals to experience debilitating respiratory conditions and rare skin cancers that killed quickly — no treatments at that time seemed to work. HIV/AIDS affects individuals of all ethnicities, gender identities, ages, and sexual orientations, however, the disease provoked intense stigma and discrimination when it was initially linked to gay men. Nationwide, HIV/AIDS killed more than 700,000 Americans between 1981 and 2021; 4,613 of them lived in Oregon.

Although continuous advocacy from community activists as well as ongoing scientific study have led to tremendous advances in the fight against the disease, the epidemic is not over. A new exhibition at the Oregon Historical Society, It’s Not Over: Forty Years of HIV/AIDS in Oregon, highlights the work of two Oregon-based organizations that led community-based services for those with HIV/AIDS. On display from June 10 to August 14, 2022, It’s Not Over focuses on the work of Cascade AIDS Project (CAP) and Our House of Portland (Our House) to frame forty years of HIV/AIDS in Oregon. The exhibition is anchored with the voices of activists, health care professionals, and members of the LGBTQ community. It acknowledges the intense grief of a deadly epidemic while also celebrating the resiliency of those who survived and those who banded together to support their community in times of crisis.

Grassroots organizers and LGBTQ community members created CAP in 1983 to provide crucial community services in the face of the HIV/AIDS epidemic. Over the next several decades, CAP’s services expanded to include educational outreach, legal advocacy, and primary health care for residents in Oregon and southern Washington. In 2019, CAP donated a collection of objects and its historical records to the Oregon Historical Society and began the process of designing this exhibition to highlight the materials. 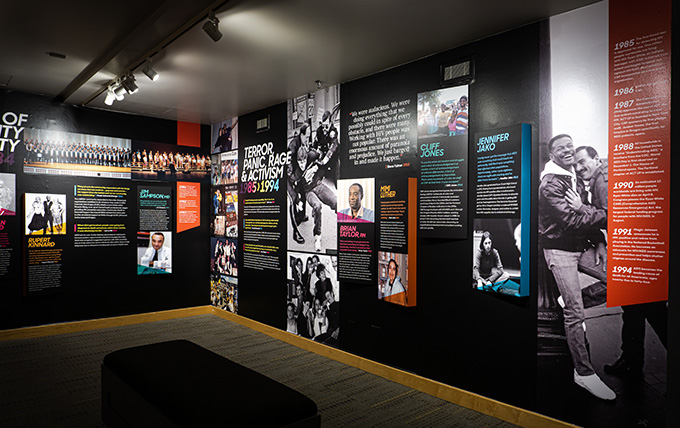 “It’s Not Over” is arranged chronologically into four sections. Rather than progressing by decade, the sections are split based on key dates in the HIV/AIDS crisis. Section two, for example, ends in 1995 with the introduction of the “AIDS Cocktail,” one of the first effective medical treatments available to patients. Photograph by Evan Kierstead.

CAP and Our House (originally two separate organizations that merged on January 1, 2022) hired Historical Research Associates, Inc. (HRA) and Bryan Potter Design to develop the exhibition and secured additional funding and support from Wells Fargo, the Oregon Cultural Trust, and the Multnomah County Cultural Coalition. CAP and Our House created a committee to work alongside the curators and designers to ensure that voices from affected communities took center stage in the exhibition. HRA crafted the exhibition using the CAP collections, staff members, volunteers, and clients as a lens to explore the HIV/AIDS crisis in Oregon. HRA relied on the organization’s institutional knowledge, including a significant oral history project that documents the stories of those who have been a part of CAP’s community.

Quotes from the oral histories and from publications are prominently featured throughout the exhibition, which is divided into four chronological sections that include photographs contributed by CAP and by other individuals and organizations. Many of the materials related to HIV/AIDS are still held in private collections; some records do not exist at all because the social stigma against HIV/AIDS was so strong that many individuals hid their diagnosis and never got an opportunity to share their stories. The exhibition is a testimony to the courage of individuals and organizations who risked personal safety and defied those stigmas to provide care for others. 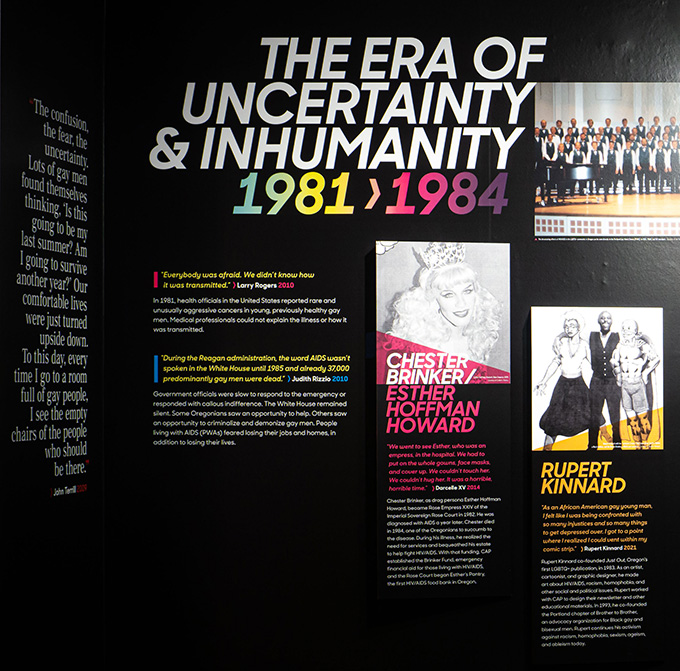 Throughout the exhibition, visitors can read firsthand accounts of what it was like to live through the HIV/AIDS crisis in Oregon. Quotes from oral histories and publications during that time document the courage, resiliency, and grief of the community. Photograph by Evan Kierstead.

It’s Not Over includes many important stories, but there are many more stories waiting to be told. Exhibition space is limited; the potential for other researchers, historians, artists, and activists to explore and highlight LGBTQ history is limitless. The curators hope the exhibition sparks interest and invites further exploration of this significant history through the objects and archival records that are preserved in OHS’s museum and research library. For example, the exhibition features a profile on Rupert Kinnard, an artist and activist who contributed illustrations and co-founded Just Out, a Portland-area LGBTQ newspaper. Just Out was printed from 1983 to 2004, making it impossible to explore all the stories, information, and images contained in the long-running periodical within the exhibition. We hope, however, that visitors are inspired to learn more by visiting OHS’s research library, which has an almost complete run of the publication as part of its Gay and Lesbian Periodicals Collection, 1970–2008 (Mss 2988-7). 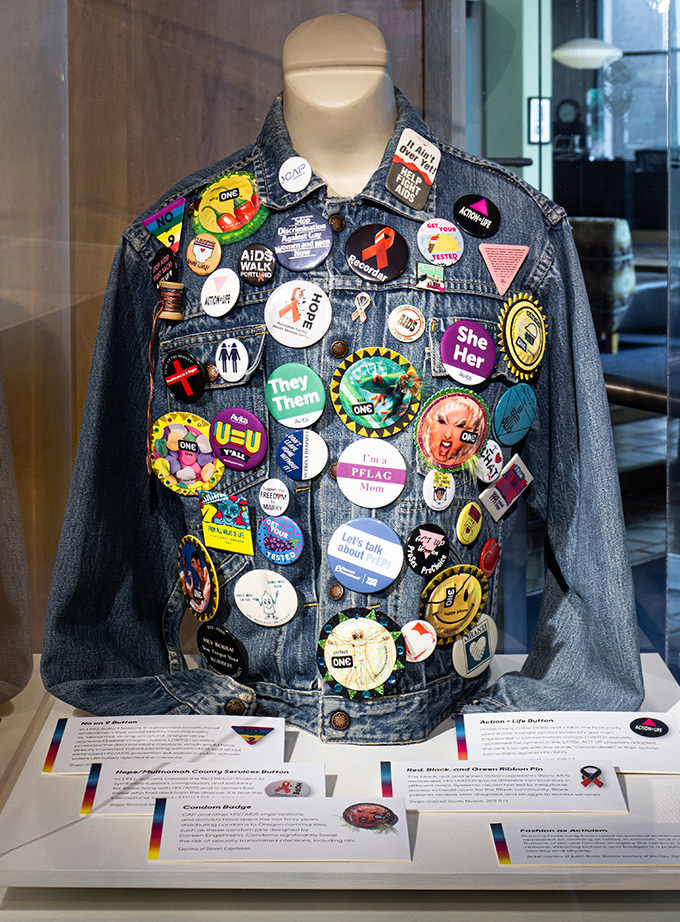 A “No on 9” rainbow pin (located on the upper left in this photograph) is one of many items on display from OHS’s museum and research library. Photograph by Evan Kierstead.

The exhibition also features a “No on 9” rainbow pin and briefly explains the efforts to defeat Measure 9, a ballot initiative that would have legalized discrimination based on sexual orientation. OHS’s research library has a collection of documents related to the political battle, including the Campaign for a Hate Free Oregon records, 1989–1993 (Mss 2988-3). You can also read about the measure in Will Schultz’s “The Rise and Fall of ‘No Special Rights’,” published in the Spring 2021 issue of the Oregon Historical Quarterly.

The Portland Gay Men’s Chorus contributed two photos to the exhibition; the research library has recordings and programs from their performances in its Gay and Lesbian Organizations Collection, 1972–1996 (Mss 2988-4). Another collection that includes materials documenting the Portland Gay Men’s Chorus is the Lesbian and Gay Choruses Collection, 1986–1998 (Mss 2988-11) — and the effort to preserve that history is ongoing. The collections at the Oregon Historical Society continue to grow. In March 2022, longtime activist and educator Gay Monteverde donated her personal collection of Cascade AIDS Project and AIDS Education materials (Coll 888). In an effort to improve access to these materials, OHS library staff members have created a research guide dedicated to exploring their LGBTQ community collections, which also includes the CAP collection.

While there is an immeasurable void left by those who died during the HIV/AIDS epidemic, there is an equal obligation to remember their names, lives, and legacies in Oregon. Many activists and community members survived — HIV is no longer a death sentence. The social climate has in some ways changed for the LGBTQ community in Oregon; in other ways, there is much to be learned in how the community and its allies have fought against discrimination and hate. That fight is not over either. 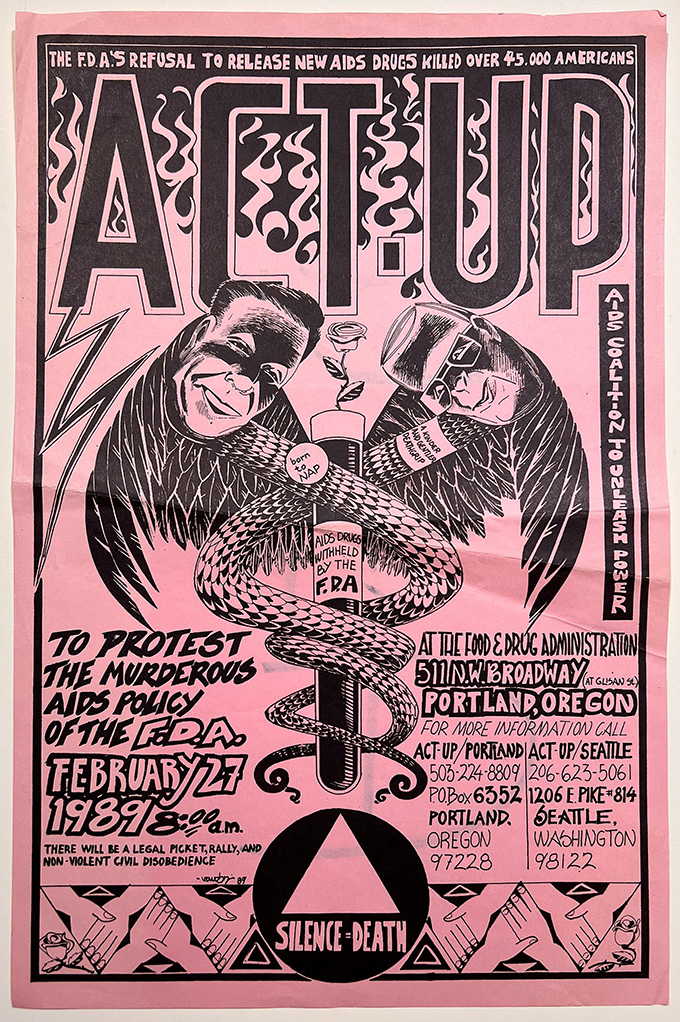 Items held in the OHS research library’s collections are also on display in “It’s Not Over,” including this Act Up Portland poster advertising a February 27, 1989, protest against the Federal Drug Administration (FDA). In the late 1980s, activists across the nation protested the FDA, accusing the federal agency of withholding life-saving HIV/AIDS medications through its drug release program. OHS Research Library, Coll 859. Photograph by Kayla Blackman.

Museums, libraries, and cultural institutions have not always been welcoming or inclusive spaces. Capturing these stories and protecting these collections ensures that a crucial community of voices can contribute to our shared history. If you have materials that you would like to consider donating, please contact the Oregon Historical Society’s collections staff.

CAP and Our House have a long history of remembrance. At CAP, staff and volunteers wrote the names of the dead into a memory book. In honor of this exhibition — and because HIV/AIDS is not over — CAP and Our House invite the Oregon community to contribute their recollections to a digital memory book.

I hope you will visit It’s Not Over: 40 Years of HIV/AIDS in Oregon before it closes on August 14. OHS’s museum is open daily, and admission is free to members and Multnomah County residents. 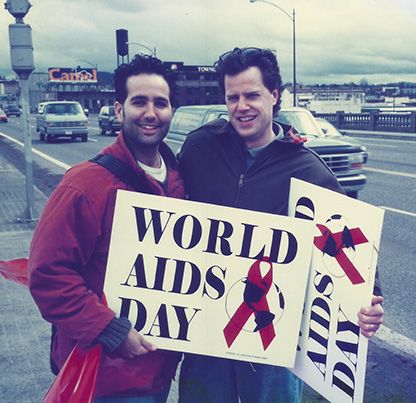 It’s Not Over: Forty Years of HIV/AIDS in Oregon

Nationwide, HIV/AIDS killed more than 700,000 Americans between 1981 and 2021; 4,613 of them lived in Oregon. This exhibit explores the history of the HIV/AIDS epidemic in Oregon with a focus on the work of Cascade AIDS Project and Our House Portland.