On January 22, 2022, the Oregon Historical Society’s museum officially welcomed a new object to its collection, a 1915 Linotype machine that was once used by the “Oregonian” and “Reflector” newspapers. This detail shows the machine’s manufacturer and model. OHS Museum, 2022-3.1. Photograph by Kim Buergel.

The Oregon Historical Society’s (OHS) museum cares for over 75,000 objects that document the history of Oregon, which are separate from the archival and audiovisual materials stewarded by OHS’s research library. Nearly every day, OHS’s museum collections staff receives donation offers from the public through calls and emails. As registrar, I’m one of the first people to talk with potential donors to gather details that help our team make decisions about what offers to accept into the museum’s permanent collections. Donation offers include everyday items such as a canning jar, to items as large as roller coaster cars.

In November 2021, I received a particularly interesting phone call from a colleague at the Clark County Historical Museum (CCHM), with an offer to preserve an important piece of Oregon history — a Linotype machine once used at the Oregonian. The museum’s collection manager, Liza Schade, explained on the phone call that the Linotype was being stored in a building at the Fort Vancouver National Historic Site but needed to be moved by the end of the year due to construction beginning on and around the building. Unfortunately, due to the machine’s size and weight, CCHM couldn’t display it at their facility. 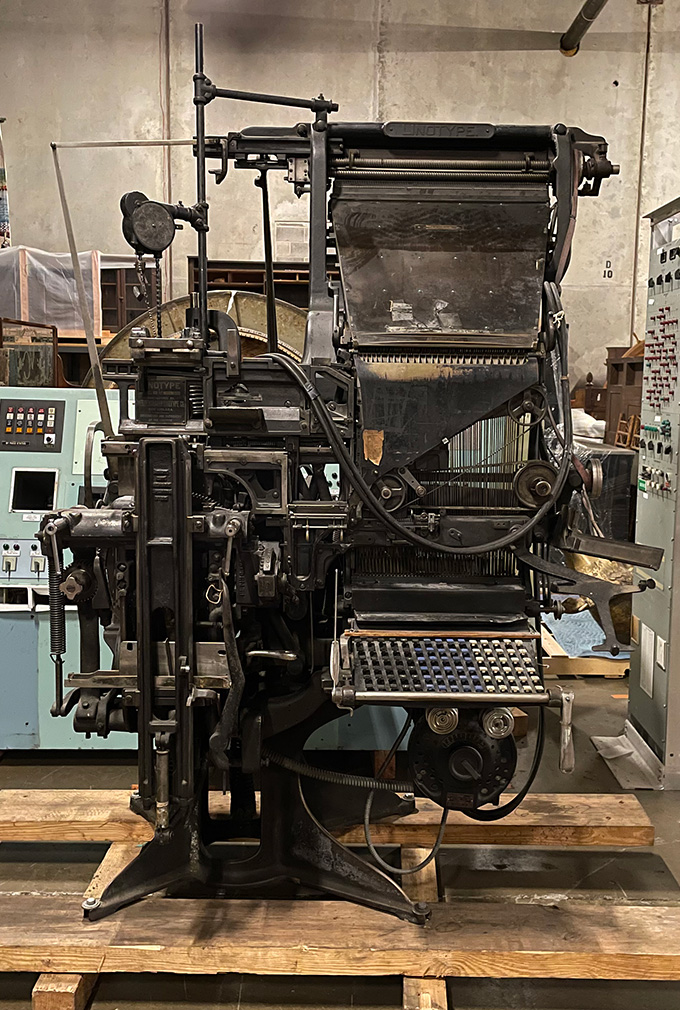 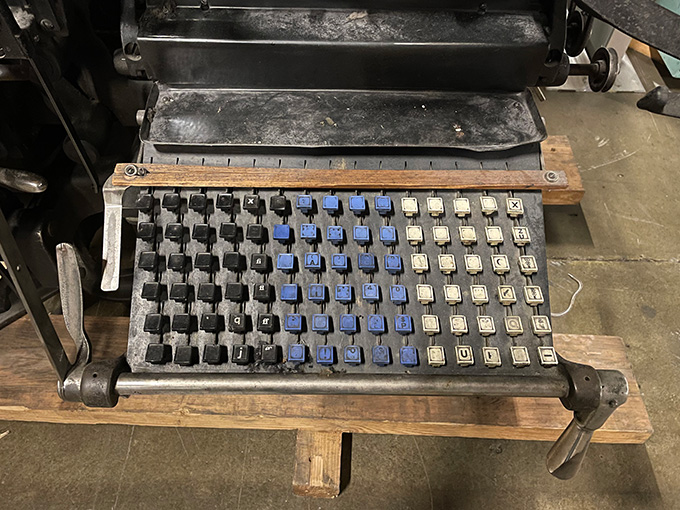 This detail shows the Linotype machine’s keyboard, which was used to set lines of type that could be quickly printed onto multiple pages. OHS Museum, 2022-3.1. Photograph by Kim Buergel.

Linotypes are typesetting machines by which characters are cast in metal as a complete line of text, rather than as individual characters. The name of the machine comes from the fact that it produces an entire line of type at once, creating a “line o’ type” that could be quickly printed onto many pages. Ottmar Mergenthaler patented the Linotype machine in the United States in 1884, and it became the main method of setting type for newspapers, magazines, and posters from the late nineteenth century to the 1970s and 1980s. It was a significant improvement over the previous industry standard of manual, letter-by-letter typesetting. Mergenthaler’s Linotype machine was so revolutionary that Thomas Edison allegedly declared it to be the eighth wonder of the world.

CCHM’s machine is a Linotype Model L, serial number 2006. It measures roughly nine feet tall, five feet from front to back, three-and-a-half feet from side to side, and weighs approximately 3,000 pounds. The Oregonian used the machine from 1917 through 1950. The Reflector, a weekly newspaper based in Battleground, Washington, purchased the Linotype from the Oregonian in 1951 and used it until about 1980. Marvin Case, publisher emeritus of the Reflector, purchased the paper in 1980, and in 2015, he donated this linotype machine to CCHM. According to Case, two Linotype machines were still in use by the Reflector in 1980, although they were somewhat out of date. Case gave one of these two machines to the Clark County Fair in 1985 and kept one on display at the Reflector’s office for visitors to view, until it was donated to CCHM. CCHM arranged to store the machine at the Fort Vancouver Historical Site, until the renovations required the machine be removed.

When I brought the offer to OHS’s museum team, the discussion quickly moved from “yes, OHS definitely should accept this Linotype” to “imagine the headlines printed by this machine!” to “how are we going to move this machine from Fort Vancouver to OHS?!!!” Once I called Schade to give her the good news that OHS would accept the donation, we quickly began planning for the Linotype’s transfer. CCHM arranged for a local moving company to pick up the Linotype machine in Vancouver and deliver it to OHS. A forecasted snow storm delayed the move beyond the December 2021 deadline, but with forklift ready, OHS museum staff members accepted the Linotype machine on the morning of January 14, 2022 — at its new home in Oregon. 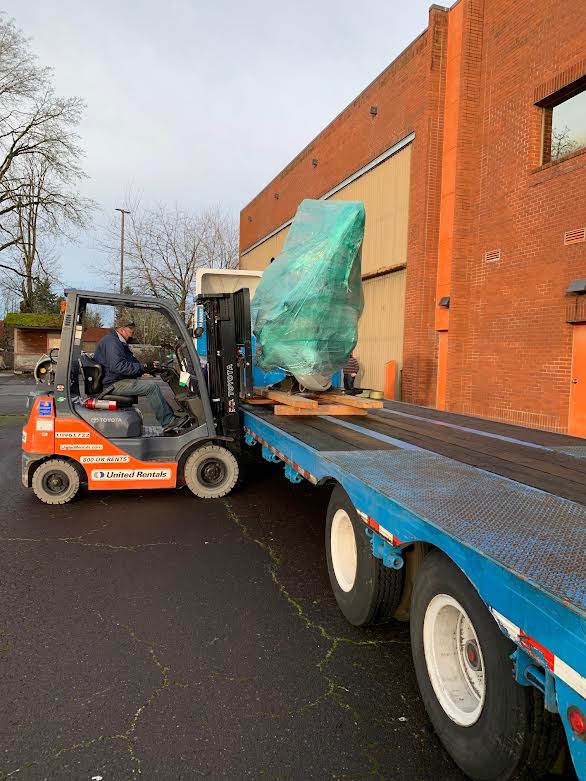 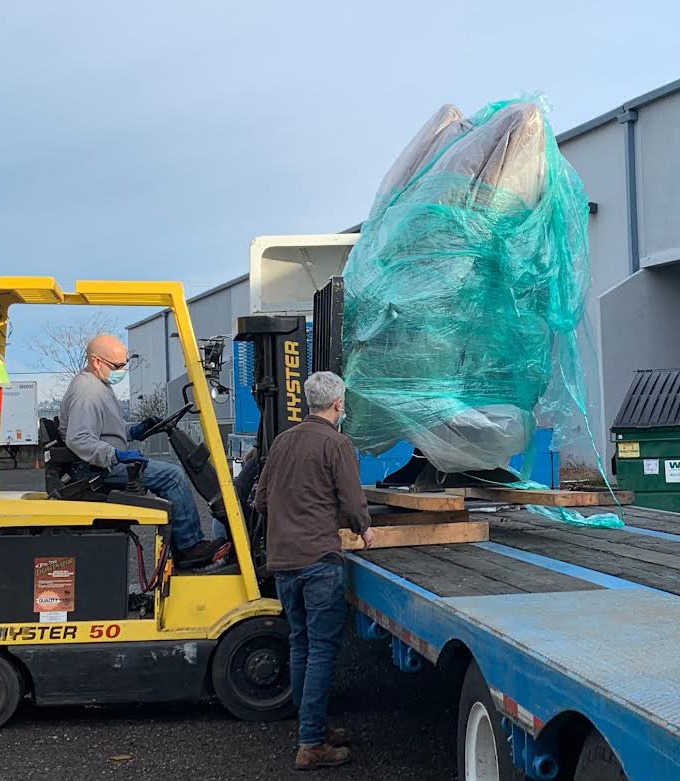 When my colleagues and I moved the machine to its permanent storage location in our climate-controlled facility, it was carefully unwrapped and inspected for any damage or loose parts. Once the donation paperwork was finalized, we assigned the Linotype an accession number (2022-3.1) and created a catalog record that includes a detailed description, dimensions, provenance, the object’s condition, and photographs. This catalog record can now be viewed online on the OHS Museum Collection Portal, making this piece of Oregon history accessible to anyone.