Home Blog Hay-SEE-ta or HECK-ata: How Do You Pronounce Heceta Head?

Spanish explorer Bruno de Hezeta (Heceta) y Dudagoitia sailed along the Oregon Coast in 1775 and passed a large basalt headland, which was later named Heceta Head after him. It is shown here in this undated photo along with the Heceta Head Lighthouse. OHS Research Library, neg no. 55604.

This story begins in 1775 when Spanish Naval officer Bruno de Hezeta (or Heceta) y Dudagoitia left Spain as part of a small Spanish armada to sail to the military port of San Blas New Spain (Mexico). The Spanish government then sent Heceta northward to explore the Pacific Northwest and look for business opportunities to strengthen its claims to the region.

Heceta commanded a fleet of two ships: the frigate Santiago and a smaller schooner named Sonora. The two ships sailed together as far north as the 48th parallel, after which Heceta returned with the Santiago to San Blas, due to his crew suffering from scurvy. After sailing along what is now known as the Long Beach Peninsula, Heceta had just passed a large basalt headland when he saw a sand-colored bay. He noted in his journal that “these currents and the seething waters [lead me] to believe this must be the mouth of some great river or a passage to another sea.” Heceta became the first European to record the location of the entrance of the Columbia River, and in his journal, he named the bay the Bahia de La Asunción, the northern headland Cavo de San Roque (now Cape Disappointment), and the southern entrance Cavo Frondoso (now Point Adams or Tillamook Head). 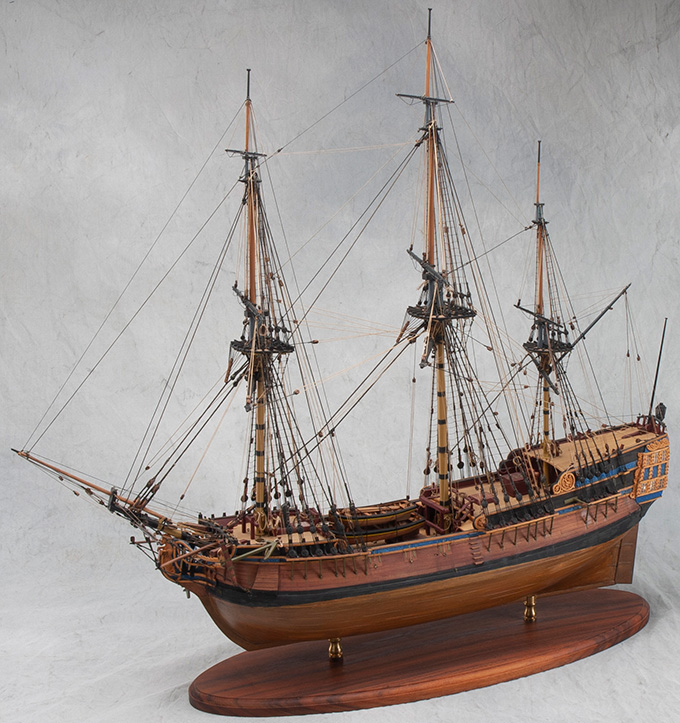 This is a model of the “Santiago,” a Spanish ship that Bruno de Hezeta (Heceta) commanded to explore the Pacific Northwest. The model was built by Lloyd McCaffery in 1975. OHS Museum, 75-34.

In 1862, George Davidson, an engineer for the U.S. Coast Survey (USCS) who supervised the charting of the western coastline of America, named Heceta Head to commemorate the Spanish explorer’s findings. In his publication Coast Pilot, Davidson wrote that Heceta noted in his journal that he passed by this headland on August 17, 1775. Sixty miles out in the Pacific Ocean, Heceta had documented a fifteen-mile-long submerged sand bank, which was later confirmed by the USCS in 1853 and named Heceta Bank. Eventually, the Heceta Head Lighthouse and Heceta Beach were also named after him.

And here is where we reach the puzzle in this story. While following this narrative, how were you mentally pronouncing Heceta? Were you thinking it was Hay-SEE-ta, or Hay-ZEE-ta, or HECK-a-ta? Perhaps ay-THAY-ta, as it would be pronounced in Castilian? 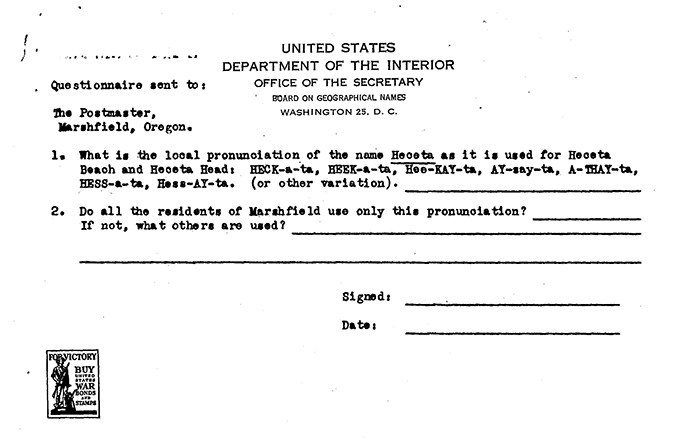 On the second page of Meredith P. Burrill’s October 22, 1943, letter, is a two-question form that seeks information about the pronunciation of Heceta Head. Image courtesy of U.S. Board on Geographic Names.

For example, Meredith P. Burrill, director of the U.S. Board on Geographic Names, sent questionnaires to both the Marshfield and Yachats postmasters. The questionnaire read: 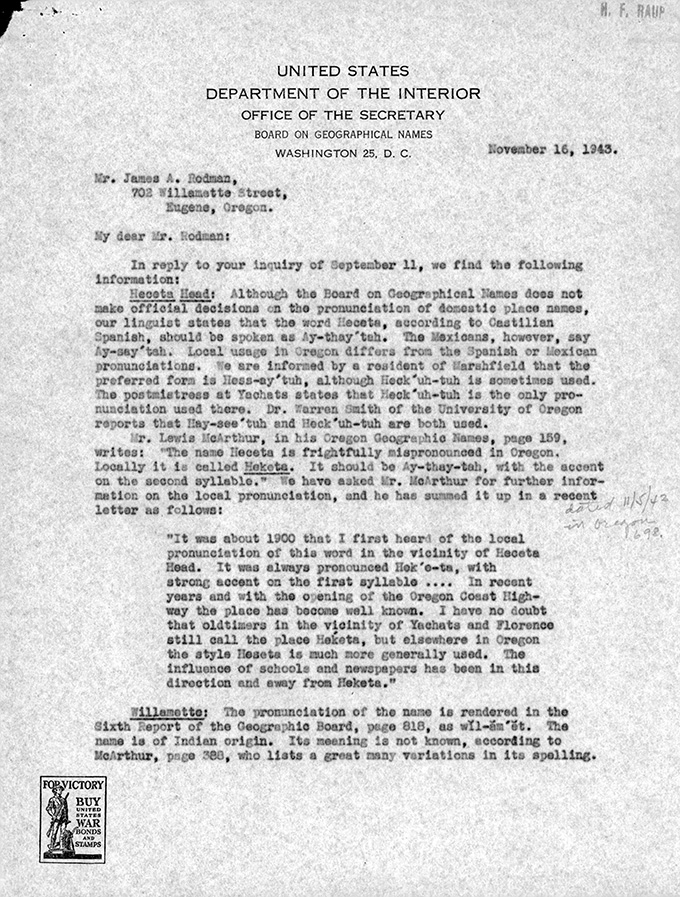 On November 16, 1943, Burrill summed up the matter in a letter to realtor James A. Rodman, who had inquired about the pronunciation of Heceta Head as well as Willamette in a September 11, 1943, letter:

Although the Board on Geographical Names does not make official decisions on the pronunciation of domestic place names, our linguist states that the word Heceta, according to Castilian Spanish, should be spoken Ay-thay’tuh…. Mexicans, however, say Ay-say’tah. Local usage in Oregon differs from the Spanish or Mexican pronunciations. We are informed by a resident of Marshfield that the preferred name is Hess-ay’tuh, although Heck’uh-tuh, is sometimes used. The postmistress at Yachats states that Heck’uh-tuh is the only pronunciation used there. Dr. Warren Smith of the University of Oregon reports that Hay-see’tuh and Heck’uh-tuh are both used….

…Mr. Lewis McArthur, in his Oregon Geographic Names… writes: “…Locally it is called Heketa. It should be Ay-thay-tah, with the accent on the second syllable.” We have asked Mr. McArthur for further information on local pronunciation, and he summed it up in a recent letter as follows:

“It was about 1900 that I first heard of the local pronunciation of this word in the vicinity of Heceta Head. It was always pronounced Heck’e-ta with a strong accent on the first syllable…. In recent years and with the opening of the Oregon Coast Highway the place became well known. I have no doubt that oldtimers in the vicinity of Yachats and Florence still call the place Heketa, but elsewhere in Oregon the style Heseta is much more generally used. The influence of schools and newspapers has been in this direction and away from Heketa.”

Perhaps McArthur was right, but it should be noted that in Alaska, Heceta Island is pronounced HECK-ah-tah Island. I would say that the puzzle remains incomplete. Below we have included a few additional items from the U.S. Board on Geographic Names records that might be of interest for further reading.

In response to a letter from Meredith Burrill of the U.S. Board on Geographic Names, Warren D. Smith, then a professor of geography and geology at the University of Oregon, discussed his understanding of the local pronunciation of Heceta Head.

On November 5, 1943, Lewis A. McArthur, then secretary of the Oregon Geographic Names Board, wrote to Meredith F. Burrill, director of the U.S. Board on Geographic Names, to explain local pronunciations of Heceta Head and their origins.