Hallie Heacock carved this snake swallowing a frog in 1949. He noted the “twisted” piece of scrap wood came from the St. Helens Pulp and Paper Mill. This carving took nine hours to carve and paint. OHS Museum 71-56.73.

On October 24, 2020, the Oregon Historical Society (OHS) opened an exhibit, The Carvings of Hallie Heacock, featuring items carved, etched, and sketched by Hallie Heacock between 1904 and 1966. Heacock was born in Parsons, Kansas, in 1881 and spent time in Alaska, Canada, Washington, Idaho, and Montana before settling in St. Helens, Oregon, in the 1920s. He lived in Oregon until his death in 1968. As a Boy Scout leader and a longtime employee at the St. Helens Pulp and Paper Mill, people remember Heacock for his carvings. Heacock bequeathed his collection of over 160 items to OHS, and a selection of those items are on view in the exhibit. *

While Heacock carved on wood that he acquired from around the world, some of the wood in his collection was local, including scraps of wood from the St. Helens Pulp and Paper Mill. He also took inspiration from the mill’s façade and used it as a subject for some of his sketches. As co-curator for The Carvings of Hallie Heacock, I spent a good deal of time researching Heacock and became interested in learning more about the St. Helens Pulp and Paper Mill, where Heacock worked from 1933 until his retirement in 1951.

Papermaking is dependent on two main ingredients: water and wood. This made Oregon and the Pacific Northwest an ideal locale for the pulp and paper industry. The first mill in Oregon to use ground wood pulp for paper was the Falls Pulp Company in Astoria, located along the Youngs River. The mill was built in 1884, incorporated in 1887, and workers there used spruce wood as their pulp source. A sample of the pulp from this mill took first place in a pulp competition at the 1893 World’s Fair in Chicago besting pulp samples from East Coast mills. Between 1866 and 1948 numerous pulp and paper mills were founded in Oregon and across the state border in Camas, Washington. These mills specialized in different paper and pulp products, including newspaper, wrapping paper, carpet paper, Kraft paper, and manila paper. The timeline below gives a brief overview of these mills. 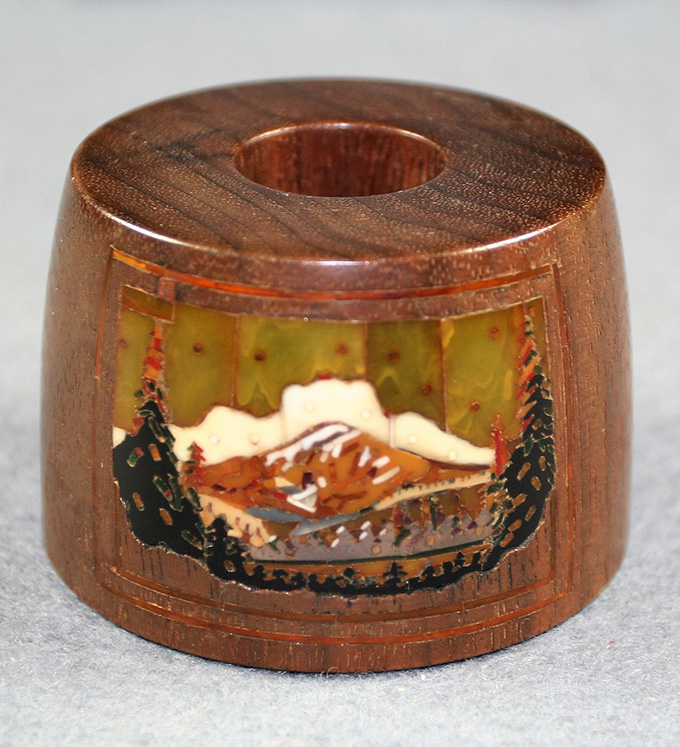 For this 1938 mosaic, Heacock carved a wooden plug used to plug paper rolls. The inlaid design is the trademark logo the mill used on its paper labels, which are pictured in the slideshow at the end of this post. OHS Museum 71-56.123. 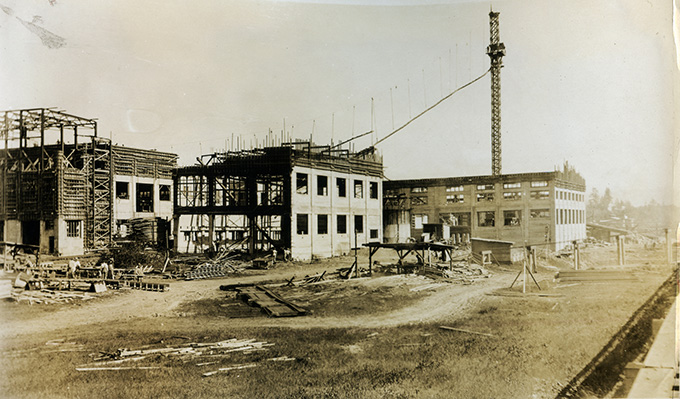 Hamlin F. McCormick and W.P. Hawley of Hawley Pulp and Paper Company founded the St. Helens Pulp and Paper Company in 1925 and hired Max Oberdorfer from Michigan as the general manager of the mill. Oberdorfer designed the first Kraft pulp mill in the United States, and he was in charge of the design and construction of the St. Helens mill, starting in 1926. Kraft is the name for the process to make Kraft pulp — a type of wood pulp that is made when specific chemicals are added to the wood digesters during the cooking process. Kraft pulp makes high-strength paper products that do not tear easily. Kraft paper is used to make brown packing and wrapping paper as well as paper bags. In January 1927, the mill produced Kraft paper for commercial sale. Production went well, and by the end of 1927, the mill was producing 60 tons of Kraft paper a day using one paper machine, a wood processing plant, a steam plant, and a sulphate pulp mill.

In 1928, the St. Helens Pulp and Paper Mill acquired the California Bag and Paper Company of Emeryville, California, and moved its machinery for making paper bags to St. Helens. The mill started producing paper bags six months after the acquisition, with forty bag machines producing three million paper bags every eight hours. By 1931, the St. Helens Pulp and Paper Mill had added a second paper machine and became the first company in the United States to perfect the process of bleaching brown Kraft paper to make white paper, and to sell white paper commercially. Workers developed a semi-bleached paper, trade named “Kranila,” at the mill. 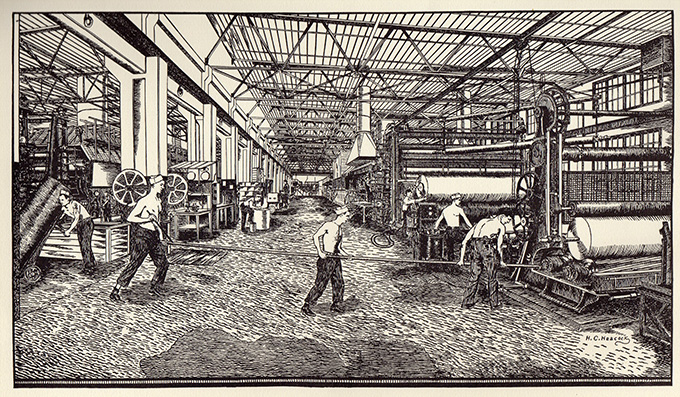 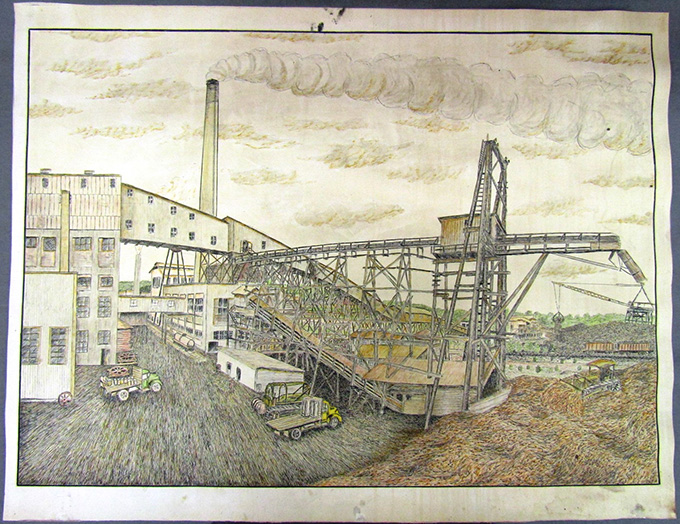 Although Hallie Heacock is known for his carvings, OHS’s museum collection also includes a few of his sketches, including this one, which depicts a section of the St. Helens Pulp and Paper Mill exterior from about 1935. OHS Museum 71-56.54.

The St. Helens Pulp and Paper Mill continued to be a major employer in St. Helens until the late 1970s. In 1977, the mill celebrated its 50th anniversary with a special behind-the-scenes tour of the mill and property. Hallie Heacock’s 1935 pen and ink drawing was featured on the cover of the tour booklet. Although the bag factory closed in 1974, the mill is still in operation, just on a much smaller scale making tissue paper instead of pulp and specialty paper.

The Carvings of Hallie Heacock, on display through February 14, 2021, not only documents Heacock’s hobbies and personal memories, it also provides tangible evidence of Oregon’s long history with producing pulp and paper products. You can view a few items from the collection on the exhibit web page, and explore below some early images of the St. Helens Pulp and Paper Mill.

Early aerial photograph of the St. Helens Pulp and Paper Mill with logs floating down the Columbia River. The logs were brought into the buildings to be cut into small sized chips, free of bark, before the chips were sent into the plant for processing.

Aerial of St. Helens Pulp and Paper Mill after the bag factory building was built in 1928. The bag factory is the bottom left building.

This 1939 aerial photograph documents the St. Helens, Oregon, industrial area. From bottom to top of the image are: Fir-Tex, Pope & Talbot, and St. Helens Pulp and Paper Mill.

The photograph shows women working in the St. Helens Pulp and Paper Mill bag factory in about 1936. In this image, the women are adding handles to bags with printed logos. Women were hired to work in the bag factory or in clerical jobs at the mill.

This is the paper label and the trademark logo for the St. Helens Pulp and Paper Mill. Heacock made a mosaic of this logo in a paper roll plug.

Workers are pictured inside the St. Helens Pulp and Paper Mill during the process of turning pulp into paper.

A worker at the St. Helens Pulp and Paper Mill adds ingredients to the pulp in about 1940.

*In  accordance with the statewide freeze issued by Governor Kate Brown on Friday, November 13, 2020, the Oregon Historical Society’s museum is closed until further notice, in an effort to help slow the spread of COVID-19 within our community. Please visit ohs.org/washyourhands for the latest updates on museum operations and for more ways to explore our exhibitions online.