Photographing Oregon’s landscapes during the 19th and early 20th centuries often required photographers to come up with creative engineering solutions to take their fragile camera equipment on the road. In this photograph, William L. Finley and Herman Bohlman drive their “Modern Prairie Schooner,” a traveling photography studio, which allowed them travel to remote regions of eastern Oregon while documenting birdlife and overhunting conditions around Malheur Lake in Harney County, Oregon. OHS Research Library, Org. Lot 369, A2299.

Photographers documenting Oregon’s landscapes during the 19th and early 20th centuries captured images that were as much technical as they were artistic accomplishments. In the early years of photography, the art form was largely a do-it-yourself, experimental venture when few off-the-shelf, commercial photography products were available. Photographers usually constructed their own cameras and mixed the chemicals to coat their glass plate negatives. There were a number of technical challenges that stood in the way of making a good photograph. In addition to the inherently fragile nature of the glass plates used to capture images, the photographic process was also sensitive to dust, temperature, and light.

As photographers looked beyond the studio, toward landscape and nature photography, they had to be creative in engineering solutions to take their fragile cameras and studios on the road. In this post, we’ll look at four early Oregon photographers and their creative solutions for building mobile photography studios.

In 1867, Carleton Watkins traveled north from San Francisco, California, to photograph areas around Portland and the Columbia River Gorge. The Oregon Steam Navigation Company sponsored a part of his trip with the intention that he would document and promote its new routes up the Columbia River. By the time Watkins traveled to Oregon, he had already established himself as a landscape photographer with his photographs of Yosemite’s dramatic landscapes in central California. Few other photographers at the time were able to produce such large and artistically composed photographic prints. 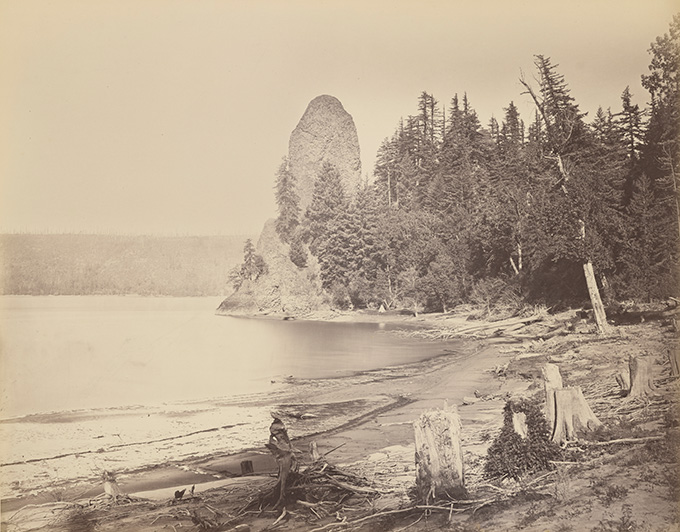 Watkins took this photograph of Rooster Rock during his 1867 photography expedition up the Columbia Gorge. His darkroom tent and riverboat are visible at the base of the rock formation. OHS Research Library, Org. Lot 93, Mammoth 418. 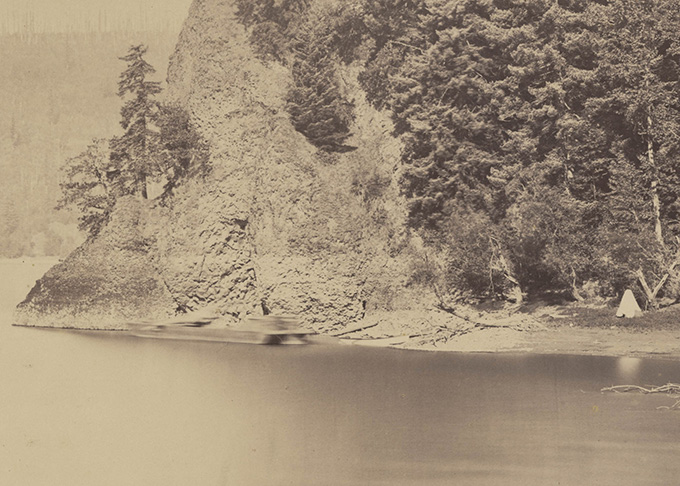 In this detailed view of Watkins’ photograph of Rooster Rock, you can see his darkroom tent on the right, and to the left is a blurred image of the riverboat used to carry his photography supplies upriver. OHS Research Library, Org. Lot 93, Mammoth 418.

During this early era of photographic technology, photographs could not be easily enlarged. This meant that the glass plate for the negative had to be the same size as the resulting print. At a time when most prints were only a few inches wide, Watkins worked to perfect the wet-plate process on increasingly larger plates of glass. For his landscape photography, Watkins had a custom camera constructed to accommodate eighteen by twenty-two-inch glass plate negatives. This camera became known as Watkin’s “Mammoth Camera.” It was a fitting name for the cumbersome 100-pound telescoping cabinet that measured thirty inches on each side, and with a length of three feet at full lens extension.

Despite its mammoth scale, Watkins transported the camera, a darkroom tent, and the fragile glass plates across some of the most rugged terrain on the west coast of North America. During his 1867 expedition, Watkins used a riverboat to carry his equipment up the navigable portions of the Columbia River, stopping at intervals to set up his dark room and document the landscape. By the time Watkins returned to the Gorge again in 1882, he was able to photograph the region with far more ease, living in a Pullman-style railcar and carrying a horse-drawn photographic field van on an accompanying flatcar. This studio on rails opened Watkins’ work to anywhere along the rapidly expanding network of railroad lines.

For Portland area amateur photographers at the turn of the twentieth century, the once arduous trip up the Columbia River became a popular summer tradition. The Oregon Camera Club promoted their regular outings up into the Gorge as a healthy and enjoyable form of recreation. Lily E. White was an active Camera Club member, and she frequently showed her photographs in art salons and served as a demonstrator to help teach other club members the art of photography. 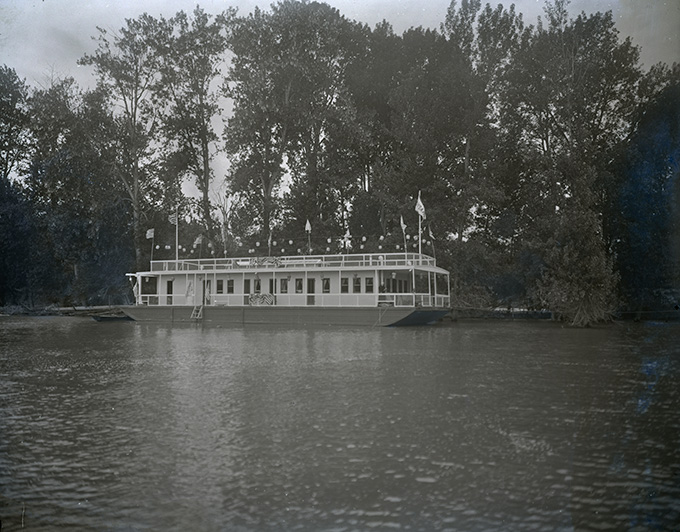 Lily White’s houseboat, the “Raysark,” served as a floating home and studio on the Columbia River. In this photograph, an unidentified woman stands on the deck of the boat as it is tied among trees on the river bank. A triangular banner with the ship’s name flies alongside American flags and bunting from the deck railings. OHS Research Library, Org. Lot 1415, LW1-019. 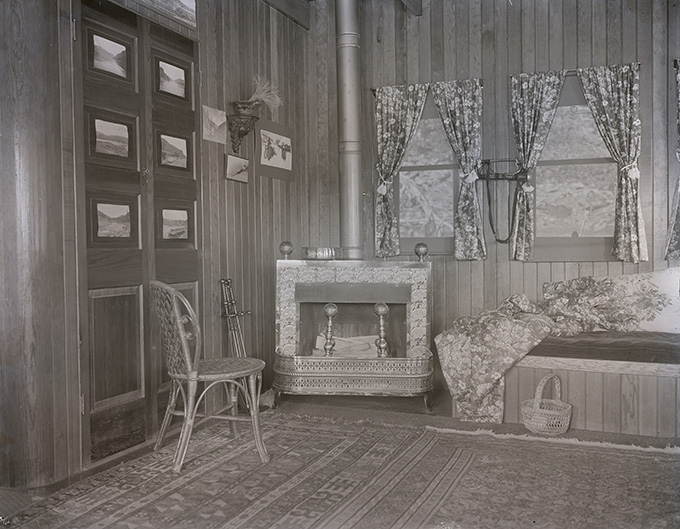 The Staterooms on the “Raysark” offered luxurious accommodation for White and her guests, complete with all the comforts of home. Prints of several photographs attributed to White and her collaborator, Sarah Hall Ladd, are visible hanging on the wall. OHS Research Library, Org. Lot 1415, LW1-021.

In 1903, White had a custom house boat commissioned to facilitate her extended trips up the Gorge. White christened her boat, the Raysark. In a 1906 Pacific Monthly feature, the Raysark was described as having “an ample and luxuriously appointed cabin, six staterooms, bathroom, dining cabin, galley, a three-ton ice chest, linen closet, and many other closets and conveniences.” Among those conveniences was a state-of-the-art dark room. The Raysark allowed White and her guests from the Oregon Camera Club to comfortably live and photograph on the river for extended periods.

When William Finley and Herman Bohlman ventured into the remotest corners of Oregon with their cameras, they focused their lenses on the state’s birds rather than its sweeping landscapes. The duo loaded their studio equipment in wagons, canoes, and even on bicycles to document the birdlife in all corners of the state. For their series of photographs of nesting birds, they even hoisted their studio into the sky by using ropes and pulleys to set up their camera equipment in the treetops. In 1908, Finley and Bohlman converted Bohlman’s White Steamer automobile into a rolling camper and photography studio. Storage panels built into the sides housed their equipment, fold out tables allowed space to work, and custom cushioned benches could be refashioned into beds at night. The heavy canvas tarping that replaced the roof and sides of the auto inspired Finley and Bohlman to dub the touring car their “Modern Prairie Schooner.” 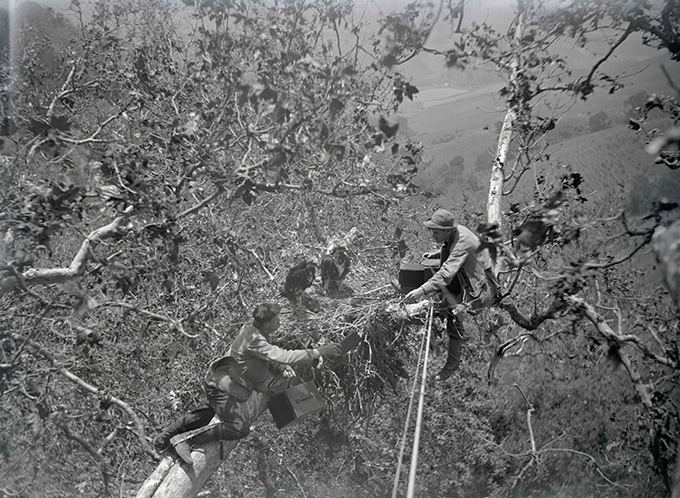 Without the aid of modern telephoto lenses, William Finley and Herman Bohlman had to move their studio into the trees to capture images of nesting birds. Using ropes, pulleys, and determination, the duo hoisted their camera equipment into the treetops for this series of photographs documenting the development of juvenile eagles. OHS Research Library, Org. Lot 369, A0441.

Before they had their auto studio, William Finley and Herman Bohlman would often pack their camera and studio equipment onto bicycles and head out in search of birds to photograph. Oregon State University Special Collections and Archives Research Center, P202, Box 10, 008.

Today, Finley and Bohlman are remembered as both nature photographers and environmental activists and were active with the Audubon Society of Portland. They used their photographs to bring attention to precarious position of Oregon’s bird populations due to overhunting. Among several other accomplishments, their advocacy was instrumental in the establishment of the Three Arch Rocks, Klamath, and Malheur National Wildlife Refuges.