Gertrude Jensen (right) presents before the State Parks Commission in 1955 regarding the Columbia River Gorge protection plans. From the 1940s until her death in 1986, Jensen was a leader in protecting the gorge. OHS Research Library, OrHi 86990

Today we’re unearthing a story from Gertrude Glutsch Jensen, aka The Angel of the Gorge. She started her professional life as a reporter for both the Oregonian and the Oregon Journal but finished it as an ardent advocate for the preservation of the Columbia River Gorge. The following excerpt (that we lightly edited for clarity) is a tale Jensen told during a 1977 interview conducted by Roberta Watts (SR 9452, tape 1, side 1). In the interview, Jensen describes the momentous events that got her started in her decades long fight for the gorge.

Jensen: Well, coming back to how I got interested in the [Columbia River] Gorge conservation, I called up the bus company to see if I could go on the bus up there. They said, yes, they had some tours, one of them was this Columbia Gorge Tour. I took my mother [who had been ill for many years] down to the Multnomah Hotel, which was the pickup place for the Gray Line. The driver helped me to put her on the bus. We took a taxi down from our home here in Laurelhurst. She was kind of unresponsive and didn't smile. She knew she was on the bus and so forth, and I tried to get her interested in things.

When we got up there to Multnomah Falls Lodge, everybody got out of the bus, and the driver came back to me and helped me with my mother to get her out of the bus. When she got down off the bus, she looked up at the falls and she smiled, the first time in all this long time. She smiled and she threw a kiss and she spelled out b-e-a-u-t-i-f-u-l. The tears came to my eyes. I couldn’t hardly believe it that she’d smiled, and that there was something in life that she loved that she saw again. From then on, she improved and she got well. For many years she was herself again. Not many years, but it was two or three years. 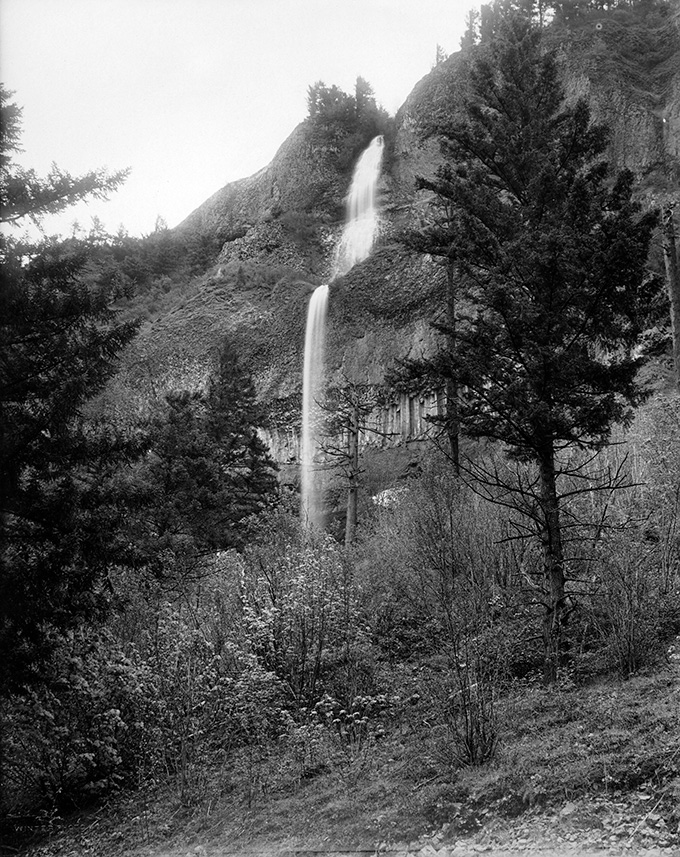 When we got home, I decided I was going to buy a car and take her out. I took her out every day, rain or shine, until she died, for a drive [when] I bought this car, and the first place I went was up to the [Columbia River] Highway. Just below Mist Falls, which, by the way, is twice as high as Multnomah Falls. It’s about 1,200 feet high. It was named by [Meriwether] Lewis and [William] Clark. Mist Falls. I noticed a logging operation there. I didn't know that they were logging. I thought that maybe they were relocating the road. Then I got to thinking about it, I better go up there again and see what they were doing.

I started the car, I had my mother with me, and drove a little way. My mother, she sat in the car and I walked up to where this little shack was, where the logging operations were. I said, “Hello? Hello? Anybody here?”

I said, “I just want to know what is going on here. Are they building another road? Another Columbia Highway?”

He said, “No!” He said, “We’re logging.” And he said: “This man bought all of this land here, and we’re going to log the whole thing. Up above, all that land has been bought for delinquent taxes and that’s all going to be logged.”

That was the watershed for Wahkeena Falls. To think of all that beautiful blue-green fir! You know, the hardwoods come up quickly in the gorge. They’re all fir trees, they’re broken off by the ice storms and things, and then also the [black root?] firs come up quickly in the gorge, and they don't get the sunlight. They had a hard time getting there in the winter storms down the gorge. So, the fir trees, that beautiful blue-green in the gorge, was rapidly being logged, I found out.

So, I went to the [Portland Women’s] Forum, of which I'm a member. I'm a life member, by the way; I was given a life membership. I reported to the board what I had seen. Right away Mrs. Howard Arnest, president, appointed me chairman of the Save-The-Gorge Committee. I called a meeting right away, and then we met with the Natural Resources Committee of the Chamber of Commerce. And the Chamber of Commerce boardroom — that was one of those upstairs, not down. They couldn't believe [the] land was being sold for delinquent taxes, and that these loggers were using those trees for — although they weren't good trees, they could be used for wood chips.

So, come to find out — I looked up in the records there and spent days and days with Gertrude Dunn, another member of the committee, looking in the records — thousands of acres had been sold up there in the Gorge for delinquent taxes. The county didn't keep that land. And on that land, a good part of it from the Sandy River up to the forest boundary at Wahkeena Falls, and the remaining parcels of land up in the Columbia Basin at the Multnomah Falls Basin, were sold for three and four dollars an acre with timber growing on, for $7 and $8 an acre down along the highway….They sold it to private individuals. Our committee was just a fact-finding committee. It came out in the paper, and I had a hearing before the County Commissioners.

More of Jensen’s interview can be found on OHS Digital Collections, SR 9452.